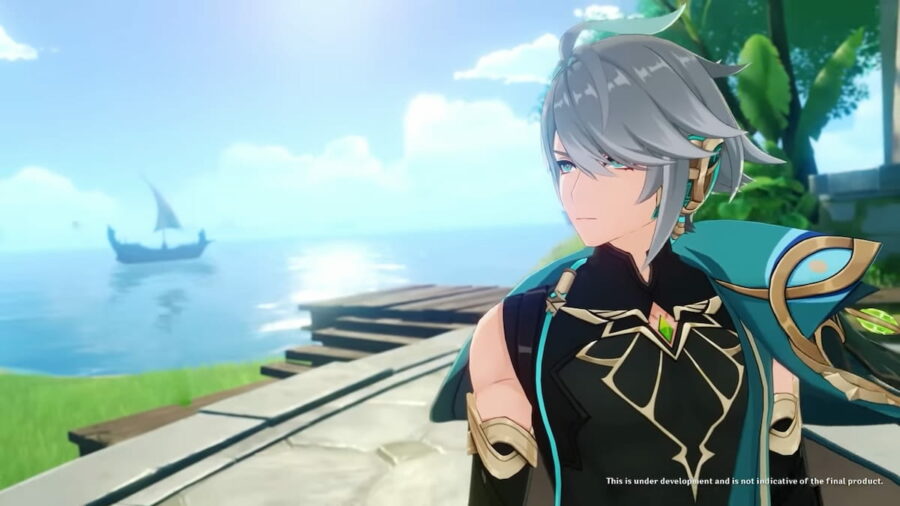 Genshin Impact gave us glimpses of Alhaitham in trailers before the Sumeru's release, and he had a fair amount of screen time in Chapter Three of the Archon Questline. What more do we know about this upcoming Dendro sword user?

Who is Alhaitham in Genshin Impact?

His official title is Scribe, and he's a member of Sumeru's Akademiya. What's strange is many characters from the Akademiya don't associate with him very much or steer clear of him altogether. Tighnari has this to say about him in his About Alhaitham voice line: "Be careful of Alhaitham. I'm not saying he's a bad guy, but he purely operates by rationality, so people often find his actions unacceptable. If you don't believe me, just ask his housemate. Thanks to Alhaitham, his housemate has more pent-up frustration than an angry Anemo Slime."

Alhaithaim certainly practices some unacceptable actions during the Archon Questline. He and the main character meet with Mizri, the leader of Ayn Al-Ahmar. She goes insane during the meeting while trying to use a Divine Knowledge Capsule. Alhaitham quickly neutralizes him when this happens, and Akademiya officials then come to arrest Mizri. Just before they do, Alhaitham steals the Divine knowledge Capsule for himself while no one looks.

Is Alhaitham from Genshin Impact named after someone?

Potentially. When the character's name was released, history buffs and fans of Genshin Impact were quick to point out that his name is very similar to Ibn al-Haytham, an Egyptian mathematician, and scientist from the tenth century. He's known as the father of modern optics and is credited with discoveries that greatly furthered the field of optometry. Is it possible that HoYoverse chose Alhaitham's name due to this scientist's work with vision? Could Alhaitham also be particularly interested in Visions? Possibly, but only time will tell.

Does Alhaitham from Genshin Impact look like Su from Honkai Impact 3rd?

He sure does. Before any Sumeru character's release, a leak arose that Sumeru would feature another Honkai Impact 3rd expy. An "expy" is an export of a character from one of HoYoverse's prior titles, like Yae Miko and Ei being exports of the characters Yae Sakura and Raiden Mei. Alhaitham is definitely the expy of Su. However, fans of both games have been quick to point out that Alhaitham and Su's personalities do not share as many similarities.

Related: What is the giant floating pyramid you can see from Sumeru in Genshin Impact?

Have there been any more leaks about Alhaitham from Genshin Impact?

Now that Alhaitham has been seen in the game, most remaining leaks center around his kit or his potential release, both of which are very subject to change. There have also been some interesting leaks regarding Alhaitham's roommate, the one Tighnari mentions in his voice line about Alhaitham. Reliable leakers have let us know that his roommate's name is Kaveh. He may be introduced as a new Sumeru character later this year despite having yet to appear in the game.

When will Alhaitham become playable in Genshin Impact?

You may have been waiting for this character for quite some time. Reliable leakers have recently come out with potential roadmaps of banners through Version 3.4, and Alhaitham has not been included. We expect him to arrive in the game similarly to how Yae Miko did after the Inazuma region came out. Maybe by Version 3.6… Hopefully?

Looking for info on other characters from Sumeru? Check out Who is Kusanali in Genshin Impact? and Genshin Impact – All Sumeru Characters (Confirmed) here at Pro Game Guides.

Who is Alhaitham in Genshin Impact? Everything We Know including Lore, Looks, and Leaks