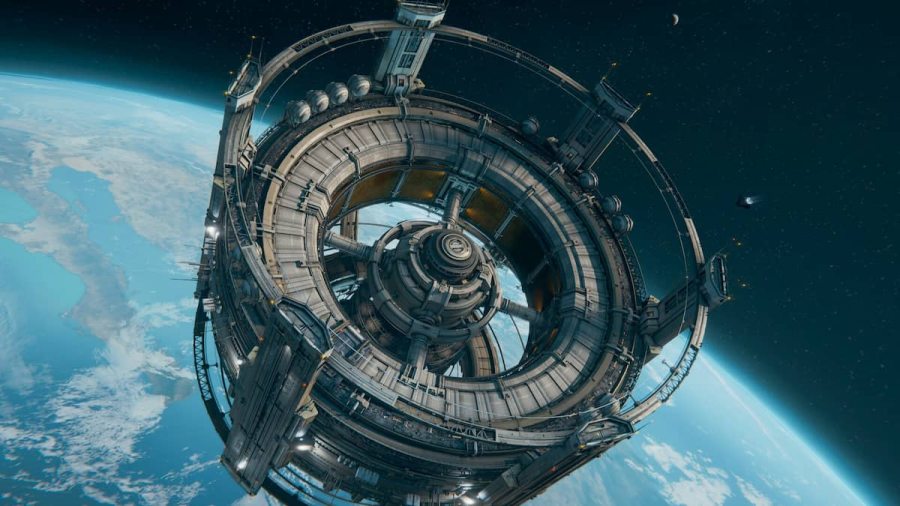 Game developers, especially strategy game makers, often try to pick the best elements from successful titles to emulate in their video games. The creators of Ixion have also tried to replicate the same formula by taking inspiration from popular survival-builder titles like Frostpunk and They Are Billions into their new game. Unfortunately, instead of making a superhit commercial title, they have ended up with a product that may be loved by hardcore strategy players and hated by the casual audience due to its unbalanced gameplay.

Though Ixion is a strategy-based simulation game, it has a well-written storyline woven between its complex gameplay. The Earth is in its final days, and as a part of a fictional organization called Dolos, you are supposed to search for other habitable planets using your spaceship Tiqqun. While preparing for your expedition, you accidentally destroy parts of the Moon, eventually triggering the destruction of Earth due to natural calamities. The rest of the story revolves around dealing with all your guilt for destroying everything back home and whether you can find a planet for your remaining few hundred crew before the hull corrodes.

Even though it sounds like a cliché tale from famous Hollywood flicks, it is unique in its presentation and narration. With beautifully written dialogues/cutscenes explaining the emergency of the grave situation. The few characters we meet, like the head of Dolos, are well-integrated and provide a purpose to the arc rather than simply appearing for the sake of it. Also, as you proceed, the storyline further thickens as you get to know the secrets of Dolos and the ultimate purpose of your journey. The climax part of the story is the best out of everything, as it is convincing enough to justify my 50+ hours of game time. Plus, to increase replayability value, the developers have included an alternative ending to the default one.

While the story and narration are top-notch, it is a linear experience and may come as a turnoff for players expecting a variety of narrative choices that will lead to multiple outcomes.

From the start, Ixion looks and plays like any traditional city builder in the market. As the chief administrator of your spaceship Tiqqun, you must keep trust and stability within your crew members by providing them with all the basic amenities while searching for a new planet. You achieve this with common gameplay elements found in strategy games, like resource management, research upgrades, and layout planning. The gameplay is solid, and all the features work as intended. But there is a big problem: the game is insanely tough. To be precise, it's so rough that many players will leave right after chapter 2.

The main reason players would quit is the unavailability of adjustable difficulty settings, and the one available throws unnecessary and frustrating hurdles beyond your control to hinder your progress. For example, there can be permanent trust-decreasing stat due to storyline incidents or randomly generated accidents in any one of the buildings. Everything feels like it is curated to make new players ragequit. Plus, you cannot ignore these random shenanigans as they often come back to bite you later in the game, ultimately resorting to backtracking and replaying several hours of a particular chapter.

On top of these, flawed design and writing ideas further increase the difficulty factor. For instance, you would expect the last set of people to be hardworking and focused. Instead, the game declares most individuals on the ship as non-workers who hoard building spaces and eat food for free. They cannot be trained to learn skills or cruelly ejected to give space. This contrasts Frostpunk, which allows players to send children to work. Even simple things like transferring resources are made quite difficult for no reason, as you cannot share raw materials by default between each sector unless you invoke the import/export parameters. Additionally, vital features like implementing sector policies are available so late in the mid-game that they become redundant and serve as mere fancy buttons.

Right from the starting cutscene, Ixion looks and feels like a premium strategy game with AAA graphic qualities. Everything from the planets to the interiors are well rendered and never looks distorted or bleak from any angle when zoomed in. Apart from the appearance, the game is also animated pretty well. Especially the ship and building models, as they have unique animation based on their current status. For example, you can find people working on a ship if they are under maintenance in the dock area. Little details like these add flair and increase the immersion value of Ixion.

The other major highlight in terms of visuals is the illumination of the sectors, as they are neither too bright nor too gloomy but have a balanced tone that matches the vibe of a space survival game. The UI of the game is also pretty neat, unlike most strategy games that clutter the menu with unwanted toolbars and stat bars that you won't need for the majority of the game. I mainly liked the separate buttons for the three playable areas as they helped me to navigate quickly between them and solve pressing issues without much hassle.

Related: How to use Space Probes in Ixion

Music and sound design are two aspects that Ixion does not compromise on. The original score is perfectly composed to match the tempo of the surroundings in every scenario. Let it be the gloomy theme to showcase the destruction of the Moon or the synth-based music played while we ascend down to expand the human civilization along the Ashangites. Everything feels natural and elevates the scene to the next level. The home screen music is also so addicting that you may be inclined to spend some extra minutes on the menu before hopping inside a game. Even if you don't buy or play the game, I highly recommend you listen to or at least skim some parts of the original playlist from YouTube if you are a fan of the Synth/Electronic genre.

The sound design for the game is also equally brilliant. Each game mechanism has a unique sound that depicts its functionality perfectly. For example, you can hear the pouring of molten iron in the steel factory, bringing more life to the overall atmosphere. Even cut scenes like moving your spaceship Tiqqun are composed well and never look artificial or unmatched by the sequence of engine bursts.

Though there aren't many characters in the game, the dubbing of the ones making an appearance is crisp and conveys their mood and intention. The standout from the lot was the voice acting of Dolos CEO Vanir Dolos, as the actor perfectly portrayed a fictional version of a desperate CEO trying his best to save human civilization.

Verdict - Casuals can pass this one

Ixion has moments in the form of a good story, excellent sound score, and quality visuals. Other times it can be a harsh game, and combined with its few gameplay design flaws, it becomes extremely unwelcoming for new players stepping into the world of strategy games. Due to this, we recommend Ixion for the veterans of the strategy genre who would be better suited to face such rough challenges. For casuals itching to play simulation-based strategy games, you can pass this one and go for other hits of 2022, like The Wandering Village or Land of the Vikings, that are more beginner friendly.

We received this code from Bulwark Studios for reviewing purposes.

For more on Ixion, check out How to maintain hull integrity in Ixion or How to transfer resources in Ixion on Pro Game Guides.