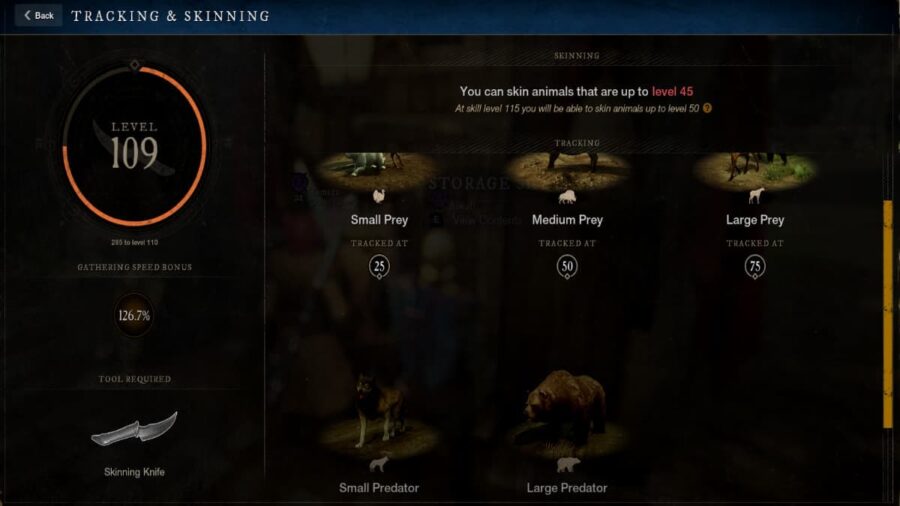 To level up tracking and skinning in New World, you will need to farm the largest animals you can both track and skin. First starting out in New World, it's going to be both boars and wolves, and luckily, you can find them in large numbers in most of the starting areas.

For wolves, check dens around first light and Monarch's Bluff and farm them regularly, and make sure to skin each one you kill. Every time you skin an animal, it will add XP depending on your skill or the buffs on your armor or tools.

So ideally, if you want to gain extra XP for harvesting animals, the first step is to get a skinning step that has the perk that gives it. You can get a skinning knife with a bonus XP gain for tracking and skinning by crafting multiple iron skinning knives and adding azoth while crafting it. Combine this with high levels of dexterity, and you will 100 percent become a master hunter.

That said, as you bet better at hunting and skinning animals, you will eventually unlock the ability to hunt larger prey and predators. When this happens when recommend hunting Lynx and focusing on them.

Lynx can give tons of XP for tracking and skinning mid-game to late-game, so you can't go wrong from farming them. If you need help finding them, check out our best Lynx locations guide.

The more you level up, you will be able to hunt even larger animals such as bears, and when it happens, you will want to start hunting a few of them. In short, hunt tons of high-level animals, and you will have no problems raising your Tracking and Skinning Trade Skill in New World.