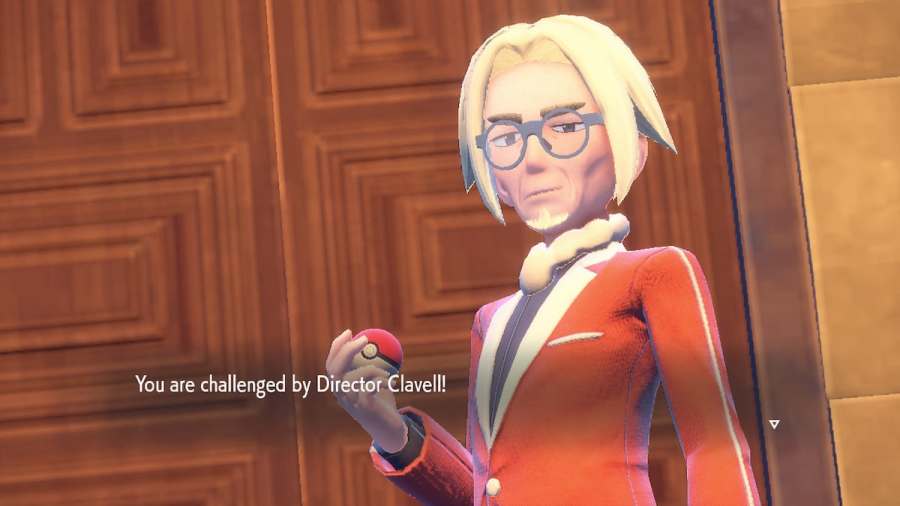 Director Clavell is the second to last fight in Pokémon Scarlet & Violet's Starfall Street storyline. They will have three different teams. Each team has the same first three Pokémon, but will have the other three parts of his team determined by which Starter the player chose at the beginning of the game. It is recommended to have Pokémon leveled up to at least 61 and to have finished the other storylines. This is everything players need to know about the fight with Director Clavell in Pokémon Scarlet & Violet.

How to defeat Director Clavell in Pokémon Scarlet & Violet

Director Clavell will have one of three teams depending on which Starter Pokémon players chose at the beginning of the game. It is recommended to have Pokémon leveled up to at least 61 as it can be a very difficult fight if underleveled. By this point, players should have already completed the last Gym in the Victory Road storyline with the Ice Gym, as the ace for the Gym is level 48. Even the Dragon Titan is suitable to fight at level 55 and could be wrapped up before the end of this storyline. Clavell's team is:

Related: All Held Items and What They Do in Pokémon Scarlet & Violet

Going over the threat of every single Pokémon, Oranguru will use Yawn to make the player's Pokémon fall asleep at the end of the following turn. To avoid this, players can use a Chesto Berry to have them wake up or just heal it off if they feel like wasting a turn. Reflect will halve the damage from Physical moves for 5 turns so it is important for players to take it out quickly or use Special moves instead.

Abomasnow, likewise, will use Aurora Veil to halve the damage of both Physical and Special moves while being able to use Blizzard and Wood Hammer for a lot of damage. Because of its Ability, Snow Warning, it will be Snowing and increase the Defense of Ice Type Pokémon until the Snow ends. It can be taken down with a Special Fire Type move without much trouble and should be dealt with quickly before it raises the defenses of the entire team.

Polteageist can use Will-O-Wisp to Burn the player's Pokémon, halving their Attack Stat as a result. It will try to increase its own Stats with Shell Smash as well, sacrificing its Defense and Special Defense for a raise in Attack, Special Attack, and Speed. When attacking Polteageist with a Physical move, its Ability, Weak Armor, will activate to decrease its Defense by one stage in return for raising its Speed by two stages.

Gyarados's Ability, Intimidate, will also lower the Attack of Pokémon when brought it by one stage and uses all Physical moves itself. It will take four times the amount of damage from Electric moves and can be countered by bringing a Pokémon with high Defense and strong Special moves.

Amoonguss will attempt to either use Spore or Toxic to double the damage of Hex and is extremely tanky. Physical attacks can trigger the effect of its Ability, Effect Spore, and can give the player's Pokémon either the Sleep, Paralysis, or Poison Status Condition.

Houndoom has high Special Attack but is very weak on the defensive side, making it easy to deal with if the player's Pokémon can outspeed it. Without a fast Pokémon, players can depend on a Pokémon with a high Special Defense or a priority move like Mach Punch to take out the Houndoom.

Meowscarada can go down easily with a powerful Bug move but will always land a Critical Hit with Flower Trick. If players have increased their Defense on any of their Pokémon, a Critical Hit will cancel out all of these buffs.

Quaquaval is very strong and will continue to raise its Speed with Aqua Step. It has all Physical moves, making Defense in a Pokémon important for the fight but can be taken out with a strong priority move if necessary.

Skeledirge will continue to raise its Special Attack with Torch Song and can even lower the Special Attack of player's Pokémon with Snarl. It has very high Defense, making Special moves easier to do damage with. After enough Snarl hits though, the damage will start to get lower and lower.

Players should be very careful around any of the Starter Pokémon when they have low HP as that is when their Abilities will trigger. Blaze, Overgrow, and Torrent will all activate when at low HP, increasing that Pokémon's Fire, Grass, and Water moves by 50% respectively.

After the fight, players will be facing Penny. For help with the fight, check out How to beat Leader Team Star Penny in Pokémon Scarlet & Violet on Pro Game Guides.

How to defeat Director Clavell in Pokémon Scarlet & Violet