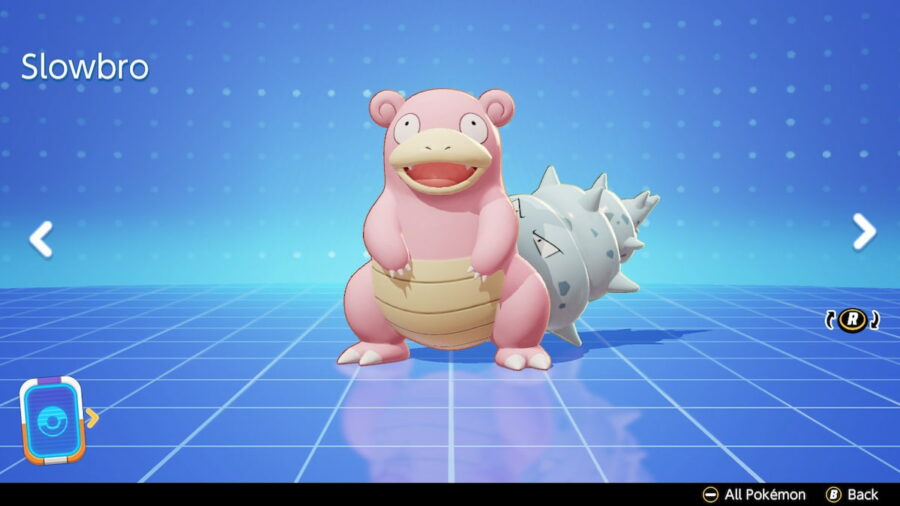 Slowbro is a Defender that uses Special Attacks in Pokemon Unite. The Pokemon is extremely tanky and players can play them to disrupt or debuff opponents with its moveset. Slowbro can be difficult to take down due to its natural ability to heal and its moveset and items can make it nearly unstoppable to knock out. This is how to play Slowbro in Pokemon Unite.

Slowbro is a good disruptor and debuffer in Pokemon Unite, capable of attacking multiple enemies and interrupting scores. Players can play defensively or offensively with Slowbro largely because of its Oblivious Ability. This allows it to store HP to heal over time and decrease enemy Special Defense by 4% up to 20% for five seconds. Slowbro's moveset can cause them to also regain more HP from the ability. Slowbro's Boosted Attacks decrease the Movement Speed of enemies hit by 30% for one second and will stack on top of other movement debuffs.

At level one, Slowbro can learn either Water Gun or Slack Off. Water Gun can be charged to deal varying amounts of damage, has a five second cooldown, and will reduce the target's Movement Speed by 35% for one second. It also restores some of the HP stored by Oblivious. Slack Off will restore 1.5% of Slowbro's max HP every half second for three seconds and doubles all self healing. It has an 11 second cooldown and is best used inside a goal.

At level four, Slowbro will replace Water Gun with either Scald or Surf. Scald is a projectile that will hit three times and Burn any targets in the area. This slows down enemies for half a second while creating a cloud that slows down enemies inside by 30% for three seconds. Enemies will have their Attack reduced by 40% for the same amount of time and heal players for some of their Oblivious HP stored. Surf will disrupt enemies, throw enemies in the air for a short time, and slow them down by 25% for one second. This restores 10% of Slowbro's Oblivious HP every second for three seconds.

At level six, Slowbro will replace Slack Off for either Amnesia or Telekinesis. Amnesia has a cooldown of nine seconds and will give Slowbro 300 Defense for four seconds, restore 22.5% of Oblivious HP every second for four seconds, and will stop as soon as Slowbro takes any action. This also causes Slowbro to become Unstoppable. Telekinesis causes Slowbro to hold an enemy in midair and stop their actions entirely for 2.3 seconds. This will restore 15% of Slowbro's Oblivious HP every second for five seconds. Players can use Telekinesis again when holding an enemy in order to pull their target closer in for an ally like Absol or Tyranitar to take out.

At level nine, Slowbro will learn Slowbeam their Unite Move. This does six hits of damage and will hold an enemy in place for three seconds. This move will go through the Unstoppable condition and render the target immobile until the move ends. Slowbro will gain a Shield from this move and makes Slowbro immune to any hindrances during the duration.

Slowbro can use quite a few Held Items that entirely change its playstyle. While some items will make it more defensive, other items can help make Slowbro an offensive threat. Using a stacking strategy, players can combine Held Items like the Aeos Cookie and combine it with the Battle Item Goal Getter. Other Battle Items can be more versatile and keep Slowbro in the fight for even longer.

Slowbro is extremely multifaceted and its moves are interchangeable because of how powerful they are. There are two main builds that players can focus but can make changes wherever they want to better suit their playstyle.

The combination of Scald and Amnesia gives Slowbro a massive Defense buff since both attacks make it withstand more Physical Attack damage. The upgraded version of Amnesia will also increase Slowbro's Special Defense to make Slowbro even tankier. Scald is powerful in team fights and will keep the more frail Pokemon protected from Attackers. Paired up with a stack build with Aeos Cookie, Score Shield, and either Buddy Barrier or Rocky Helmet along with the Battle Item Goal Getter, Slowbro becomes nearly impossible to take out.

Both Surf and Telekinesis are disruptive moves that Slowbro can use to immobilize enemies either scoring or in team fights. Surf is a powerful crowd control move and can stun multiple enemies for a short duration. Telekinesis is a single target move, but being able to reel in enemies into a group of teammates can be deadly depending on the team composition. A more offensive build can be used with Choice Specs, Rocky Helmet, and Buddy Barrier with X Speed or Slow Smoke as the Battle Item.