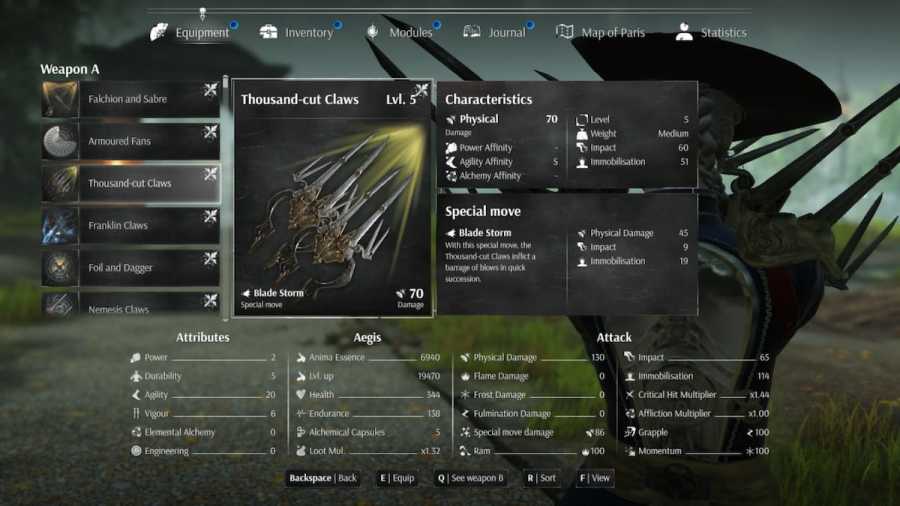 The Dancer is one of four starting classes in Steelrising and focuses on Agility and Immobilization. Increasing vigor to attack and dodge more often pairs well with every class, but it really shines with the Dancer. There are many weapons that scale with Agility, but the best options are those that can Immobilize enemies quickly. This is the best Dancer Build for early, mid, and late game in Steelrising.

The Dancer in Steelrising is one of the four starting classes in the game. Making a good build depends on whether the player wants to rely on pure damage, Immobilization, or pairing up their damage with Alchemy. There are three main weapon types that scale with Agility and have their movesets shared among many other weapons in the game. Critical Hits are dealt against all enemies that are Immobilized, making Vigour extremely important for this playstyle.

Certain weapons are better suited for specific playstyles than others, but there are enough weapons to cover anything that players may want to do.

At the beginning of the game, players will have their Armoured Fans, a weapon with the ability to Shield players from damage. Players will get their hands on a Claw weapon fairly early in the game and a Dual Swords weapon a little after. Using any of these three weapons can be used, but knowing their strengths is important in determining how to play with them. The Nemesis Claws have the fastest Immunization build up of the three weapons and have a parry attached to them. The Falchion and Sabre have a unique spin attached to them that does damage but consumes a lot of Endurance. The most optimal build would be:

Players should increase their Agility as soon as they can for damage and their ability to stun with Immobilization. Durability is important as well, but if players are playing defensively with the Shield or Counterattack skills, then they can focus on Vigour instead.

After players get their hands on better upgrade materials, better weapons, and more modules, builds can start becoming more refined. The use of Flame, Frost, and Fulmination becomes easier as many other weapons can be found whose damage is scaled with both Agility and Alchemy. Frost is preferred, but players may like the damage that comes from Fulmination and Flame. During the time an enemy is frozen, they can still have their Immobilisation built up, making the two synergize well to constantly keep enemies unable to act.

If players keep their previous weapons from before, the Nemesis Claws are the best of the three for this Immobilisation playstyle. Both these and the Thousand Cut Claws are weapons that can comfortably take players to the end of the game with hardly any issue.

There aren't many changes for the build once players reach the end of the game. The new items are few and far between. However, what is found isn't too useful for an Agility focused build. These are the new items players can consider when reaching the end game.

Ideally, players will have found the weapon that they enjoy the most by this point in the game. The Petrification Grenades will build Immobilisation up as well, making them a valuable resource for players who can't get a hit in. Switching things up and playing around with weapons is easy in the game, as all the resources can be bought without any issue.