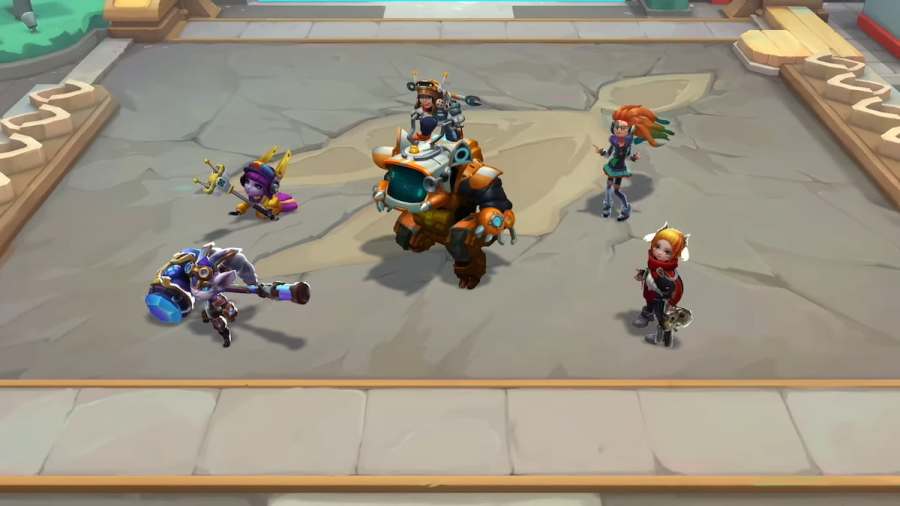 Teamfight Tactics' Set 8 has a lot of traits, augments, items, and synergies that might confuse some players about the best direction to secure a win. Luckily, we've made a list of the top comps for set 8 to help you gain a spot at the top.

These builds are compiled from player data and the win rate percentage. They are the top ten chosen builds for patch 13.1 in January 2023. These builds will help you achieve at least a position in the top four to help you rank up.

The Heart Taliyah build focuses on four carries: Taliyah, Soraka, Ekko, and Syndra. This will give you 5 Star Guardian, 4 Spellslinger, 4 Heart, and 2 A.D.M.I.N. Having Lux and Annie early in the game will benefit you, as Annie is a great frontlane champion. Together with Lux, she will activate the Spellslinger trait to ease you through the first few rounds until you get additional Star Guardians like Rell, Ekko, Soraka, and Taliyah. The focus of this build is the Heart trait. So, if you get a Heart emblem, take it and put it on Lux.

Miss Fortune has quite a variety of builds focused around her but it's usually Anima Squad. This build has 5 Anima Squad, 2 Aegis, 2 Mascots, and 2 Pranksters. If you obtain an Anima Squad emblem, you can use it on Ekko to create a 7-Anima Squad while keeping Alistar as Mascot and Aegis.

Recon is a trait that has been growing in popularity recently. Rightfully so, since it's a very powerful build if you get it right. Recons are all backlane champions. So, having a strong frontlane is key. That's why there are 3 Aegis, 3 Anima Squad, 3 Recon, 3 Star Guardian, and 2 Brawler. Start the game by putting on Aegis, then add Recons in the early game. If you get a Recon emblem, put it on Ekko.

Related: Which units can solo minions in Teamfight Tactics?

Getting Viego in the game guarantees a win, but only if you have the items for him. This build has 6 Ox Force, 3 Aegis, 3 Renegade, and 1 Arsenal. Fielding Sylas, Talon, and Annie will help you get through the early rounds before you get Viego. If you get a Renegade emblem, put it on Aphelios.

Zed is one of the best champions in TFT Set 8. He's a one-man army, regardless of whether you field him on the board with LaserCorps, Duelist, or Hacker. The only condition is that you have the items for him. This build has 6 LaserCorps, 2 Brawler, 2 Duelist, 2 Hacker, and 2 Prankster. The best way to get through the early game is to have duelists on your board. Duelists are OP.

Sureshot is a build that's a bit more difficult to run than the rest. While Sureshot are very powerful, they are all backlane and don't tank damage well. If you have a good frontlane, then this build is a very powerful. This set includes 3 MECHA:Prime, 2 Aegis, 2 Sureshot, 2 Defenders, 2 Mascot, and 1 Ace. There are only 2 Sureshot, and the rest are all frontlane damage tankers. You also have Fiddlesticks, since he has the Threat trait and works well alone. However, if you get a Sureshot emblem, you can add Urgot to your team and give him the emblem. You can have a combination of MECHA:Prime, Aegis, and Defenders during the early game.

Just like the 5th entry, this build also focuses on Sureshot. Specifically, Samira. The build consists of 4 Sureshot, 3 Civilian, 2 Mascot, 2 Ox Force, 1 Threat, and 1 Ace. 4 Sureshot deals a lot of damage. Civilian will help them use their ultimate more quickly, while Mascot will provide additional healing. Zac is a Threat and an excellent frontlane that can buy your Sureshot some time to do more damage. In the early game, you can go with Civilian and Mascot. If you have a Sureshot emblem, put it on one of your tanks.

As we mentioned in the 6th entry, Zed is perfect. And, Duelists are OP. Despite being the third entry on this list, this build is relatively simple to construct. You have 4 Duelist, 3 LaserCorps, 2 Aegis, 2 Brawler, and 2 Hacker. Hacker lets Zed jump to the back to finish off the enemy carry. You can always have more Duelist. Duelist are also good during the early game, since there are plenty of low-cost Duelist. If you get a Duelist emblem, go all Duelist. Put the emblem on a LaserCorps.

Ace is probably the most difficult trait to build in TFT Set 8. It's like Ninja from TFT's older sets. You can have one Ace or all 4. Getting them all is tough. This build has 4 Ace, and 4 Threat. Threats are champions with their abilities, which make them very strong on their own. Using Threat champions to complete this build is a good strategy. There is no way you can lose that game once you have it. During the early game, you should use Threat champions. If you get an Ace emblem, put it on one of your Threat champions.

There are 4 Ace, each of which has its own traits. You could go Miss Fortune Ace or go the Draven route and go the Mecha:PRIME way. This build has 5 Mecha:PRIME, 4 Ace, and 2 Defender. Sett will be your Mecha:PRIME carry as he tanks through damage while your Ace finishes everyone else off. Focus on Mecha:PRIME and Defender during the early game. If you get an Ace emblem, replace Mordekaiser with Fiddlesticks and put it on him.

All of these builds are a roadmap for what builds you can use for a win. You can modify these with additions of your own. With so many augments in Set 8, the TFT world is unpredictable. So, give these a try.

If you aren't sure which augments to use with these builds, check out TFT Augment Tier List (January 2023) here, on Pro Game Guides.