The Teamfight Tactics Rise of the Elements Set 2 Season of the game is now live! There is a bunch of new champions, classes, traits, and origins added and we've got a full list of them all!

It looks like TFT will be changing things up periodically, which means they will be removing certain champions and classes and swapping in new ones. Some champions will stay in the game, but they will likely receive new classes or origins and possibly new abilities!

Update: Cheat sheets updated for the 10.4 patch. We're compiling information about the next set in this Set 3 Champions post. 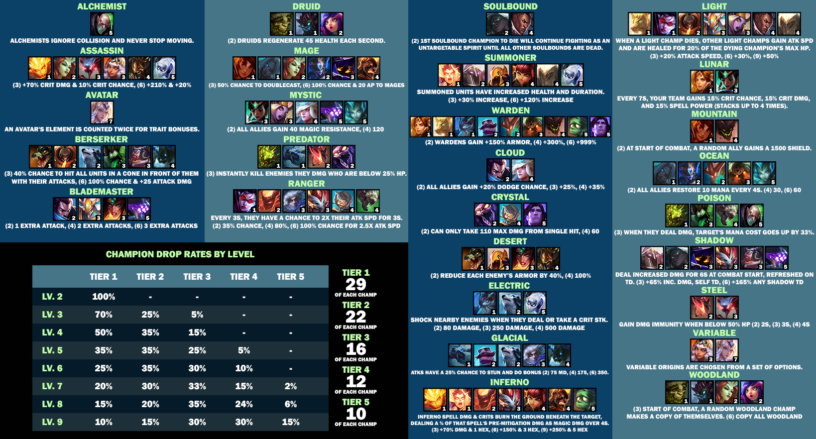 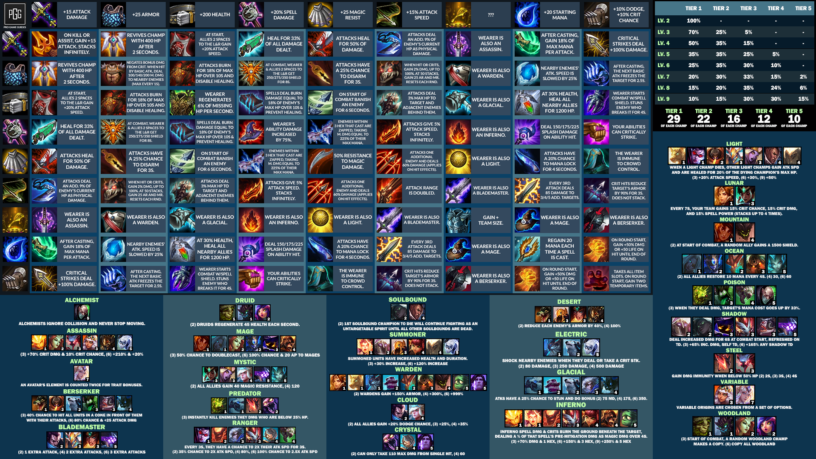 Innate: At the start of combat, Assassins leap to the farthest enemy. Assassins gain bonus Critical Strike Damage and Chance.

An Avatar's Origin Element is counted twice for Trait bonuses.

Innate: At the start of combat, Berserkers leap to the nearest enemy. Berserkers have a 40% chance to hit all units in a cone in front of them with their attacks.

Mages have a chance on cast to instead Doublecast.

Every 3 seconds, Rangers have a chance to double their Attack Speed for 3 seconds.

(2) The first Soulbound unit to die in a round will instead enter the Spirit Realm, becoming untargetable and continuing to fight as long as another Soulbound unit is alive.

Crystal Champions have a maximum amount of damage they can take from a single hit.

Electric champions shock nearby enemies when they deal or receive a critical strike.

Basic Attacks from Glacials have a 25% chance to stun their target for 1.5 seconds and do bonus Magic Damage.

Inferno spell damage burns the ground beneath the target, dealing a percent of that spell's pre-mitigation damage as magic damage over 4 seconds.

(2) At the start of the combat, a random ally receives a 1500 health Stoneshield.

Steel champions gain damage immunity for a few seconds when they are reduced below 50% health.

Changes each game based on the Element that was randomly chosen in that particular game. It can be one of the following: Wind, Mountain, Ocean, or Inferno. This also coincides with the new Elemental Hex mechanic!

(3) At the start of combat, a random Woodland champion makes a copy of themselves.

Here's a full look at all of the champions with their traits and abilities!