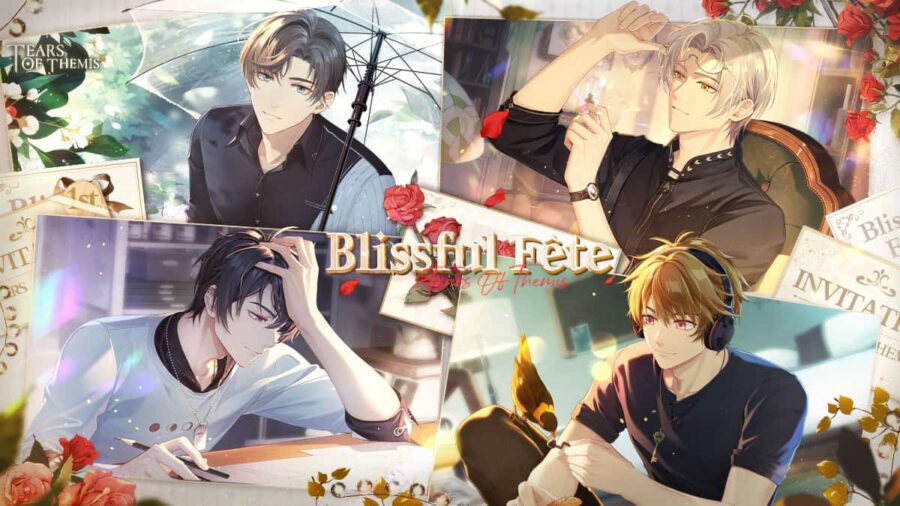 Tears of Themis has kicked off a plethora of Stellis Celebrations leading up to its First Anniversary on July 29. The flagship event, Blissful Fête, starts on July 5 and runs throughout the whole month, bringing in a myriad of limited events that culminate into a major romantic development between Rosa and Luke, Marius, Artem, and Vyn.

Explore Stellis City with him

The Stellis system will kick off in full bloom, allowing players to explore Stellis City in an RPG-like environment. Mirage of Blooming Sword story tasks will take place inside Stellis City, where the NXX Investigation team will band together to solve the mystery of the missing Sky Gladiolus. After the event, the Stellis system will remain open for exploration anytime! Amid the hustle and bustle of city exploration, players can also wind down and enjoy four Festive Games with the male leads or read the newly-released Episode 4 of their Personal Stories.

An exclusive First Anniversary Shadow of Themis rotation called the "Kiss of Fervour" will start on July 11. The following limited SSRs can be drawn on rate-up:

These extra-special SSRs are packaged with customized card stories, exclusive BGMs, 3D keepsakes, and Vow Badges—all contributing to the most romantic environment for a long-awaited confession.

Celebrate one year of Tears of Themis with even more rewards

Tears of Themis will also be introducing a Sign-In Bonus on July 11, where players can log in for 10 free draws in the Shadow of Themis. A new year opens new opportunities—the Returner Gifts event welcomes back old players with Tears of Themis - Limited and a 1st Buy Bonus Reset gives spenders another chance to get bonus rewards from purchasing items from the mall.

Additionally, players who accumulate draws from the Shadow of Themis can get the "Azure Vacation" Anniversary limited Lounge Set with 13 items and "Kiss of Fervour" Time-Limited Vision items, such as x50 Tears of Themis - Limited, x4 Selection Star SSR, and so many more coveted rewards!

Tears of Themis is a detective romance game where players take on the role of a rookie attorney in the fictitious city of Stellis. But darkness lurks behind closed doors, and it's up to the NXX Investigation team to bring justice back to light. Tears of Themis is available on Android and iOS in Simplified Chinese, Traditional Chinese, English, Japanese, and Korean. Visit the official website for more information.

Check out our guide on All answers to the Trial of Love in Tears of Themis – Stellis Anniversary event Festive Games guide to get a perfect score in this Festive Game.

Tears of Themis celebrates its romantic First Anniversary in July