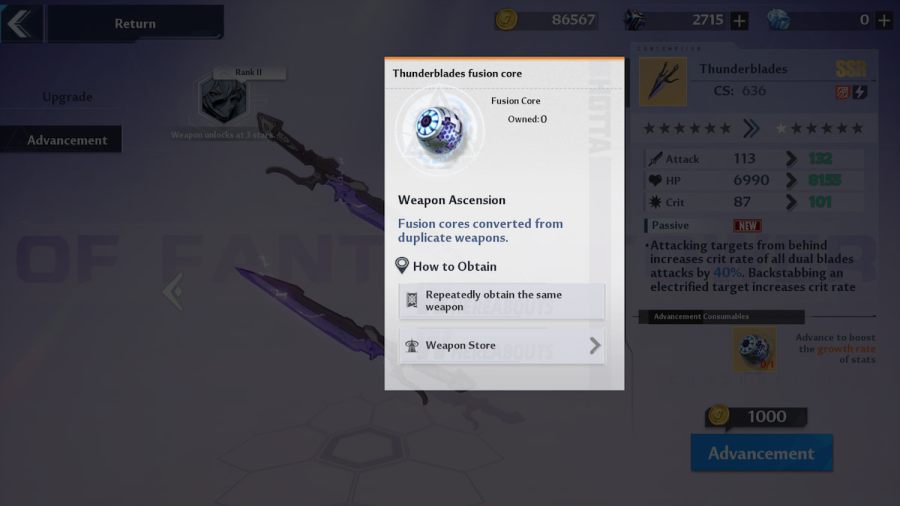 To roam around the world of Aesperia in Tower of Fantasy with relative ease, you need to advance your weapons to make them stronger. Without doing this, you'll find fights take a lot longer than they should. ToF uses a material called Fusion Cores to advance your Simulacrum/weapons, but how do you get Fusion Cores for weapon upgrades in Tower of Fantasy?

To get Fusion Cores for weapon upgrades in Tower of Fantasy, you need to get a duplicate SR/SSR weapon using the Special Orders or by completing a quest. Though the quest method is not as common as using Special Orders.

If you have an SSR, such as Crow or Tsubasa, and want to increase their weapons' star level. You need to get a duplicate Crow or Tsubasa from Special Orders. Once you have obtained a duplicate, it will instantly turn into a Fusion Core for you to use for weapon upgrades.

How to use Fusion Cores in Tower of Fantasy

Related: Can you make the Tower of Fantasy mini-map rotate instead of fixed?

All Fusion Cores are named after the duplicate weapon they were made from. You cannot use another Fusion Core to advance another weapon.

What does obtaining stars for a weapon do in Tower of Fantasy?

Obtaining stars for your weapons do a lot in Tower of Fantasy. Not only does it boost up your stats by a bit, but it also unlocks a passive ability for the weapon, and further Advancement earns you more passive abilities.

Once you get more Fusion Cores to advance this weapon to increase its stars, you'll unlock more passive abilities: