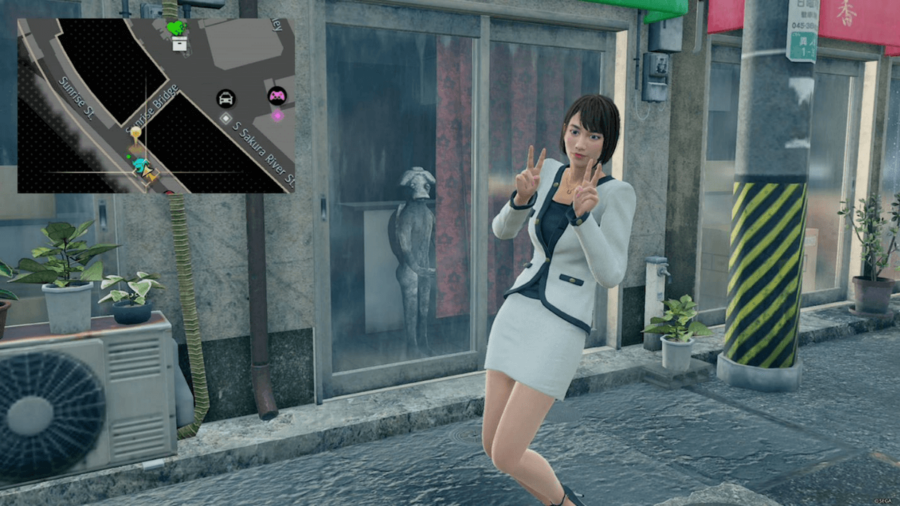 The Yakuza games are no strangers to collectibles, and Easter egg finds. From baseball cards to telephone cards, the games will have you picking up pretty much everything off of the streets of Japan! This time though, it's the statues we are after, so here are all the Kappa locations in Yakuza: Like a Dragon.

This particular statue might be one you remember encountering earlier in the game before being able to take pictures. First, head to the Parking Lot, where you can do the Can Collecting quest; if you look next to it, you will see a statue with a young boy ambling around it.

This is one of the Kappa Statues you can add to your photo collection. However, make sure to talk to Hiro during Chapter 5's Part-Time Hero quest, as it won't recognize it otherwise.

Sunrise Street - Near Ichiban’s Residence (in an Open Window)

You will most likely be quite familiar with where Ichiban lives at this point. Exit Ichiban's place and go Left; start walking down the street until you encounter a building with a Green Awning towards the top of it. Look through the window, and you will see the Kappa just standing there. Get a picture for the 'gram and you're good to go!

This Kappa Statue is a little tricky to find, so we don't blame you if you missed it the first time around! If you have yet to go to the Survive Bar, you will need to unlock it before you can grab the Kappa. However, it is unlocked before a quest, so you can get in there sooner than the questline would dictate.

At a glance, it may appear as though the bar only has one level, but it actually has two! Make your way upstairs and find a single box room that contains a half-open Wardrobe. Peek inside, and you'll find the little Kappa taking a nap right in front of you. Whip out your phone and snap a picture to log it in!

Related: How to unlock Part Time Hero in Yakuza: Like A Dragon

West Jinnai Station - Behind a Wall (in a Glass Elevator)

Admittedly, this Kappa can be a bit annoying to get to! You will need to head into Jinnai Station to find it, but it is fairly easy to get disoriented and lost. The easiest way to find it is to search for Barriers that will stop you from going near the road.

If the barriers have a Box-Like section close by then, you will be able to see the Kappa just chilling in the glass elevator. If you cannot see the square near the barriers, then you have most likely gone East instead of West, so to speak! Grab your picture of the glass-protected Kappa, and that will be another for the collection!

West Carriage Highway - At the Back of the Batting Center

Japan is arguably just as crazy about baseball as America is, and this is more than showcased in the Yakuza games with their minigames! If you go up to the northwest part of the map (upper left), you will find the Batting Center. Go around the back, and you should see a Gold Safe, and to the back, right of it, you will find a sneaky Kappa!

Head towards the bottom of the East of the map in the Red Light District. Before getting to the invisible wall/unreachable zone, you will turn right down a small alleyway. Follow it and you will find a small area that has a section fenced off to the Left. You won't be able to access this, but if you look closely, you will see a good old Kappa sitting on one of the steps.

Get the picture for the achievement and memory, and you can continue to the next one!

Related: How to fast travel in Yakuza: Like A Dragon

Head to Chinatown and venture through it until you get to a Crossroads. It is actually just before you get to the crossroads that you will find a Kappa just chilling in an alcove by some inaccessible shops! Look for the store called Yi Xing Tang on your map, and the Kappa will be in a hidden little spot to the Right of it if you are facing it.

Head over to Hamakita Park and look for the food trucks close to the Dragon Kart Amusement Center. Go to the truck called Hero's Harvest, which sells materials for your weapons and armor upgrades, and you will find a Kappa hanging out next to the owner of the shop.

This Kappa becomes available a little later on in the game after you have done the main story in Chapter 6. During the quest where you are asked to go and stop Captain Takabe, you will encounter a dead end. Look to your right, and you will find a small alcove that leads up.

Walk up there and turn to your Left, then look upwards, and you will see a flat rooftop that you cannot get to. There you will find a Kappa for your camera roll!

Before Chapter 7, there is a section of the game where you are not allowed to go that will actively be made inaccessible. When trying to get in there, the game will have other plans until a later date in Chapter 7.

After meeting the Geomijul Leader, you will finally be able to visit this place. After your interaction with him, head back to the same place but turn Left this time instead of right to head inside, and you will see a Kappa Statue waiting for its picture to be taken.

And with that, you will have found all of the statues! You can now check off the Part-Time Hero quest and get a cool two mil for your troubles! Are you looking for more content? Check out how many chapters there are in Yakuza: Like a Dragon.

How to defeat Mr. Shakedown in Yakuza 0

How to find and unlock all Hostesses in Yakuza 0

How many chapters and substories does Yakuza 0 have?

Where can you sell items in Yakuza 0?