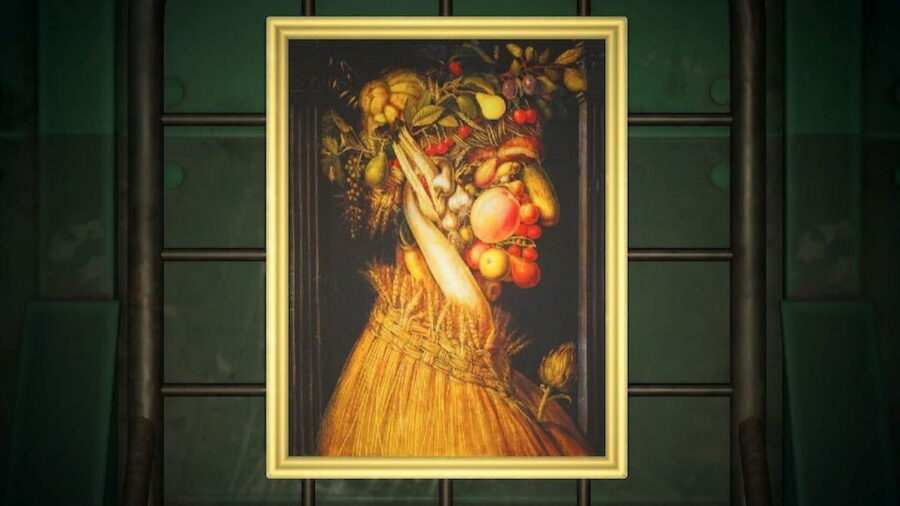 Part of completing the Museum on the island in Animal Crossing: New Horizons is collecting all of the art pieces via Redd. However, this can be difficult to do as Redd will sell both fake and real pieces. We'll go over all of the different paintings and statues, as well as how to tell the real ones from the fakes. If there are no fakes, we'll just go over the real-world name of each piece.

Related: How to Get a Gold HHA Trophy in Animal Crossing: New Horizons

This is the Vitruvian Man by Leonardo Da Vinci. The fake will have coffee cup stains in the upper right corner.

This is Rembrandt's The Night Watch. To tell which one is fake, check the man in the front of the painting. If he has no black hat, it's a fake.

This painting is The Blue Boy by Thomas Gainsborough. The fake will have a full set of straight-cut bangs.

This is A Sunday Afternoon on the Island of La Grande Jatte by Georges Seurat.

This is The Gleaners by Jean-Francois Millet.

This painting is Rooster and Hen with Hydrangeas by Itou Jakuchuu. The fake has purple flowers and the real one has blue.

This is The Great Wave off Kanagawa by Katsushika Hokusai.

The Mona Lisa by Leonardo da Vinci. The fake one will have high arched eyebrows.

The Flowery Painting is Sunflowers by Vincent van Gogh.

This is The Fighting Temeraire by Joseph Mallord William Turner.

This is Beauty Looking Back by Hishikawa Moronobu. The real one has the figure taking up two-thirds of the painting and looks backward. The two fakes include one that is looking forward and another that takes up the full space of the painting.

This painting is Summer by Giuseppe Arcimboldo. To tell if it is the real one, check the chest of the figure. The real one will have a flower poking out of its chest.

This is The Sower by Jean-Francios Millet.

This is Botticelli's version of The Birth of Venus. Players can tell which one is fake by looking behind the woman on the right side of the painting. The real one will have a tree behind her.

The Mysterious Painting is Isle of the Dead by Arnold Bocklin.

This is The Fifer by Edouard Manet.

The Perfect Painting is Apples and Oranges by Paul Cezanne.

This is The Bar at the Foiles-Bergere by Edouard Manet.

This painting is The Milk Maid by Johannes Vermeer. To tell the real from the fake, look at how much milk she is pouring out. In the real one, she is pouring just a dribble out of her pitcher.

This is the Portrait of Ootani Oniji III as Yakko Edobei by Tooshuusai Sharaku. To tell which one is fake, check out the eyebrows. The real one will have his inner eyebrows tilted downward in an angry expression.

The Scenic Painting is Hunters in the Snow by Pieter Bruegel the Elder. To tell the real from the fake, count the hunters. There should be two in the bottom left corner.

This is the Lady with an Ermine by Leonardo da Vinci. The real one will have an all-white ermine in her hands. Any other coloration is fake.

The Sinking Painting is Ophelia by John Everett Millais.

This is Las Meninas by Diego Velázquez. There are more paintings within this painting that players will have to pay attention to. This is a much more subtle difference, with the figure in the upper right painting being the focus. He should be holding back a curtain.

The Twinkling Painting is The Starry Night by Vincent van Gogh.

This is The Clothed Maja by Francisco de Goya.

This is the Wind and Thunder God by Ogata Koorin. Players can tell the real one from the fake by the color of the creature. His skin should be white.

The other half of the Wind and Thunder God. On this side, the creature should be dark green instead of white.

This is the Girl with the Pearl Earring by Vermeer. It'll be easy to identify by simply checking the earring. It should be a circular pearl and no other shape.

This is Liberty Leading the People by Eugene Delacroix.

Related: Where to get a Pro Decorating License in Animal Crossing: New Horizons

This is the Shakouki dogu clay figurine from 1,000-400 BC. To spot the fake, check out the headpiece. He should not have antennae.

The Venus de Milo by Alexandros of Antioch. To tell this statue from the fake, check out the neck area. She should have nothing around her neck.

This is The Thinker by Auguste Rodin.

This is the Statue of David by Michaelangelo. The fake will be carrying a book under his left arm.

This statue is of King Kamehameha I by Thomas Ridgeway Gould.

The Rosetta Stone from 196 BC. Players can easily spot the fake from the real one, as the fake will be bright blue.

This is the Capitoline Wolf from the 11-12th century. Check the mouth to tell if it's fake or not. The fake will have its tongue sticking out.

The Nefertiti Bust. Players can quickly spot the fake as it will be sporting a dangly earring.

This is the Discobolus of Myron from 460-450 BC. The fake is easily spotted as he is sporting a wristwatch.

The Olmec Colossal Head from 900 BC. Players can tell the fake from the real one by looking at his lips. The fake one will be smiling.

This is Houmuwu Ding from 1600-1046 BC. The fake one is easy to see by its strange handle in the center of the lid.

The Winged Victory of Samothracel Nike of Samothrace from 2nd century BC. The fake version is inverted from the real one with the dress draping over the right shoulder instead of the left.

This is a Terracotta Soldier from 210-209 BC. Another easy fake to spot, just check the soldier's hands. The fake will be grasping the sword in the stone.

However, on the other end, when players purchase a fake art piece and try to turn it into Blathers, they will receive a different achievement. This will grant the Faked Out! achievement with the Plausible Fake title and 500 Nook Miles.

For more Animal Crossing content, be sure to check out Animal Crossing: New Horizons Toy Day (Christmas) Event: What to do, Gift Exchange, Rewards on Pro Game Guides.