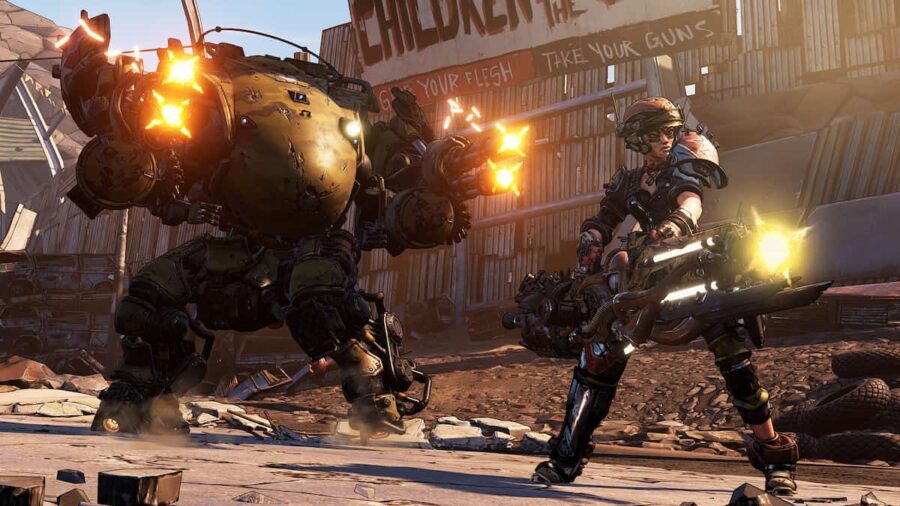 Moze the Gunner is a run-and-gun style character in Borderlands 3. She's specialized in mech warfare and her favorite weapon is a huge mech Iron Bear. If you're up against tough-to-kill enemies, you'll utilize this vehicle to deal huge amounts of damage to your foes with a variety of different weaponry.

To be more effective, you can create different Moze builds by using Bottomless Mags, Demolition Woman, and Shield of Retribution skill trees! With these builds, you'll have more chances against enemies in Borderlands 3.

This Borderlands 3 Moze Builds Guide features a look at some of the top options for the character and class. If you need more help with this game check out Borderlands 3 Best Builds, Borderlands 3 Shift Codes List, and All Typhon Log Locations in Borderlands 3.

What are the best Moze Builds in Borderlands 3?

We're featuring multiple Borderlands 3 Moze builds that you can choose from. They're taking advantage of the different skill trees, in order to be more effective. Check out this page often as we'll be rotating out builds when more powerful options are discovered!

There are a lot of Moze builds out there that utilize grenades, but if you want to trash bosses with guns then End Game Boss Killer Moze Build is the best bet! You must have a Deathless Legendary Artifact for Moze, which lowers your health down to 1, thereby synergizing with the rest of the build.

You will also want to look for a high Weapon Damage class mod to compliment the build. For your gun, you will want to have the Lyuda Sniper Rifle. This is an extremely powerful weapon that fires a ton of bullets very quickly. It also features a huge additional crit bonus which will inflict a ton of damage to enemies.

As for the skills, you'll be going down both the Bottomless Mags and Shield of Retribution trees. Most of the key skills have to do with increasing your Gun Damage when you have high shields or low health. One of those is Armored Infantry which gives you a nice boost of damage when you have a shield active.

What does Desperate Measures skill do?

Further down the Shield of Retribution tree is the key to this build: the Desperate Measures skill. This increases your Gun Damage by up to 50% depending on how low your health is. The health should be at 1 if you've got the Deathless Artifact, so you will have that 50% boost to Gun Damage all of the time.

Going down the Bottomless Mags tree will get us the ability to rarely reload, thus allowing us to continually fire. Some key skills here are Redistribution which regenerates ammo each time you score a critical hit. Scorching RPM's which increase Fire Rate and Critical Hit Damage, and Click Click... will help increase damage as well!

Shield of Retribution - Railgun/Grenade Launcher Moze Build takes skills from all three trees and combines them into one of the more powerful early builds for Moze. We'll utilize the Railgun and the V-35 Grenade Launcher as weapons for the Iron Bear. The Railgun can provide heavy AOE for multiple enemy situations once you have the Capacity Armature augment.

That'll make those times when you get overrun a lot more manageable. On the Grenade Launcher side, we're running the Shaped Charge augment which vastly increases the damage when you land a direct hit.

What does Tenacious Defense skill do in Borderlands 3?

You'll need to go all the way down the tree to get Tenacious Defense. It allows us to restore a portion of the shield immediately once it is popped, plus it gives us a big gun damage buff. Combine this with Force Feedback that instantly begins charging the shield when you score a critical kill.

There's no cooldown on Tenacious Defense, so you can keep having shield pop and get the buff, then regain it quickly after a critical kill. That means we're stacking tons of gun damage if you can trigger this multiple times in a fight!

Torgue-Focused Demolition Woman Moze Build is focused on the Demolition Woman tree and dealing splash damage with Torgue weaponry. To use these weapons switch between regular and sticky-projectile fire modes. Stickies do more damage if a bunch of them detonate on the same target.

The projectiles are explosive, so they will be doing some splash damage, and the Demolition Woman tree is centered around taking advantage of that type of gun. You can take this a step further by upgrading the Matched Set ability that provides a buff to magazine size for using items from the same manufacturer (Torgue).

To further your ability to utilize the splash damage, you'll be running two weapons on Iron Bear that benefit: V-35 Grenade Launcher and Vanquisher Rocket Pods. You need to run the Lock, and Speedload augment on Grenade Launcher for large burst fire and speedier reloading.

How to use Active Tracking skill in Torgue–Focused Moze Build?

The Rocket Pods are upgraded by the Active Tracking augment that makes it fire homing rockets! This will allow you to hold down the fire button and target multiple enemies. Releasing the button will launch a volley of them at those poor souls.

We cap off this skill tree with the Short Fuse passive ability. Anytime you deal gun damage, there will be a chance for a secondary explosion. We're already exploding things all over the place, so adding even more to that will be insane!

Double Salamander Build runs double flamethrowers that deal Incendiary Damage when used. The idea is to increase fuel capacity with these weapons so that you can get in close and douse enemies with double-barrels of flames! The Fuel Economy action skill augment helps us keep pumping out the flames, and it also increases your movement speed, allowing us to catch any enemies that try to get away.

Related: How to Get a Golden Key in Borderlands 3

What does Specialist Bear skill do in Borderlands 3?

You need to go all the way into the Bottomless Mags skill tree. It features a lot of skills that increase the ability to use the salamanders but also increase your ability to keep pumping out gunfire with regular weapons. Doubling up the salamanders means you can take advantage of a significant damage increase from Specialist Bear, which gives Iron Bear +25% damage while equipping two of the same weapons.

When we reach the bottom of three, place a point into the Forge ability. This gives us Ammo Regeneration for weapons which means we're never going to have to reload. But it also means we get unlimited ammo on heavy weapons like a rocket and grenade launchers! It's a pretty powerful ability and will make for some fun gameplay.