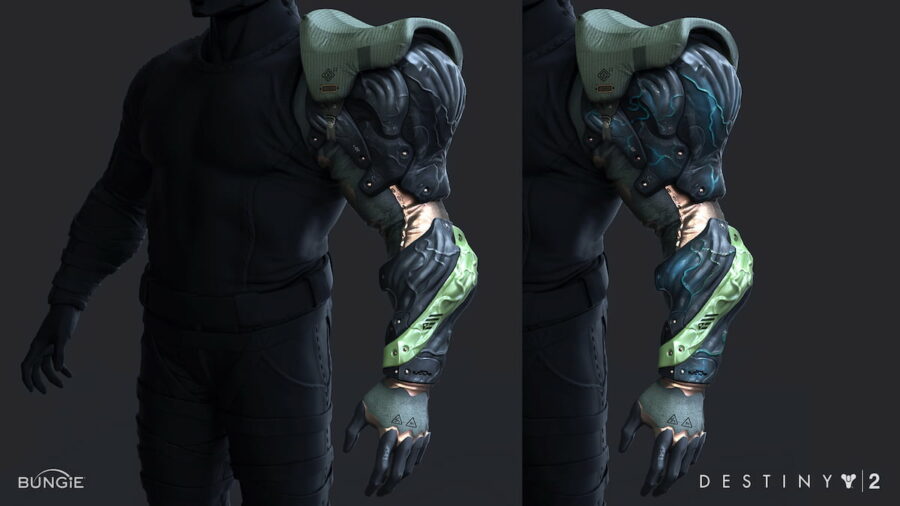 Titans are the tank-style class within Destiny 2, and they have several different exotic armor pieces for players to choose from. In total, there are seven exotic helmets, 11 gauntlets, seven chest pieces, and eight leg pieces. Each of these options offers a different perk with boons to certain Titan playstyles and skill trees.

Resolute - Gain an overshield when activating Fists of Havoc.

Starless Night - Enemies that enter Ward of Dawn are blinded, while allies that pass through gain an overshield. Guarding with Sentinel Shield blinds enemies.

Mask of the Quiet One

Dreaded Visage - Grants ability energy when the player is damaged. When critically wounded, the player regains maximum health on kills.

Vengeance - Highlights the target who dares to damage the player. Track down and destroy them for an overshield.

Kintsugi - Final blows from weapons with a damage type matching the player's subclass energy create a burst of healing around the player. After reviving or being revived, the player gains an aura that provides overshields to them and their allies.

Fury Conductors - Melee hits build energy. Being struck by a melee attack reduces incoming damage and unleashes the energy in a devastating explosion.

This gauntlet set offers three perk options for players to choose from:

The Sect of Insight - Successive precision weapon takedowns will gain a chance to drop an Orb of Power for the player's allies. When the player uses a finisher on an Elite, they will generate Special ammo for the player's fireteam. When used on a boss or miniboss, it will generate Heavy ammo for them instead. Nearby Aeon Cult allies who do not have the Sect of Insight role equipped will also gain a bonus burst of weapon damage for a short time.

Assault Barricade - The player and their allies can shoot through the player's Towering Barricade, which has reduced health and duration.

Glacial Guard - Replaces the player's Barricade ability with a personal overshield. When activating the Barricade, players will create a burst around themselves that slows their combatants. While they have the overshield, they are slowed and the Barricade will not recharge.

Ursine Guard - Move faster while guarding when the Sentinel Shield is active. Guarded damage convert to Super energy once the Super ends.

Burning Fists - Melee kills increase the player's melee damage for a period of time. Additional kills extend the duration and increase the effects.

And Another Thing - Gain an additional grenade charge.

Survival Well - Generates an additional Orb of Power from Supers and a healing pulse when the Barricade is activated.

Cuirass of the Falling Star

Glorious Charge - Greatly increases your Thundercrash impact damage. Gain an overshield that lasts longer the farther the player travels before striking a target.

Overflowing Light - Using an ability (such as grenade, melee, or Barricade) empowers the other two abilities. Empowered means abilities have a faster regeneration, melees, grenades do more damage, and Barricades have more hit points.

Linear Actuators - Increases sprint speed. Sprinting builds up a static charge. After melee-attacking an enemy, that charge will chain damage to nearby enemies.

Jump Jets - Provides additional aerial maneuverability and enables accurate hipfire while the player is in the air during Lift.

Seriously, Watch Out - Grants an overshield when sprinting at full health with Seismic Strike, Hammer Strike, or Shield Bash equipped and charged. Hits with these abilities recharge a portion of the player's melee energy.

Mecha Holster - Reloads stowed Submachine Guns and allows the player to ready them instantly. Improves the player's handling with SMGs and their movement while wielding one.

Beacons of Empowerment - Sun Warrior lasts twice as long. Allies who pass through the Sunspots are granted Sun Warrior for themselves.

The Path of Burning Steps

Firewalker - Solar final blows periodically grant the player an escalating bonus to weapon damage. The player is harder to slow or freeze with Stasis, and when they break out, they take no damage from doing so, creating a burst of Solar energy around themselves.

For more Destiny 2 content, be sure to check out What to do with Forsaken Ciphers in Destiny 2 on Pro Game Guides.