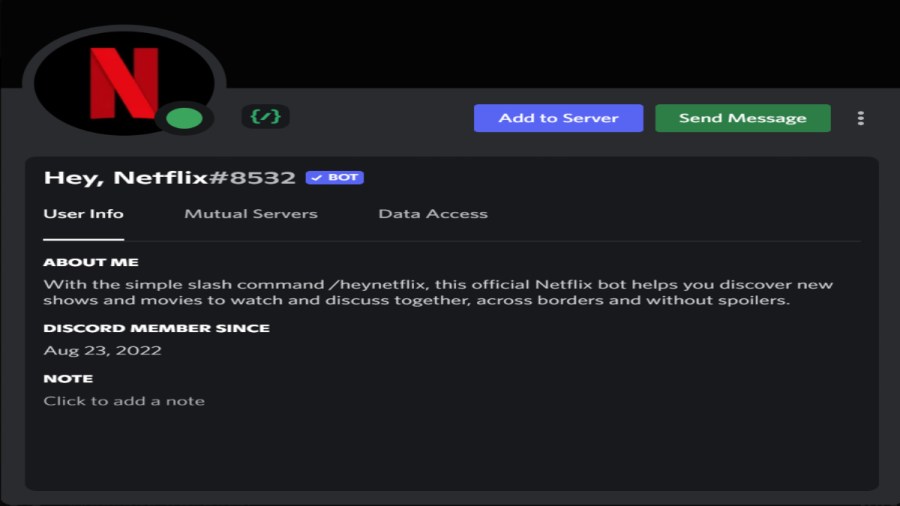 Discord has joined forces with the massive streaming empire Netflix to create the new Hey, Netflix bot. It can be added to any server to give users a new way to enjoy streaming video content together. This official collaboration offers a few unique features but has also left some on the table.

To install the Hey, Netflix bot, simply follow this link. From there, click Select Server, install the bot in any Discord Server, and type /heynetflix to activate its features.

Related: How to strikethrough on Discord

All features of the Netflix Discord bot

The Hey, Netflix bot provides the user with a list of recommended titles from the Netflix service. After being summoned, it asks the user whether they're watching with friends, whether they'd rather watch films or series, and what countries the party occupies. From there, it will provide four titles curated to the choices of the group and the titles available in each country, which the party can vote for.

Once the group has decided upon a title to watch, the bot drops a link to the title on Netflix and opens a new channel for a live discussion. The Hey, Netflix bot does not allow the group to watch the stream together. Users are responsible for their own Netflix accounts and synching up their viewing experience.

Despite the bot's description mentioning viewers watching their chosen titles together, it cannot play videos in the Discord app. This prevents anyone without their own discrete Netflix password from enjoying the material. As Netflix recently discussed cracking down on password sharing, this app must avoid breaking the streaming service's rules.

No, the Hey, Netflix app is totally free. Just go to the link mentioned above and add it to any server. The Hey, Netflix app doesn't have a lot of features, but it might make watching a film with friends a bit easier under the right circumstances.

For more Discord guides, check out How to set up a Pokémon bot in your Discord – Pokétwo bot guide and Bad Network Request on Discord – How To Fix on Pro Game Guides.

Netflix Discord Bot – All features and how to use