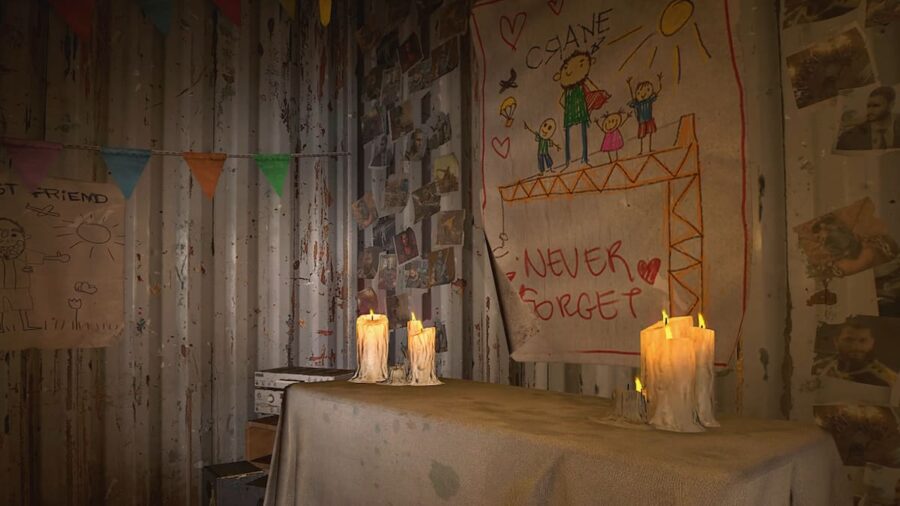 Easter Eggs, hidden references to other games and similar media, are common among all sorts of games. Throughout the whole of Dying Light 2: Stay Human, there are 20 Easter Eggs. We'll go over every one of the easter eggs and where to find them.

Related: All Blueprints in Dying Light 2

Who Do You Voodoo

The Who Do You Voodoo easter egg is is found in the abandoned home player's investigation with Spike during the quest Pilgrim's Path. Aiden will claim that the record sounds familiar. This song is the same one that is played during the opening cutscene of a previous Techland game: Dead Island.

In the same house that players search with Spike during the quest Pilgrim's Path, players can uncover the second main Easter Egg. After standing for a while looking towards the grand piano, Spike will walk over and sit down on the piano bench to play. When he plays the piano, he is playing the theme song of the original Dying Light.

The final easter egg found within the prologue is the Dead Island logo. This can be seen while climbing on the cliffside. Simply look down into the river below.

This is one of the glitchy easter eggs that won't work for everyone, so don't get discouraged if it doesn't pop up. For some players, a dancing zombie can be found in the northern section of Trinity on the soccer field. In order to get him to pop up, players are supposed to kick one of the balls into the goal nine times. Between each goal, players are meant to leave the area. Just remember that after he's done shimmying, he will become aggressive.

Related: How to get the Pan of Destiny in Dying Light 2

While exploring the Peacekeeper's main base, players can find this Zelda easter egg in the hands of a child. It has been recolored to pink, however, the Master Sword's shape is unmistakably there. The child will be flailing the sword around in one of the back corners of the base. This is a nod back to the same Master Sword reference in the previous game.

Players can find the next Nintendo reference in the far southeastern corner of Lower Dam Ayre. In order to reach Mario's famed boots, players will have to make their way up to the suspended shipping container. After picking the lock, players can find several references to the previous game's main character, Kyle Crane.

If players turn on the radio and sit in the chair to listen, eventually a package will appear on the table. This is another easter egg that doesn't always work on a console. If it does work, this package will appear around the line about explosive charges. When Aiden picks them up they will be labeled It's me... Marian! While they are incredibly weak shoes armor-wise, they will grant Aiden triple jumps while wearing them.

Near Culvert Island in the Garrison, players can find this next easter egg. Players will first need to find the flyer asking for a stapler. The letter is signed by Dwight Kurt S. III. This is a little more obscure reference for players who aren't big fans of The Office. It is a reference to the U.S. version of The Office's Dwight K. Schrute as he is constantly dealing with stapler shenanigans.

During the Broadcast mission, Aiden must help rescue a couple of characters who have been attacked by zombies. While it's a pretty standard mission, two of the characters Aiden finds are references to some of the main characters in Resident Evil. Specifically, the reference Leon Kennedy and Chris Redfield. This can be fully confirmed by Leon's comment about Chris "punching through" and the dog tag that can be taken from Chris' body.

Found in the southwestern edge of the Garrison, there is a CyberPunk reference. Paraglide down from the VNC building. After landing on this platform, players can find a hooded figure near the campfire called the Liquidator. He already knows Aiden's name and speaks about Kyle Crane. After speaking with the mysterious Liquidator, he'll leave Aiden a box with the blueprint to a special weapon called Cyber Hands 2177, a reference to CyberPunk's mantis blades.

After the main storyline of Dying Light 2 has been completed, players can find this reference inside the Butcher's base. A talking chicken will be placed behind bars next to a strange poster, referencing alien chickens. He'll have players go on a mission hunting down items across the city. Once players return, he'll try to teleport Aiden with him, but instead will simply disappear, leaving behind a blueprint for the Pan of Destiny.

Back to the Future Hoverboard

In the southeastern end of Newfound Lost Lands, Aiden can connect the power and turn on the radio at the top of the church to find this reference. After investigating the radio, Aiden can hear Tolga and Fatin chattering away, trying to reach the Liquidator. In the message, they mention altering a car to "Dr. Emmett's specifications" and say that they are waiting for him in the B 613 region.

After the message has been played, a holographic hoverboard from Back to the Future can be found in the corner of this room, leaning against the wall. When players go to grab it, however, the board disappears, and players will have to follow a trail of footprints to track it down. It'll be in the trunk of a blue car, and when activated will bring Aiden to a skate obstacle park with a challenge to complete.

Another buggy easter egg can be found atop one of the buildings just below the VNC building. Atop this building is an airdrop and a cable. Players are supposed to grapple down the side of the building with the cable to plug it in on the floors below. Once this skyscraper has power, players will be able to activate the Defense System Panel on the wall beside the double doors.

Activating this will open the double doors into the secret developer room. In the opening hall, posters will line the walls with all of Techland's previous games, along with an exploding zombie. Further inside, players can find a note directly from Techland as a thank you to all of their loyal players.

If players want to stay in the secret dev room for a bit longer, they can discover one last easter egg. Sit at the campfire across from the Techland poster on the wall. While waiting here, teddy bears will begin spawning in under the poster. Eventually, the poster will change to Techland's earlier logo and a blueprint for the Left Finger of gloVa will appear.

This weapon will cause Aiden's left pointer finger to act as a gun. Shoot down zombies with unlimited ammo with some fiery explosions. As such, this is the only gun available to players within the entire game, so enjoy!

For more Dying Light 2 content, be sure to check out Dying Light 2 – How to find the hoverboard & complete the secret parkour challenge on Pro Game Guides.