We're taking a look at all of the Brutus Challenges and how-to complete both week 1 and 2 them in this guide! In Fortnite Chapter 2: Season 2, Challenges are a bit different in that you get a whole bunch of them to complete each week. If you complete at least 18 of these Brutus' Briefing Challenges you will get the choice to obtain the Ghost or Shadow style for the Brutus skin! Once you've selected your choice, you will not be able to obtain the other style.

You are rewarded 40,000 XP for completing each one of these challenges.

We're compiling a ton of information about this battle pass in our Season 2 Guide!

Here's a look at all of the week 1 challenges in cheat sheet form! Credit to SquatingDog for the creation of it. 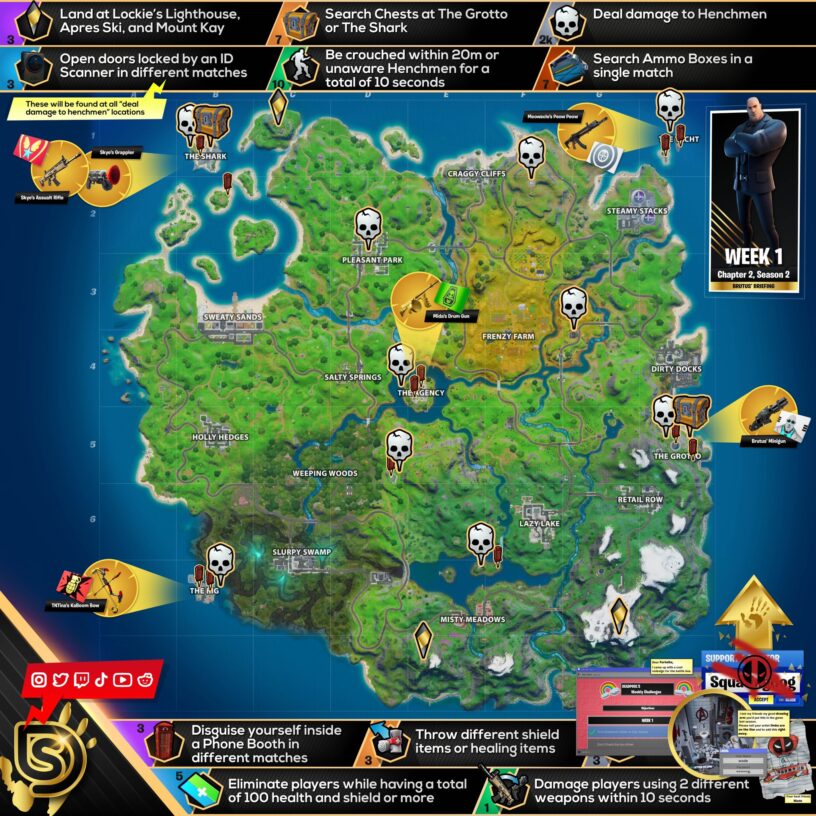 Here's a look at all of the week 2 challenges in cheat sheet form! Credit to SquatingDog for the creation of it. 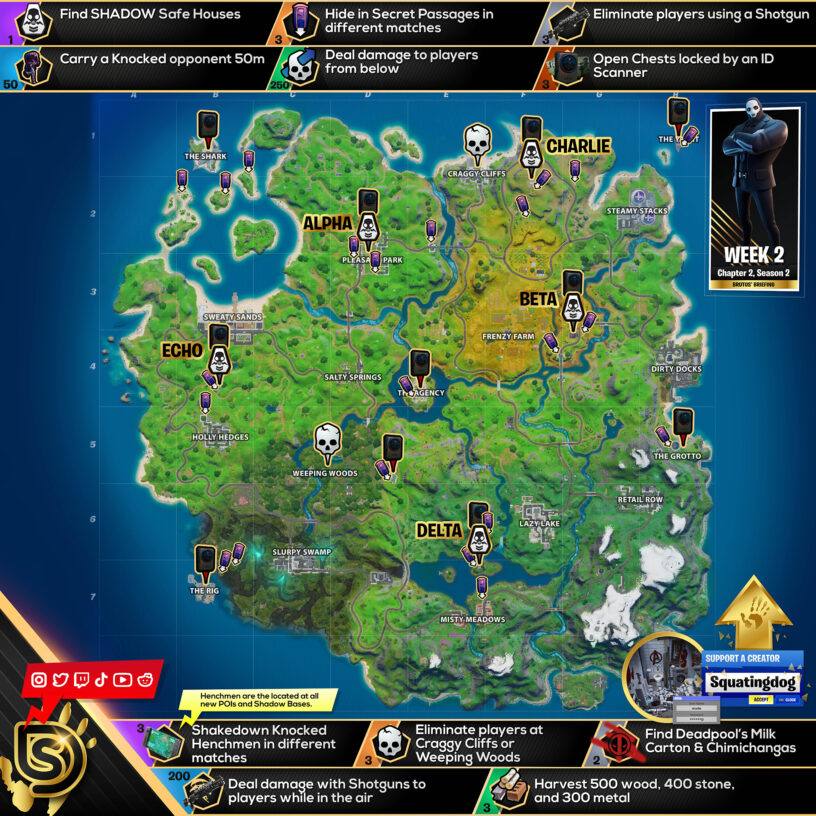 Once you've completed 18 of Brutus' Briefing Challenges you will be able to pick ONE of the following styles for the Brutus skin. As far as we know, you won't be able to get the other one so make sure you choose wisely.

It appears that there will be two weeks of challenges for each of the skins that are contain in the Battle Pass! It's important to note that a lot of the challenges that have to do with Henchmen & ID Scanners will NOT show up in Team Rumble. So, you're going to have to go into regular matches to complete those unfortunately.

I'm pretty sure all of these locations were around last season, so none of these should be too big of a surprise for you. You can likely do Apres Ski and Mount Kay together, but Lockie's Lighthouse would be a good one to save for a separate game. 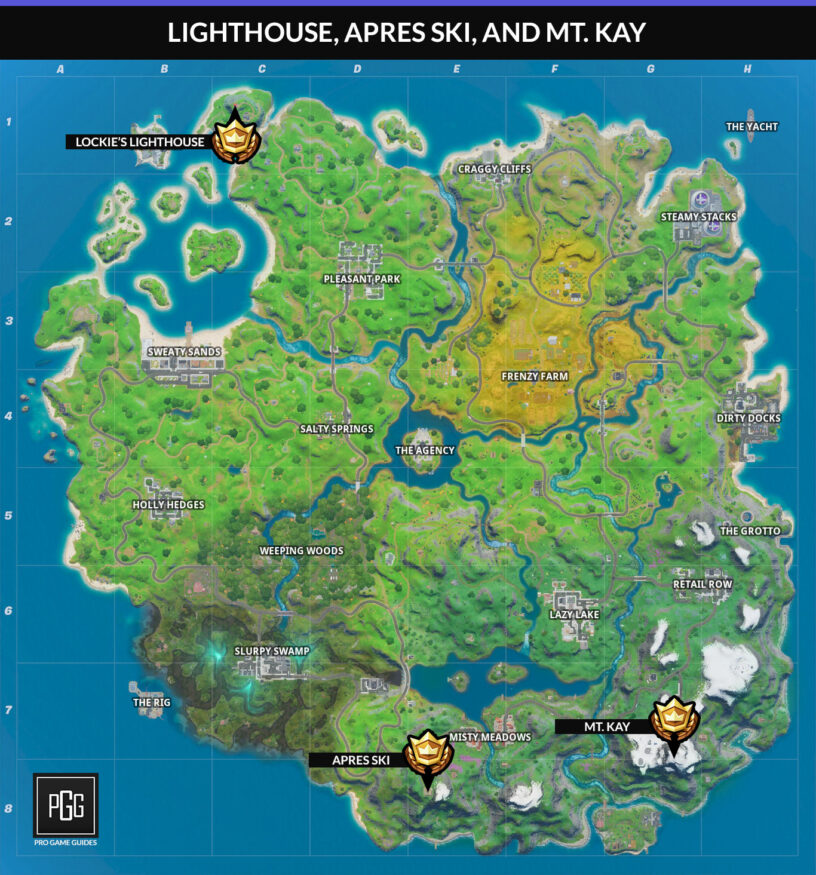 Search Chests at The Grotto or The Shark (7)

Both of these areas are going to be pretty popping, so I'd do this in Team Rumble where you can likely get a location with not too many people at it. Whichever spot is further down the line of the bus would be the better option.

You can find Henchmen at The Shark, The Yacht, The Grotto, The Agency, and The Rig. These are new NPCs that can be fought with at these locations because they feature quite a bit of loot to be found and are part of the lore of the season. You'll also find boss NPCs here and turrets, so make sure to grab weapons quickly or you'll be overrun!

Open doors locked by an ID Scanner in different matches (3)

At the same locations as Henchmen (The Shark, The Yacht, The Grotto, The Agency, and The Rig) you'll find scanners near doors that require you to scan yourself. You can do two things to open these up. One, is to find a Phone Booth and put on a Henchmen Disguise. Once you have that on, you can go up to the door and scan yourself and it will unlock it. The second way to do it is to knockdown a Henchmen and pick them up and bring them to the scanner! This way you use their body to get through the door.

Head to one of the new locations (The Shark, The Yacht, The Grotto, The Agency, and The Rig) and look for a Henchmen. If you crouch down, you can sneak up on them and then you'll just want to wait it out.

Pretty simple one, I'd do this in Team Rumble where you can have access to named areas all by yourself.

Disguise yourself inside a Phone Booth in different matches (3)

You will find Phone Booths at all of the new locations (The Shark, The Yacht, The Grotto, The Agency, and The Rig), and you can also find a couple in other places on the map (refer to the cheat sheet).

You can now throw consumables! This could be helpful to get some timely healing to a teammate, or you could toss it to an enemy to insult them. To throw a consumable, you will need to use your aim button while selecting the item. Hold that and then hit your fire button to throw it!

Get eliminations while having 100 health and shield or more! This shouldn't be too difficult if you get the jump on someone. You can also do this in Team Rumble where it's a lot easier to just get eliminations from far away.

This is a pretty common scenario when eliminating someone. You will likely want to do a shotgun to SMG switch if you're close up. You can also just go assault rifle into shotgun, but the choice is yours.

There's quite a few Safe Houses scattered around, but only specifically marked SHADOW ones will count towards this challenge. 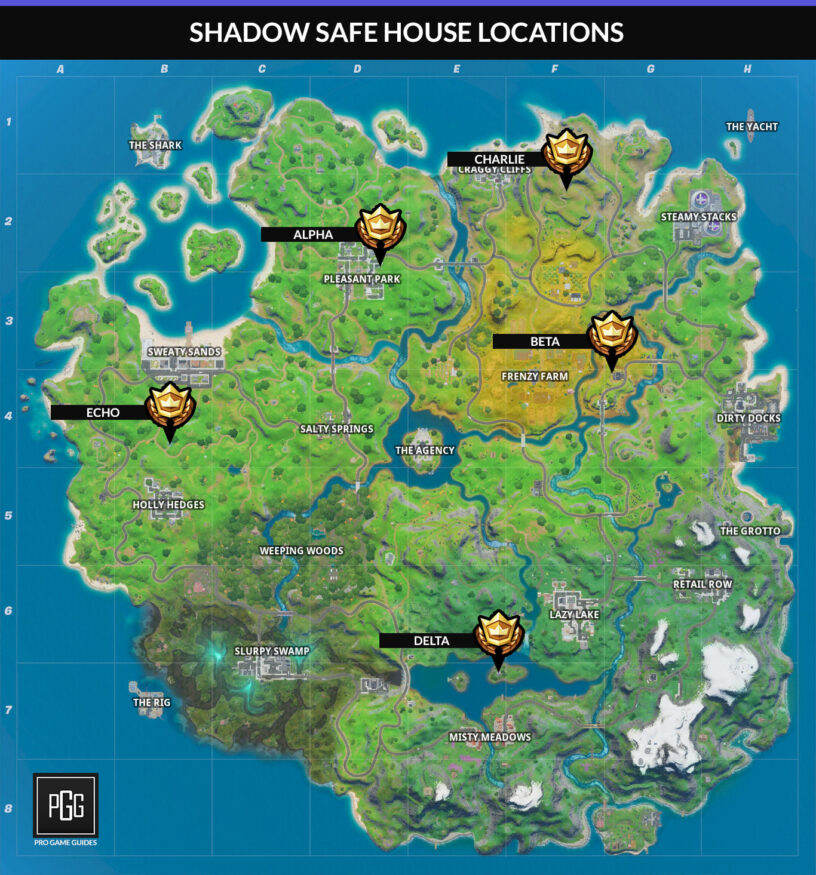 Alpha, Beta, and Charlie require you to enter a nearby Porta-Potty or a Dumpster to get into them. You can't get into them any other way. For Echo and Delta, you just need to get inside the building that is marked on the map above.

A secret passage is basically any Porta-Potty or Dumpster that teleports you anywhere. You'll find these all over the place, but here's some exact locations with the location they will bring you to: 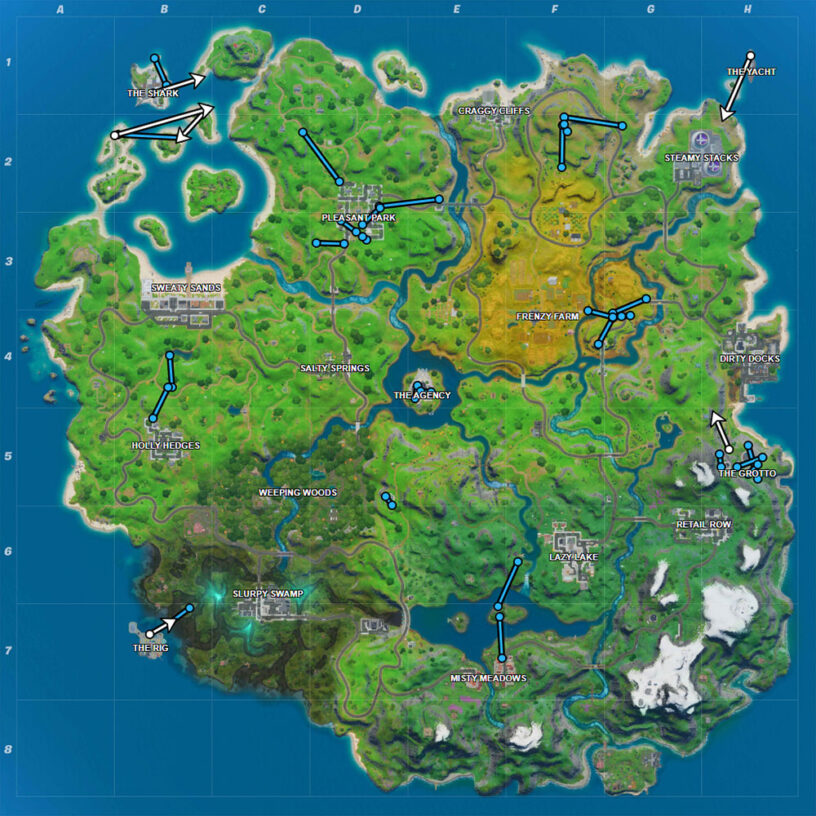 Credit to LootLake.info for the map!

Get a shotgun and eliminate some players! Should be a pretty easy one, you've likely been using shotguns for a while now.

Head into a squad or duo match and knockdown someone. You can then pick them up and run around for a while to complete the challenge. You don't need to do it all in one enemy, each meter you move while carrying an opponent will add up.

Deal damage to players from below (250)

You just need to deal damage to players that are above you. I'd head into Team Rumble for this if you want to complete it specifically, but you will likely just earn this one while playing the game normally.

All of the following locations have ID Scanner Chests that can be opened. You will need to either enter a Phone Booth and get a disguise, or you will need to knockdown a Henchman and carry them over to the chest. If you want to locate one of these chests, then you can knockdown a Henchman and shake them down. This will put icons on your screen, look for the one that looks like a chest! 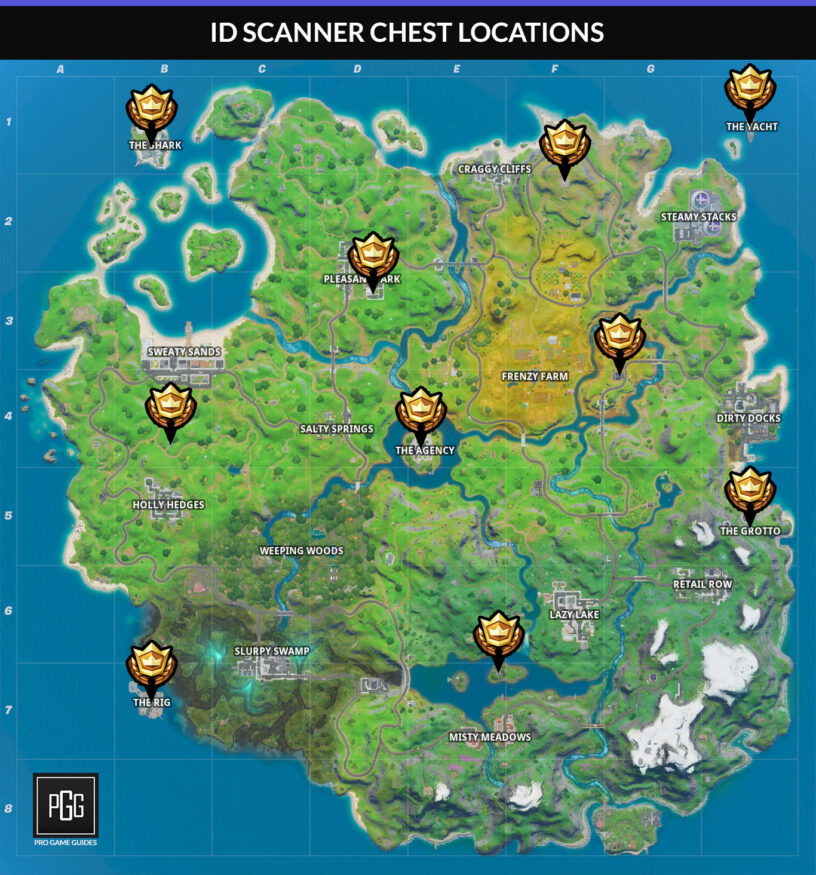 You can probably complete this challenge while doing the ID Scanner chest one. All of the locations with those chests will have Henchmen at them. So, just go to those areas and knock them down and use the shakedown option on them!

Weeping Woods isn't going to be that popular of an area, but if the bus path is directly over it then you could maybe find some action. I'd likely just try Craggy Cliffs because it's a bit more open, and you don't have to venture through a forest to find people.

Deal damage with Shotguns to players while in the air (200)

It's time to do some fancy jumping shotgun shots to complete this challenge. This is another easy Team Rumble option, you can mess around in that mode without losing all of your loot if you get clapped.

As far as I can tell, it doesn't seem like you need to do this in one game. Even if you did have to do it in one game, you could easily jump into Team Rumble and harvest all you want without worrying about getting eliminated.

Once you complete 18 of these challenges, you will be given a challenge you need to complete that will determine which of the styles you want!

Steal Security Plans From The Rig, Yacht or Shark and Deliver them to Shadow or Ghost

You can get the plans from multiple areas, but grabbing them from The Yacht is one of the easier options because, it's in the bottom of the ship and near where you have to turn in the plans. You can then take it over to Steamy Stacks and either put it in the GHOST mailbox or the SHADOW mailbox. Whichever you choose you will be given the version of Brutus that represents that faction.

To find them on The Yacht, enter the bottom floor of the ship and look for the following computer/networking piece of furniture: 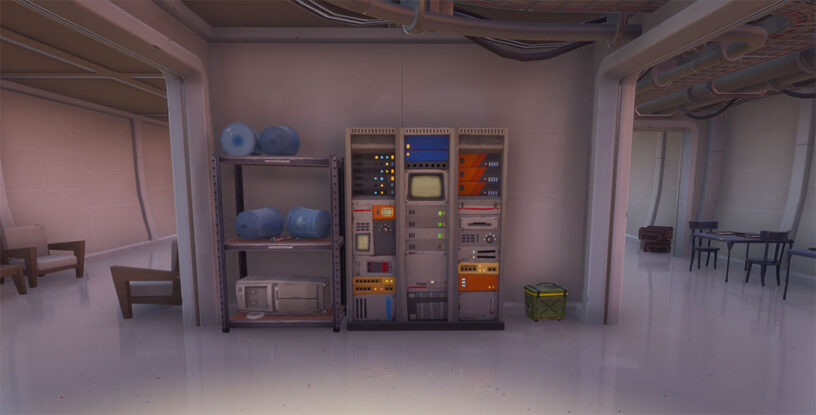 If you've completed the 18 challenges you should be able to interact with it and steal the security plans.

This can be done in Team Rumble, so that's the far better option. This is because you need to get the plans and add them to the mailbox in the same match. Head over to Steamy Stacks to find the locations you will need to turn in the plans. The SHADOW mailbox is dark gray, and the GHOST mailbox is white!