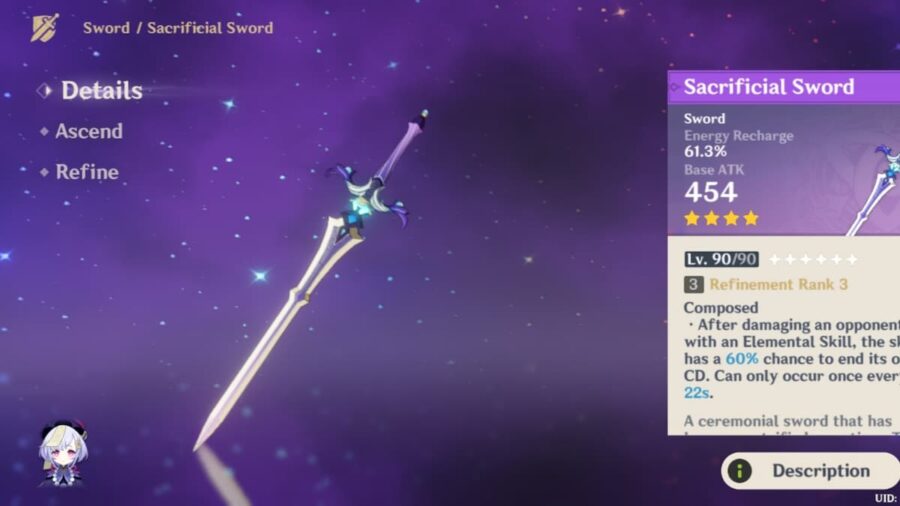 One of the things that makes Genshin Impact's weapon system unique is the skills each comes with. Frequently, these skills will make a weapon of lower rarity a much more valuable option than other weapons that appear to be better. The Sacrificial Sword is a great example of this.

Who should use the Sacrificial Sword in Genshin Impact?

Even with a lower base attack than most other four-star swords, it's still the best slot weapon for Xingqiu. Its ability to frequently reset his long elemental skill cooldown helps him become a better battery and sub-DPS. It also provides Energy Recharge to fill his Elemental Burst gauge quicker and boost his burst damage when combined with the Emblem of Severed Fate artifact set. With the Ocean-hued Clam artifact set, this can also be a good weapon for Qiqi, though the Skyward Blade would be better. You could also use the Sacrificial Sword on Jean, particularly if you don't have a better five-star weapon, but it won't give you as much benefit as letting the first two characters wield it.

How to get the Sacrificial Sword in Genshin Impact

The only way to obtain this weapon is from the gacha pool, though you can receive it from any of the three routine banners. It has a standard 6.0% chance to be pulled from Weapon Event Wish and will occasionally have an increased drop rate periodically. There is a 5.1% chance of obtaining this weapon from the Standard and Character Event Wish banners.

Need to find a different weapon for Jean? You can read How does the Sunfire Jean Reaction work in Genshin Impact and How to get the Primordial Jade Cutter in Genshin Impact to find out more here at Pro Game Guides.

Genshin Impact Sacrificial Sword – best characters, stats, and how to get it