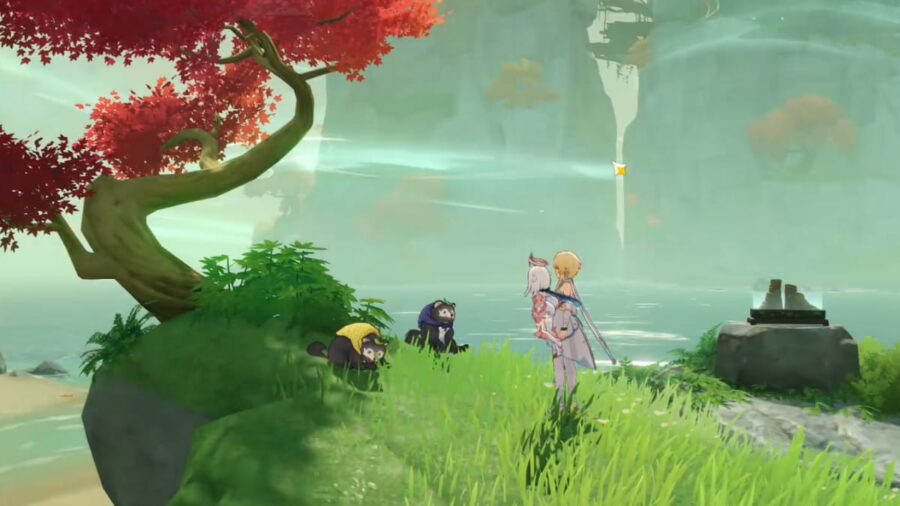 The Bake-Danuku Wanderlust is a limited-time World Quest that can only be accepted from the Golden Apple Archipelago during Genshin Impact's Summertime Odyssey event, which runs from July 15, 2022, to August 24, 2022. In the Inazuma-themed Pudding Isle, you'll meet a Bake-Danuki named Mamesuke who's looking for their friend, Shibasuke.

To unlock this World Quest, you first need to complete all three parts of Kazuha's Mirage, which is tied to an Event Quest of the same name:

Once all three parts are done, you'll unlock the Rearrange Bonsai function in Kazuha's Island northwest of the Pudding Isle. Using this function, change the topography of the island to Inazuma by selecting the following: Hoverlight Rocks: Left and Hoverlight Rocks: Right. Click Confirm and follow the instructions below to initiate the World Quest.

After rearranging Bonsai, head to the location circled in the image above in Pudding Isle. You'll find a Bake-Danuki named Mamesuke with a blue exclamation mark over his head. Speak to Mamesuke to initiate the World Quest.

You'll be asked to use Elemental Sight to look for clues. You can simply climb the mountain behind Mamesuke and Investigate the suspicious-looking log. Once that's done, glide back down and speak to Mamesuke to report your findings.

Next, head back to Kazuha's island to Rearrange Bonsai again. You need to turn Pudding Isle into a Monstadt-themed area using this combination: Leisurely Rocks: Left and Leisurely Rocks: Right. Don't forget to click Confirm to save the changes! After that, follow the quest marker to the mountain in Pudding Isle. Defeat all the Hilichurls and interact with the cage to free the Bake-Danuki Shibasuke. After your conversation with them, head to Kazuha's island again to reunite the two friends.

Now, they want to explore the Monstadt-themed island a bit more, so follow the quest marker back to the mountain in Pudding Isle and carefully glide down. Make sure to land within the Anemo barrier to reach the Sunsettias on the ground. After some more dialogue, follow the quest marker to the nearby Flaming Flower and defeat the Pyro Slimes that appear.

Then, you need to head back to Kazuha's island and Rearrange Bonsai once again. This time, create a Liyue-themed island with this combination: Unyielding Rocks: Left and Unyielding Rocks: Right. Like before, follow the quest marker to meet up with the two Bake-Danuki on the mountain in Pudding Isle. For this next segment, you need to bring out a character that can activate Pressure Plates, such as Geo Traveler.

Related: How to use the Gaze of the Deep in Genshin Impact – Fischl’s Immernachtreich Apokalypse Mirage

To solve this puzzle, place a Geo Construct on one Pressure Plate, then have your character stand on the other Pressure Plate. These are small Plates, so even Mona and Itto's Elemental Skill summons will work. After solving the puzzle, you can claim a Common Chest. Your next stop is the bottom of the mountain. Follow the quest marker and defeat the Ruin Guard to complete this segment of the World Quest.

You can only proceed to the next part after completing Like Rhyme and Song, the Summer Reverie, which is the sixth and final Event Story Quest in the Golden Apple Archipelago. Once that's done, head back to Kazuha's Island to engage with the two Bake-Danuki. Then, head to Windrise in Monstadt and approach the glowing spot to say goodbye to the two. You'll be rewarded with 40 Primogems and some Hero's Wits for your effort.

Check out our guide on How to solve the Electro, Anemo, and Geo Monument puzzles in Pudding Isle – Genshin Impact Summertime Odyssey event to get more rewards from Pudding Isle.