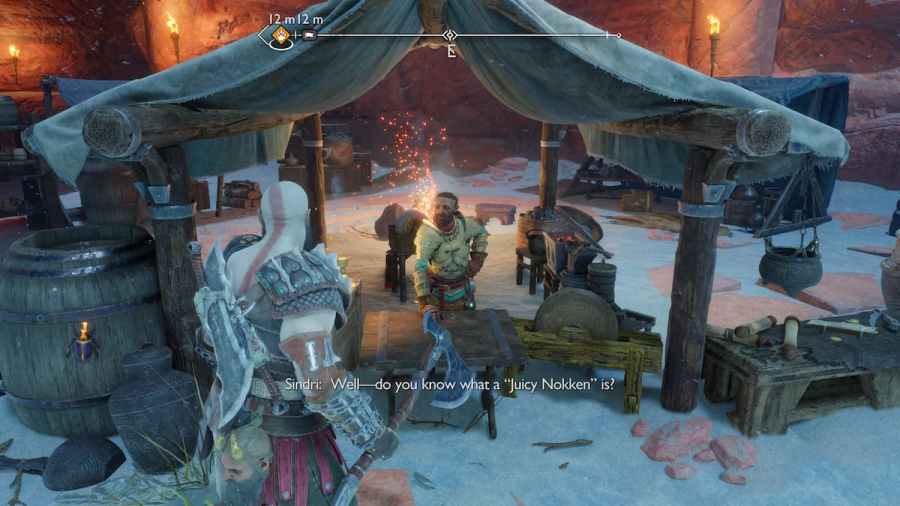 God of War Ragnarök isn't just full of mindless violence. There are many moments when we see Kratos attempt to be the best father he can be to his son, Atreus. In the Barrens of Alfheim, you can talk to Sindri at his smithy. He'll make a comment that his brother, Brok, was banned from Alfheim. When Atreus asks why, Sindri mentions a 'Juicy Nokken' before being quickly cut off by Kratos. Here's some context to help you understand what a 'Juicy Nokken' might be.

What is a 'Juicy Nokken' in God of War Ragnarök?

The game will not explicitly tell you the answer, but we know the reboot series of God of War leans heavily into Norse mythology due to its setting. In Norse mythology, a Nokken is similar to a Nix or Nixie in other folklore. It's a shape-shifting water spirit that could be malevolent, though sometimes not. It would lure women and children to water with songs on an instrument, usually a violin. If it were malicious, the creature would drown them. In this case, the most important thing to know about a Nokken is that it was frequently described as naked in a human form.

Given the mythological context, the fact that Kratos thought Brok's 'Juicy Nokken' was not a suitable topic for Atreus ears and that it got Brok banned from Alfheim, we can only conclude that Brok's 'Juicy Nokken' must be one of the most offensive things seen in that realm. Take our conclusion for what it's worth.

God of War Ragnarök – What is a ‘Juicy Nokken’?