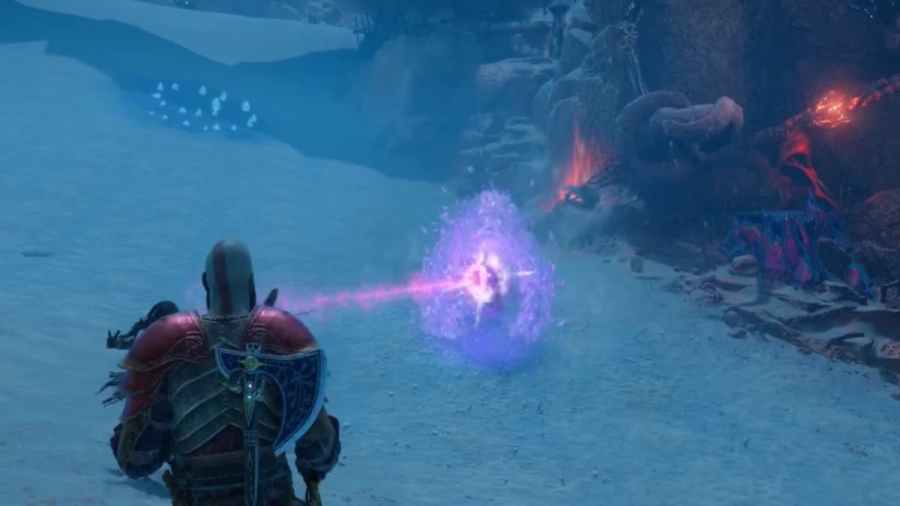 How to defeat the Frost Phantom in God of War Ragnarok

To defeat the Frost Phantom in The Forbidden Sands, you must first keep attacking it to raise the stun bar for it to disappear. Then you need to locate the three Purple Totems. Most of these are out of reach, so you need to rely on your Leviathan Axe throws to damage them. You'll probably only manage to destroy one at a time, but two is manageable if you are fast and lucky. After a time, the Frost Phantom will appear, and you must repeat the process a few times. Once all three are gone, you must damage the Phantom a little to prompt the R3 to let Kratos finish it.

You can find the first pillar hidden on a cliff near where you first find the Forst Phantom shown in the image below:

The second Purple Totem is located on the tower to the left, where the Frost Phantom spawns. You can climb up there, but throwing the axe is faster.

The third Purple Totem is located to the left of the tower in the image above and hidden behind a rock.

You can defeat the second Frost Phantom you meet in Midgard by using the same steps as the one in The Forbidden Sands location. In short, stun them until they disappear, and you can destroy two purple pillars in time to defeat them. Luckily both pillars during the second Frost phantom fight are not hidden away like the previous fight, so you will have no trouble finding both and destroying them.

How to beat the Frost Phantom in God of War Ragnarok