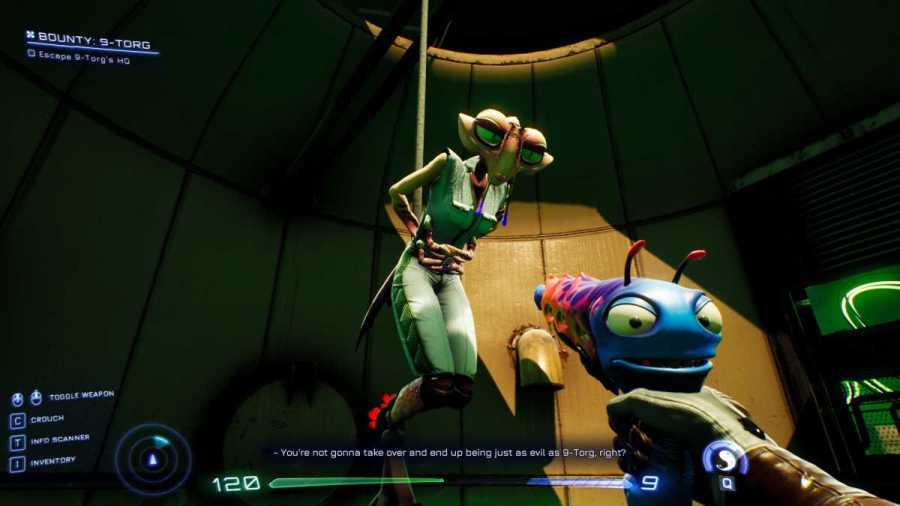 5-Torg is a secret boss that you can fight in High on Life. Just before battling her clone, 9-Torg, you'll find the two of them arguing with one another, with 5-Torg being tied up. After this, the fight with 9-Torg will begin. After defeating her, you will be asked to remove her mandible to take back to Gene as proof of her defeat. This will end the mission, meaning that you'll need to leave the area and move on. At this point, however, 5-Torg will be brought down from the area above you. She's tied up and unable to move on her own. So, how do you beat 5-Torg in High on Life?

How do you beat 5-Torg in High on Life?

To beat 5-Torg in High on Life, you only need to interact with 5-Torg by pressing the E button on your keyboard, prompting a short conversation between her and Kenny. During the conversation, Kenny asks if 5-Torg will become evil like her clone, prompting a rather suspicious interaction.

If you attack 5-Torg with either Kenny or Knifey, you'll immediately see a health bar at the top of the screen. Just continue doing this until it's been depleted, and you'll have defeated 5-Torg. Kenny will immediately commend you for defeating a secret boss because it was a secret. You can leave the area and return to Gene to complete the bounty.

For more High on Life, check out How to beat 9-Torg in High on Life only on Pro Game Guides.

Can you beat 5-Torg in High on Life?