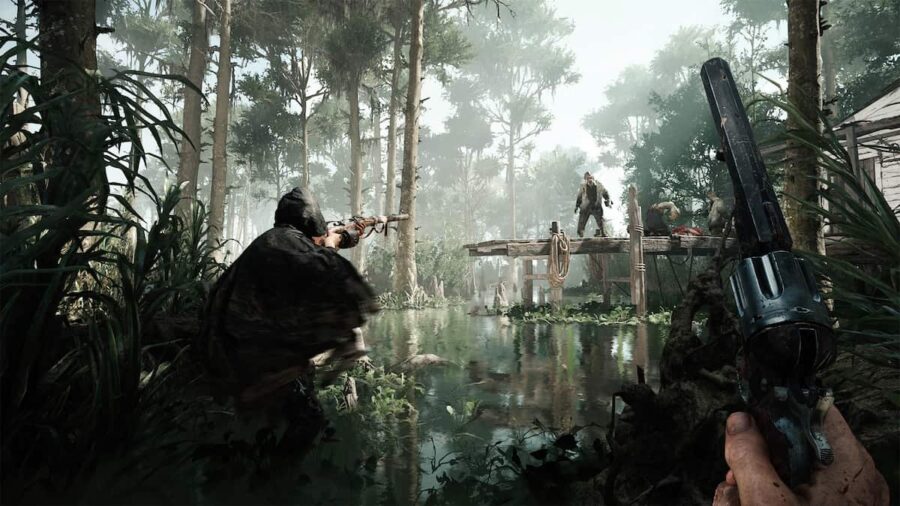 Hunt: Showdown can be an intimidating game to learn, especially due to the game's PvP nature. Even players experienced in the FPS realm can be thrown for a loop by Hunt: Showdown's unique mechanics. To any new players out there, don't fear. The game may be difficult to initially learn, but you'll be winning gunfights and extracting bounties in no time. Buckle up, keep your finger off the crouch button, and come learn some of the best tips for new players in Hunt: Showdown.

Tips and Tricks for Beginners in Hunt Showdown

During this stage of learning, don't hesitate to try all sorts of guns. Are you interested in a shotgun but worry about long-range battles? Try it once. Have you never used the combat axe but are curious about how it feels to attack with it? Go for it—no questions asked. In your early days in Hunt: Showdown, Hunt Dollars are far from scarce. There will be several opportunities to earn money through Trials and simply leveling up. Never deny your curiosity in this learning stage; you might just discover your new favorite weapon.

Sound traps are an integral mechanic of Hunt: Showdown and create blaring noise when alerted. These sound traps come in the form of ducks that quack, horses that neigh, and crows that squawk and fly upward. It is not advisable to create excessive noise, as that shows players exactly where you are. However, accidentally activating a sound trap isn't the end of the world.

If you are new to the game, you will probably be pitted against teams who are also new to the game. At this lower MMR, players rarely use sound information to pinpoint your exact location, so new players shouldn't stress over accidentally alerting a pack of dogs. If you do end up generating a ton of noise, simply prepare to fight other players drawn to the noise.

Participating in fights is arguably the scariest part of learning Hunt: Showdown. It can be intimidating to face off against players who seem like they know what they're doing. However, it is crucial to embrace these fights and learn how to navigate them. The habits you develop now will remain with you as you continue to learn the game. If you shy away from fights now, you will continue to avoid gunfire to the point where you are afraid to enter objective rooms and any contested areas.

Taking part in fights helps teach you the game in a way no guide ever could. Gunfights grant you firsthand experience in knowing when to take cover and when to push. Don't be afraid to fight other players; you have nothing to lose in these early stages.

4. Pay Attention to Where Sounds Come From

Learning to pinpoint the origin of sounds is crucial in finding other players. If you are about to push into Blanchett Graves but hear gunfire that sounds close, it can be tempting to hide and stop the push. However, if you are an amateur at estimating the location of noises, gunfire often sounds closer than it actually is. While you may have thought the gunfire originated from Blanchett Graves, it could have really come from Alice Farm. Learning to correctly guess where sounds come from is challenging and takes both time and practice. Even so, it is an integral skill that can save you from an unnecessarily passive playstyle.

This may already be a staple in your loadout, but if not, it should be. A knife is crucial for killing zombies quietly and can also be used to damage bosses. The knife only costs 20 Hunt Dollars, so it's not a huge investment. The first aid kit can be used three times before disappearing and is a cheap and easy way to restore health. It only costs 30 Hunt Dollars and restores 50 health each use. Until you unlock Vitality Shots and Regeneration Shots, the First Aid Kit is an excellent way to restore health.

Now, this may not seem fun at first. You may want to jump right into the action, facing off against other players. Even so, Hunt: Showdown's Training mode grants the player valuable experience as well as Blood Bonds, which can be used to buy cosmetics. This Training mode familiarizes the player with fighting bosses and navigating through a horde of enemies, all in a safe environment without players.

It is easy to think that you know how to kill a boss, but when you're face to face with the terrifying Butcher, all book knowledge about killing bosses goes out the window. The Training mode gives the player practical, firsthand experience in killing bosses and sneaking past enemies, and it rewards them for their efforts.

After successfully extracting a bounty or simply completing a game during your first 11 Bloodline ranks, your character will gain upgrade points, which are used to acquire Traits. These Traits give the player small advantages, such as the ability to revive a partner from a distance and the ability to recover from poison quickly. Before queueing for the next match, make sure to spend your upgrade points on Traits that look interesting and complement your playstyle. Some helpful traits for new players include Greyhound, Resilience, and Hornskin.

Free hunters are an excellent way to learn the game and test out new weapons without the risk of losing Hunt Dollars. Each of the free hunter's items are considered contraband, so they cannot be sold, but they can be kept if the hunter survives the game and extracts. Many of the weapons will be low tier, but they are free.

When the new player is more comfortable with their abilities, they should start buying the paid hunters to the right of the free hunter. It should be noted that after each game, the free hunter can be shuffled with the "free reshuffle" button. After that first time, initial shuffles will cost Blood Bonds, which isn't worth the cost.

Under the "Library" section, the player can view their progress toward unlocking certain gun variations. To unlock a gun's variation, you must earn XP with that gun. This XP can be obtained from killing other hunters, shooting zombies, and inflicting damage upon bosses with that weapon. This is how players unlock variations such as scopes, ammo types, and explosives. All guns start out with iron sights, but scopes of varying lengths can be unlocked under that gun's "Library" section.

Summons are quest-like objectives that reward the player upon completion. These rewards change depending on the individual summons, although they can range from free weapons to Hunt Dollars. Players can activate two summons at a time, but a third slot can be unlocked with Blood Bonds, which is a high price for the limited value. Once a summons is completed, players can pick another summons to take its place. These summons reset every week and are a useful way to receive free items for objectives that are completed each game.

Related: How to Prestige in Hunt: Showdown

11. Don't Worry About Your MMR

It can be tempting to compare yourself to other players and feel discouraged by your matchmaking rating, but you must remember that you're just starting out. Even the most experienced of players started out in the 1 to 3 MMR range. With time, you can certainly climb the MMR ladder, if you so desire. In the meantime, it's crucial to come to terms with the fact that your MMR will be low when starting out, and it's nothing to be ashamed of. It only means that there's always room to grow.

At the end of the day, don't worry too much about your performance. It's perfectly fine to make mistakes, test your limits, and find out things the hard way. Hunt: Showdown is ultimately a game that is meant to be enjoyed and explored, not stressed over. Invite your friends, grab your guns, and discover all of the beautiful horrors the Bayou has to offer.

For more Hunt: Showdown guides, come check out How to beat every boss in Hunt Showdown here on Pro Game Guides.