Minecraft Dungeons has finally released, and that means people are slaying their way through monsters in the game. If you're looking to be at your most powerful, you're going to need a strong set of items to get you there. That's where we come in! We're taking a look at the Best Minecraft Dungeon Builds you can use in the game. We've got some earlier leveling options, as well as late game stuff that will have you dominating in no time.

Your build in Minecraft Dungeons will largely determine how you play the game. You can focus on melee, ranged, speed, soul, or artifact specific builds. These aren't the only options, but make up a large part of what you'll be focused on. Souls in particular is interesting, because the mechanic involves slaying monsters and gathering souls from them. Once you've accumulated some, you can use certain Artifacts that will utilize them to dish out damage or heal you or your friends. Your character is pretty much a blank slate, so any build is open to you as long as you have the items!

Builds in Minecraft Dungeons generally involve specific a melee weapon, armor, and sometimes the bow. You will also be looking for certain Artifacts which will act as your skills and abilities as you play the game. In some cases, your armor and weapons will require certain Enchantments. These are probably going to be the hardest to come across, because these items get a set of random enchant options, as well as a random amount of usable enchantment slots. That is going to be the large part of what you will be focused on maxing out when it comes to perfecting a build!

Keep in mind that these are very early builds, we should have more of an idea of what ends up being the strongest as we get further from the release date. We will be updating this post as new builds are found.

Without any further ado, we've got a look at our Best Minecraft Dungeons Builds List below!

This build is more for early game and leveling up. Most of these items aren't too difficult to come by because they aren't Unique, so you should be able to find them if you farm the right levels or get lucky. The main thing you're looking for is items that increase your Soul Gathering. These are what power up your Artifacts, which are the most important part of the build.

The Soul Reaper build revolves around the idea of collecting Souls by slaying enemies and then hitting them with big AOE damage. One of the keys to this build revolves around the Soul Robe, this is because it gathers 100% more souls than usual. This will double your Soul collection rate. The armor is also good for solo players because for the additional health. We're also using this armor because of the 50% buff to Artifact Damage which will be huge when using Harvester!

The Soul Knife increases your Soul Gathering by 2, so it's an important piece to the build. It's a bit different than most melee weapons because it does a thrust attack instead of slashing or swinging. It's something to get used to, but it's not too bad.

As for Artifacts, the Harvester is very strong and is the key to the build, because not only does it increase your Soul Gathering by 1, it does massive damage when you use it. When you trigger its ability, it will release some of your souls as an explosion and do significant damage to any nearby enemies.

If you get into trouble you can use the Soul Healer Artifact which will heal the most injured nearby ally! You don't need to worry, you count in that equation as well. You're collecting tons of Souls, so you can use this to heal yourself out of trouble. It gives you an additional way to heal, and is strong in solo or groups.

The Torment Quiver isn't as important to this build, but fits the theme nicely. It increases your Soul Gathering, and can give you some powerful arrows to fire. You won't be using this all that often and it isn't required.

You can see a similar build in action right here:

This is a fast melee striking build that revolves around a speedy melee weapon and some strong enchantments. You could potentially put this together earlier in the game, but finding some of the enchants might be difficult.

Fighter's Bindings is a perfect melee weapon for this build. It boosts attack speed and has the Turbo Punches ability that will increase your speed even further. They don't have the strongest base damage, but you'll be hitting so often that it won't matter.

The armor isn't super important, but Thief Armor is a solid choice due to the increase to melee attack speed.

As for enchantments, you'll want to be looking for Critical Hit. You will be hitting things so fast that you will be very likely to trigger crits quite often. With the Critical Hit enchant, this will triple the damage of your strike! Chains is another good one because it will keep monsters close together and allow you to take them out in a pack. Swiftfooted would be a nice one as well, this will give you movement speed when you roll. Cool Down is also a strong option because it will give you the possibility of stun locking enemies when paired with Light Feather.

For your Artifacts, you'll want to run with Light Feather as one of the options. This is a great Artifact, particularly when paired with the Cool Down enchantment. You can roll over and over into enemies and stun them to keep them from damaging you. Death Cap Mushroom is also very strong, it gives you an additional increase to attack speed. Flash Powder is another potential option, particularly if you don't have Cool Down. It gives you an additional way to stun enemies so they can't beat you up!

Check out this build in action in this video:

The Harp Crossbow is the key to this build because it fires out a TON of arrows for every one shot you take. This won't drain your arrows too fast, so don't worry about it. While this can be good on its own, to put it over the top is to get the Fuse Shot Enchantment on it. This will add a timed charge "every few shots" and deal 100% damage to nearby mobs. If you upgrade it once, you will get a bomb every 5th shot. Well, guess what? Each time you should the Harp Crossbow, that will be at least 5 shots every single time. So, each time you fire the bow it will be fired with a bomb that will explode for huge damage. 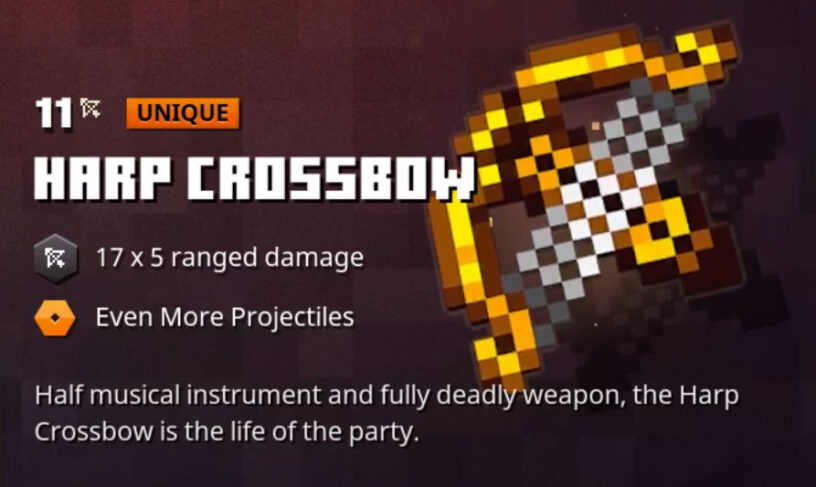 For your armor, you can just run with standard Hunter's Armor which increases health, arrows per bundle, and ranged damage. If you're lucky, you will come across some Archer's Armor which gives you the same buffs, but also includes a 15% movespeed aura. As for enchantments, look for Cool Down to reduce the timer on Fireworks Arrow.

You are mostly going to be firing your bow, so the melee weapon should be anything you want to use.

For your Artifacts, the main one you care about is Fireworks Arrow. When used with the Harp Crossbow, each arrow will have a firework on it so each one that hits will explode independently and cause massive damage. Wind Horn is used mostly as a way to keep enemies off of you so you can regroup. It's more of a suggestion than a requirement. The same goes for Death Cap Mushroom, but it is pretty powerful and great when combined with the Cool Down enchantment!

Here's a video showing off the combination of Fuse Shot and Fireworks Arrow on the Harp Crossbow:

This is our first look at Builds for Minecraft Dungeons! It's very early on in the game, so we expect to be updating this post frequently in the upcoming weeks. Check back again for new builds to try. If you've found something powerful yourself, let us know about it in the comments!