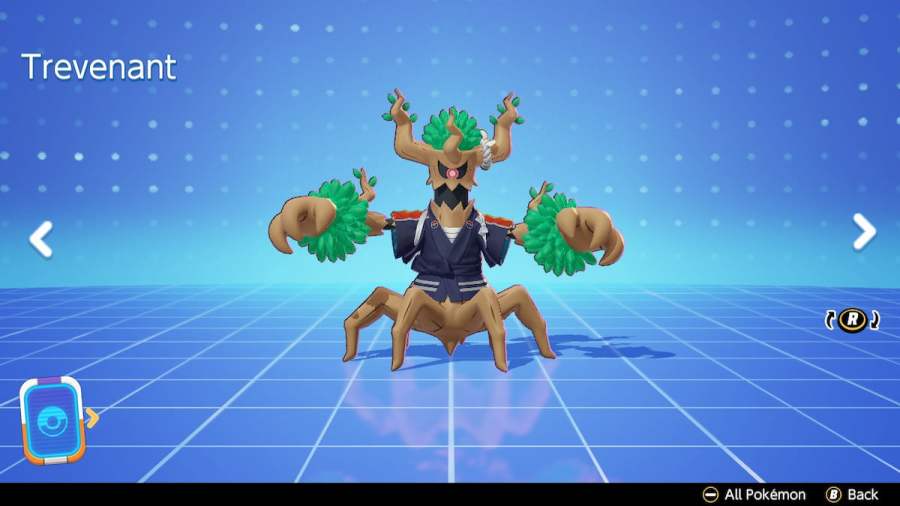 Trevenant is a Defender in Pokemon Unite, and a powerful one at that. It has a much higher HP stat than most Pokemon and uses a percentage of it to deal damage while healing itself. Many of its moves can the ability to interrupt opposing Pokemon, doing Trevenant work very well with ranged characters that need help getting away from melee attackers. There are many ways to play Trevenant, but these are the best Trevenant builds in Pokemon Unite.

Trevenant works best in team compositions that can double up on stuns, area of effect attacks and make the most of these stuns. With Ranged Attackers, Trevenant can keep opposing Pokemon at a distance, and with Melee Attackers, players can push enemies into their team or a more favorable area. Trevenant players have excellent recovery and can avoid returning to the base with their Ability, Natural Cure.

At level one, Trevenant can learn either Branch Poke or Will-o-Wisp. Will-o-Wisp deals more damage and adds a damage over time effect for three ticks. While burned, the target will also have its Attack and Special Attack reduced by 5% for three seconds. Branch Poke, meanwhile, does less damage but will heal Trevenant while decreasing the target's movement speed. Each Boosted Attack of Trevenant will restore 5% of its HP, making it a valid strategy to increase its Attack Speed.

At level five, Trevenant can learn either Wood Hammer or Curse over Will-o-Wisp. Wood Hammer is strong and has two stuns attached to it. The first attack of Wood Hammer stuns, but if it misses, the follow-up attack will not be available. This second attack will stun longer based on how much HP Trevenant has. Trevenant will use 7% of their HP in exchange whenever this move is used. Conversely, Curse uses 3% of Trevenant's HP each second for six seconds. When fully charged and unleashed, Curse will reset the cooldown of its other moves. It decreases the speed of enemies hit based on how low Trevenant's HP is, making it synergize well with melee teammates.

At level seven, Trevenant can learn either Horn Leech or Pain Split over Branch Poke. Horn Leech will shove enemies away and recover more HP when hitting enemy players. Trevenant's following three basic attacks do more damage after landing and will reduce the cooldown of Horn Leech by .5 seconds for each hit. Pain Split will link Trevenant to an enemy Pokemon, causing it to take damage whenever Trevenant is damaged. This reflect damage is increased depending on how low Trevenant's HP is and will begin to heal Trevenant if its HP is lower than the Pokemon it's been linked to. When used, Trevenant will have its movement speed increased for two seconds.

At level nine, Trevenant will learn its Unite Move Phantom Forest. This marks enemies to take more damage from their basic attacks for six seconds and grants Trevenant a shield. The shield gets stronger for each enemy that is marked and increases Trevenant's HP recovery effects by 50% while shielded. After using the Unite Move, Trevenant will get a 30% movement speed increase and obtain a 20% Max HP Shield regardless of whether it hits anyone.

Trevenant has a few different playstyles and can also be changed based on the team composition. Held and Battle Items for the Pokemon can drastically change their effectiveness in battle. Whether this means going for more survivability, more damage, or somewhere in between, players should try to find what works for them and find what synergizes best with their own playstyle. They work similarly to Slowbro in terms of disrupting enemy players over doing pure damage, however, both Pokemon can do both very well.

While good builds include Pain Split and Wood Hammer, the synergy between Curse and Horn Leech makes it the best pair for Trevenant players. This plays around with cooldowns and keeping alive while constantly disrupting enemies.

Using Horn Leech and Curse, players can stun enemy Pokemon while slowing them down. What makes these moves so strong is the fact that Horn Leech's cooldown will reset after Curse is released at full charge, making it possible to stun enemies continually. Buddy Barrier can keep players and their allies alive along with Focus Band. Rocky Helmet makes the defensive build have an offensive edge and can be paired with X Speed or Potion for when players need a way out or to stay in the fight a little longer.

Rather than using Held Items that increase Trevenant's survivability, players can try to increase their offensive stats instead. Horn Leech and Curse are still the best options for damage, however, Weakness Policy, Rocky Helmet, and Attack Weight can give players much more damage output. Potion is recommended for this build as the safety of Focus Band and Buddy Barrier isn't there. Alternatively, an Aeos Cookie or Score Shield can be used instead of Rocky Helmet to gain more maximum HP or protect players while they score.