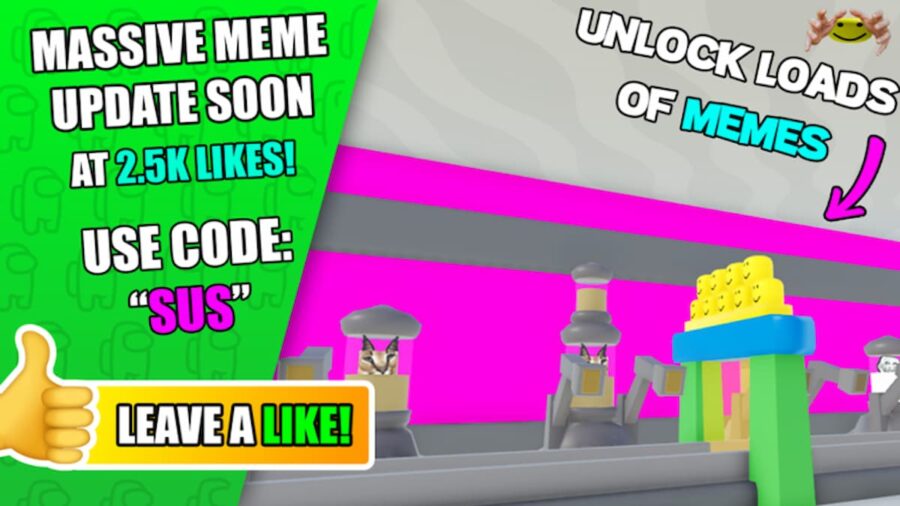 Meme Tycoon is a Roblox tycoon game like no other. Build up your meme empire, or become a meme yourself. This tycoon game brings comedy and makes it entertaining. Earn and spend Memebux as you become a meme lord.

Codes in Meme Tycoon will give you various rewards, like memes, cash, and boosts, so keep an eye on them. These will also have expiration dates, so you must use the codes before they expire. We have compiled a list of available codes so you can earn gear and more in Meme Tycoon.

These codes for Roblox Meme Tycoon no longer work:

Here's everything you need to know about Roblox Meme Tycoon codes.

How to redeem codes in Meme Tycoon

How to get more Meme Tycoon Codes

For more codes, join the Meme Tycoon Twitter, Community Group, and Discord. You can also bookmark this page, as we will update this list once new codes are released. So be sure to check back often to see if there are new codes for Meme Tycoon.

The developer controls codes for Meme Tycoon, and this is who determines how long they are active. Some codes may expire quicker than others, and some may not work with others. If a code does not work for you, double-check if there is a spelling error, the code isn't active yet, or it has already expired. To help solve that issue, bookmark this page and come back often to see if Meme Tycoon has added new codes or if some are expired.

What to do with Memebux in Meme Tycoon

Memebux are used to upgrade your base, purchase memes, and add decorations. Any button you see that is red can be activated by spending Memebux. As you upgrade your tycoon, you will earn more Memebux which you can put back into your tycoon to continue expanding it.

What is a Meme Tycoon?

Build your meme collection and expand your tycoon to be the greatest ever. Collect and display your favorite memes to get laughs from friends and foes alike. When the good times are over, duke it out on the battlefield to prove who has the best memes.