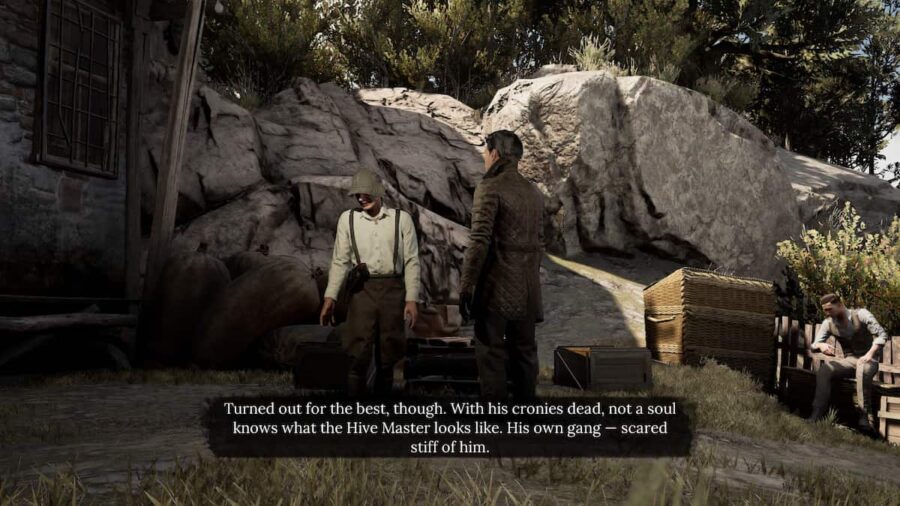 Among your story cases in Sherlock Holmes Chapter One, you can pick up side-cases all over Cordona. Some are easy to find, such as the Police Cases at the Cordona Police Station. The final police case, Plan Bee, is automatically given to you after completing the Police Case The Scapegoat.

Featured: How to solve the Sacrificial Lamb Case in Sherlock Holmes Chapter One

You can begin investigating this case right inside the police station. Pin the clue The Fate Of Placido before heading behind the front desk and into the doors to the left. You'll find Chief Inspector Placido's office to the right of the evidence room.

Scan the room and interact with the clues—you'll find a missing service pistol and a lot of information regarding a gang. Now pin the clue Placido's Office to find a few more things to scan in Concentration Mode, most importantly, the painting of some birdhouses in a field. Interact with it and it will reveal some hidden clues.

You'll find a severed ear and some more documents about the gang. At this point, Jon will tell you to take the ear. If you decide to do so, you will complete the Jon Challenge Ear in a Jar. Now pin the clue Notes on the Hive Master and travel to the City Hall Archives. Choose to investigate the following subjects:

You'll find that you're looking for Queen's Warehouse, which can be found right by Stephenson's Bridge, on Clay St in Northern Miner's End. Pin the clue Property of B. Queen, and head there.

When you arrive at the warehouse, you'll find two workers that you can eavesdrop on. Interact with the ear icon and choose to keep the following phrases:

Now head into the warehouse, where you'll be thrust into a battle with three waves of enemies. Stay on the move and use the environment to your advantage here. When the battle ends, head through the gate on the far end of the warehouse and up the stairs to the Hive Master's office, where you'll find a few areas to investigate:

You'll find some more information on the Hive's operation and a burnt letter. From here, enter your casebook and start a chemical analysis on the burnt letter (see solution below).

Featured: All cases in Sherlock Holmes Chapter One

Note: The solution above was specific to our playthrough. Depending on how far you've progressed in the main story, you may have to find a different solution to this chemical analysis.

Now pin the clue Letter from H.M.—it will lead you to the Apiary, which is found in the forest section of northwestern Miner's End, west of Wiggins St.

You'll find an older man waiting for you on the hill. Speak to him and observe him. For the best possible outcome:

Return to the police station and find Sergeant Stark in the room to the left of the evidence room, opposite Placido's office. Speak to him, tell him that Placido is dead for the best outcome, and grab the achievement Well Earned Rest.