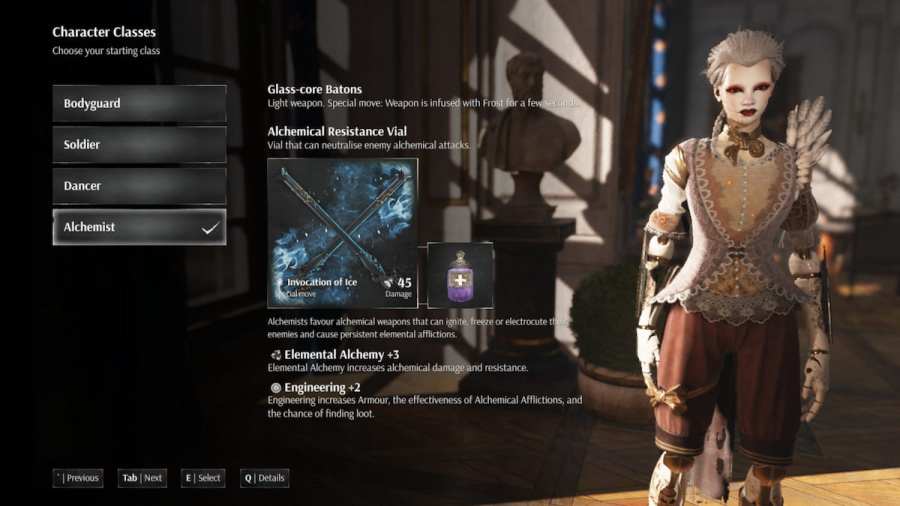 The Alchemist class in Steelrising is the easiest to make into a hybrid build, as there are very few weapons that can work well by just leveling Alchemy. Power and Agility will be secondary until players feel their damage lacking. There are many tools to make Alchemy very powerful, as long as players are willing to have a bit of a slow start. These are all the things players need to know to make a good early, middle, and end game Alchemy build in Steelrising.

Similar to the Bodyguard Build, the Alchemist has a slower playstyle in the beginning compared to other classes in Steelrising. Weapons that have an Alchemy Affinity will all scale with Power and Agility, except for Muskets. These weapons will only deal either Fulmination, Frost, or Flame damage while building up their respective Alchemical Affliction. Players should focus on Elemental Alchemy and Engineering to increase their damage and the duration of their status effects. Once players find a weapon they enjoy or an Affliction they like the most, they should focus on making that Affliction as powerful as they can.

Players will begin the game with points in both Elemental Alchemy and Engineering, the main stats to build upon for a powerful Alchemist build. Elemental Alchemy will increase Frost, Flame, and Fulmination damage while Engineering increases the rate at which Afflictions are built up. These are all the tools that players will have access to at the beginning to take advantage of their strengths:

Players will quickly learn that Frost weapons are the safest bet when playing with any build. Fulmination does a burst of damage when an enemy is Afflicted and Flame will cause damage over time. Whatever damage type players gravitate to, they can switch whenever they want with this build and experiment however they like.

By the time players reach the middle of the game, they should have an idea of which Affliction they like best and can build upon one or two weapons to deal Afflictions quickly. Modules make a big difference in how effective a player's damage will be, so stacking them is a great idea to avoid having to Freeze enemies every encounter. These are all the things players have access to in the middle of the game for their Alchemist Build:

Strategies for Alchemy builds tend to revolve around Freezing enemies and then switching weapons to either a powerful Physical weapon or a Flame or Fulmination weapon while they are stunned. This is the safest way of playing, but isn't the only way of getting through the game as an Alchemist. Flame and Fulmination do a lot of damage when Elemental Alchemy is fully leveled up and don't necessarily need to be swapped constantly.

There aren't many changes in the late game of Steelrising for the Alchemist apart from getting better Armor and Modules. These are the new resources players will have access to by the end of the game:

By the end of the game, every enemy can be taken down in just a few hits, and in some cases, just a single Affliction of Fulmination or Flame. There are many different ways to play with Alchemy and because it can be used with Agility and Power, many players will gravitate towards Alchemy regardless of whether they picked the class at the start.