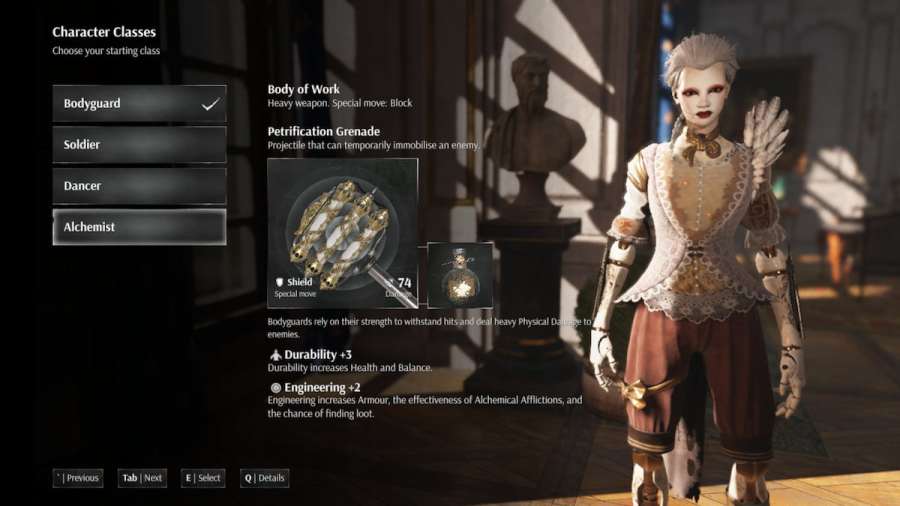 The Bodyguard class in Steelrising relies on heavy weapons that deal devastating, strong attacks. There are five different weapon types that players can use, each dealing high Impact damage. Players may have difficulty getting used to a slower playstyle, but much of the Bodyguard's strengths rely on its ability to tank hits. These are the best builds for Bodyguards in the early, middle, and late game in Steelrising.

The Bodyguard's biggest strengths rely on face tanking while dealing damage back. Durability and Engineering are important in keeping the player alive while dealing lots of damage back. Increasing Balance, Health, and Armor will make the player nearly unkillable, but more importantly, unstaggerable. It relies on five weapons types, each of which has its own strengths and weaknesses.

The Bodyguard starts off with more Durability and Engineering, making it the best defensive option of the four classes. It is relatively slow, but players will be able to take a lot of hits with no problem. Just because players start with a Power Affinity weapon does not mean they have to stick with it the entire time. To play to the class's strengths, however, players should go for weapons that deal lots of Charged Attack Damage while using Modules that increase this. At the beginning of the game, the most optimal build would be:

If players feel they aren't doing enough damage, they should level up Power for a bit. Balance should only need to be high enough to not stagger when hit and isn't something that players have to level too high to accomplish.

Related: All Weapon Types in Steelrising

After getting much better equipment, shaping a Charged Attack build becomes much more feasible in Steelrising. Players should be able to withstand nearly any hit without being staggered and even use Alchemy weapons to force enemies to stay still if they are overwhelmed. Frost and Petrification Grenades are extremely useful should players want to use them. The Fire Chain can still be used to great effectiveness, as well as the Wheel of Vengeance, but these are the additional options that players should get access to:

The upgraded Modules at this point in the game will lend themselves greatly to the player and give them what they need to cover anything they haven't been upgrading. The same method of using Charged Attacks to deal damage still remains, but once players feel like they have enough Durability, they can start to really focus on doing high amounts of damage with their build. Investing in Power more to start to take enemies down in one fully Charged Attack is the goal.

The late game of Steelrising should mean players have at least one or two of their Module Slots fully upgraded. If players have found a weapon they enjoy, they should stick with it. By the time that the end of the game rolls in, they will have found even more weapons, but they don't necessarily have to use them. This is everything players can use for their Bodyguard builds:

A Bodyguard build is a bit different when compared to a Solider build, but it is a safe bet for players that are new to the genre and want safety over raw strength.