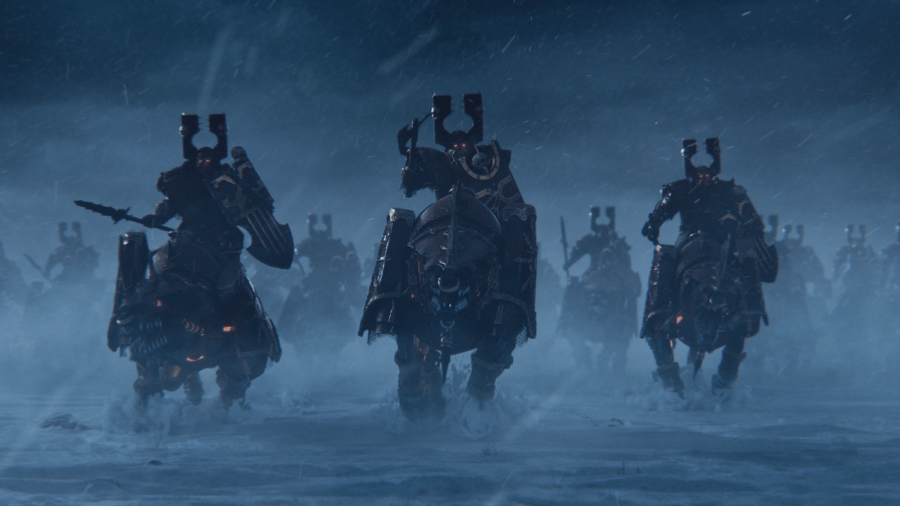 Here's every Total War Warhammer 3 race that's been confirmed so far, and some that will potentially be in the future.

There are six confirmed races in the newly announced Warhammer 3' four themed around the gods of Chaos and two around the human factions Kislev and Cathay. Here are all confirmed races listed below; if more get confirmed in the upcoming weeks and months before release, we will add them to this list.

In our all factions In Warhammer Total War 3 article, we already discussed the possibilities surrounding these factions and what we may see from them in this third Total War Warhammer game. To start, we think the four Chaos will make up a new faction separate from the one for Chaos; we also touched over the influences and unit roster possibilities for both Kislev and Cathay. That said, if you want to learn more about all six confirmed factions, you can find a link to our article below.

For example, according to the lore where Cathay is on the map shown above, several other factions exist near it. With this in mind, here are all unconfirmed races we think will make an appearance in Warhammer 3 at some point.

The first and most likely to appear as one of the First DLCs for Total War Warhammer 3 is the Orge Kingdoms due to the fact their kingdom is literally to the west of Cathay. Along with this, lore-wise they have been battling Cathay for centuries, so it would only make sense to include in them at some point. They are also one of the major factions with an army book missing from the series, so it's not hard to put two and two together.

That being said, what is the Orge Kingdom? To start, the Orge Kingdom is a brutal domain of scattered tribal kingdoms of large humanoid creatures known as Orges. They reside primarily in the Mountains of Mourn area and spend most of their days roaming as looting, pillaging, bandit mercenaries. The Orges Kingdoms are also constantly at war with each other and worship a god known as the Great Maw, with tributes of ill-gotten gains and loot.

Their legendary lords will also probably be either or both Greasus Goldtooth and Skrag the slaughter, as they are some of the more notable characters of their factions. Other possibilities include Bragg the Gutsman and Golgfag Maneater.

Chaos Dwarfs are another highly plausible faction that could potentially see a race DLC treatment for Warhammer 3. They would also be a highly intriguing concept within a total war game, as something of a blend between the dwarfs, orcs, and warriors of Chaos.

Lore wise, all you need to know is that the Chaos Dwarfs are the descendants of a lost clan that turned to worshiping a god known as Hasult. They lost nearly all resemblance to traditional dwarfs and can practice magic, in fact, they really... really love fire magic. Along with this, some of them turned into half-dwarf half-demon bulls - which is a lord type and calvary type in tabletop - and they also enslave greenskins, and half tons of demon possed hell cannon heavy artillery.

The Chaos dwarf lords will probably be Drazhorath the Ashen and Astragoth Ironhand, with a few others as free DLC.The faction is also smack dab middle in of the dark lands, so if the map is going to stretch all the way to Cathay, there is no doubt the Chaos Dwarfs are a plausible future faction DLC.

Another possible one, but highly unlikely to be its own faction, is the Hobgoblin Empire or Hobgoblin Khanate. I feel it would be more plausible for this to be added at some point as a lord pack rather than its own faction. Mostly, hobgoblins would be far too similar to greenskins to warrant it, as there is not much known about their unit roster because they never got a full army book.

None the less, it is very likely we will see the Hobgoblins in some form or another as they are also tied directly to the Chaos Dwarfs and their unit roster and lore. Along with this, lore-wise, they are situated to the north of Grand Cathay, and has been known to raid the empire frequently. Grand Cathay even maintains several forts to defend against the onslaught of the hobgoblins.

The Hobgoblins would be honestly one of my personal favorites to be added as they are an exciting faction that was influenced by Mongol and step people cultures. The faction is even ruled by a one Hobgobla-Khan, who will most likely show up as the faction's lord.

Southwest of the Empire of Cathay lies this kingdom of mystery; it's essentially Warhammer's version of India and could possibly be a future faction but unlikely. However, it's worth noting that there is almost nothing concrete regarding what a Kingdoms of Ind would look like; our best guess it would have units themed around Indian mythology, etc.

Our last idea of a future DLC faction would be Nippon; this is because, according to the lore, Nippon is situated right off the coast of Cathay, so its inclusion is possible. Nippon is the Warhammer version of feudal Japan, so the idea of a samurai faction being added to Total War Warhammer 3 is exciting.

The faction also has had a few run-ins with other already present factions in the game, such as the Dark elves and Skaven, so its possible inclusion could spell some exciting battle scenarios. As for their unit roster, it's pretty much the same situation as Cathay other likely future factions; there is not much in the way of lore surrounding it, nor was there an army book written on them. However, our best guess their roster would be something similar to units in Shogun 2 and a mixture of Japanese mythology.

All Factions in Warhammer Total War 3