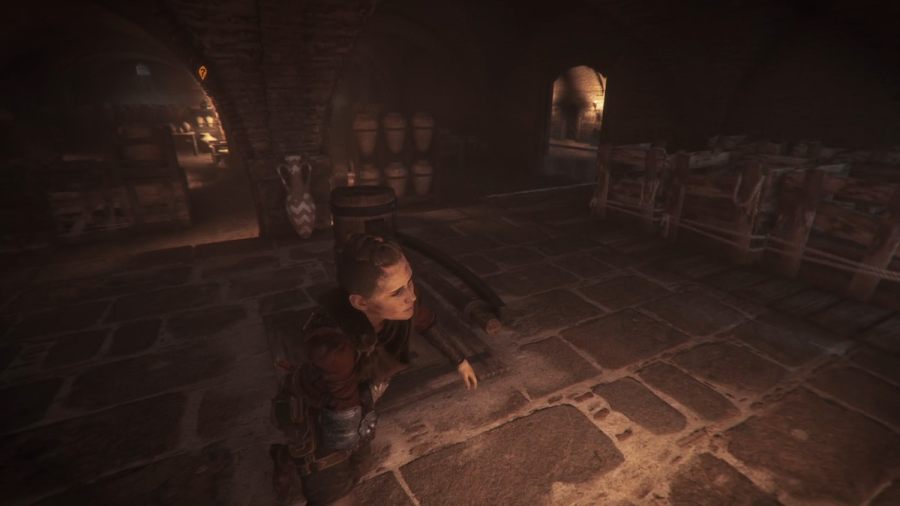 Things suddenly become worse for Amicia as the Count betrays her and attempts to kidnap Hugo for his wife. Murder and pleasing the Mother is the only thing on his mind, but how can you escape from the Count in Chapter 12 of Plague Tale Requiem?

How to escape from the cellar in A Plague Tale Requiem

To find your way out of the cellar in Plague Tale: Reqiuem, you must turn one of the two crank wheels on opposite ends to open up a metal gate closest to you. Through this gate is salvation. However, turning the wheel is extremely noisy and will instantly alert the Count to your presence. Progress is not lost upon leaving the wheel, so flee when the Count is almost in range.

Stealth in this room becomes difficult as plenty of vases will instantly shatter and attract the Count's attention if you brush past them. So try not to stay close to anything when crouched. The easiest way to open the gate is to lock the Count in one of the rooms opposite the gates.

Go into one of the rooms, smash up some vases and make the Count come into the room looking for you. Escape from sliding through the gap in the wall, then quickly stealth around to the door and close it. Doing so gives you time to rush back to the wheel crank and open it. The Count will eventually escape, so be swift.

If the gate doesn't fully open, rinse and repeat. Lock the Count in the other room. Doing it twice will give you plenty of time to open the rest of the gate and escape from the cellar.