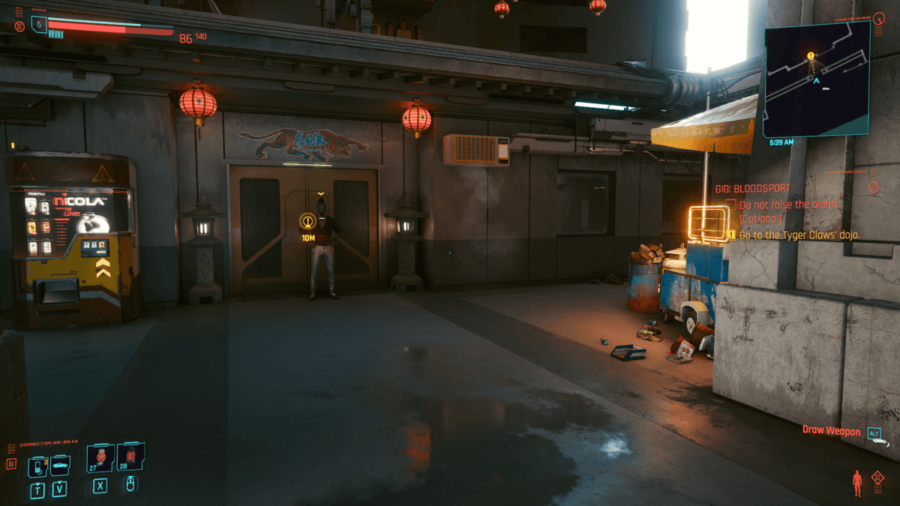 One of the several types of GIGs in Cyberpunk 2077 are SOS Merc needed quests. In these quests, players will be tasked typically with rescuing an NPC; these GIGS also vary in difficulty, and the GIG Bloodsport is no exception. That said, if you keep reading, we will give you the rundown on how to complete the Cyberpunk 277 Bloodsport GIG and how to save the NPC Roh.

How to not set off the alarm in the GIG Bloodsport 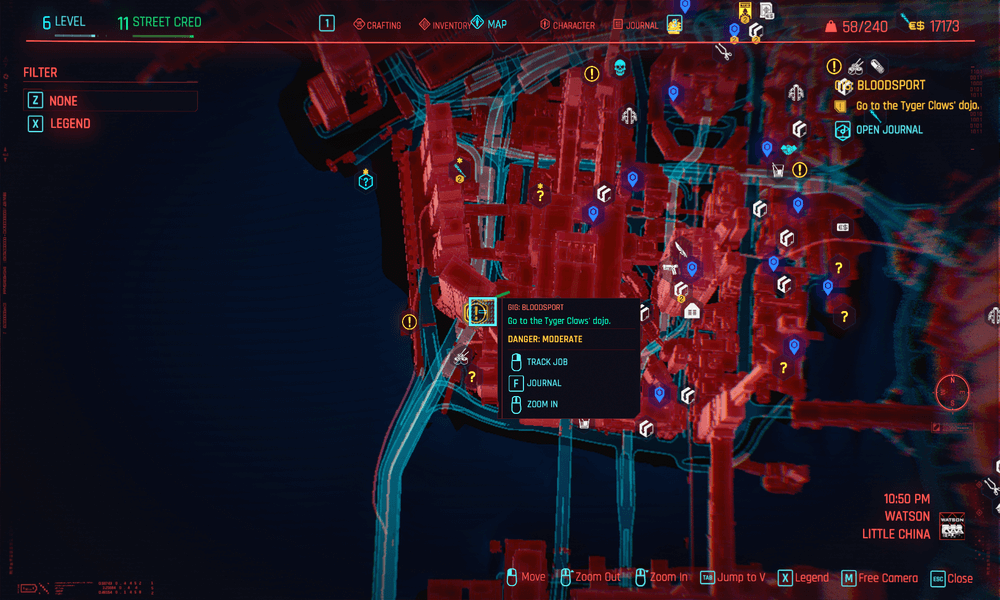 To save Roh in Cyberpunk 2077's Bloodsport GIG, you will need to work your way inside to the basement of the Tiger claw dojo by either gunning down all Tiger claws gang members or sneaking around them in the location shown above. However, raising the alarm will fail the optional objective and put Roh at risk, so it's better to go the safe and quiet route.

But before you can do the quiet route, you will need first to locate Roh, which can be done by accessing a specific computer in an office and swapping the cameras. Along with this, it will also be a good idea to scope out the dojo, as there are multiple entry points, but depending on your current skills, some might not be available to you.

Because of this, we highly recommend leaving the area and holding off on this quest until you have at least the following points in the attributes listed below. 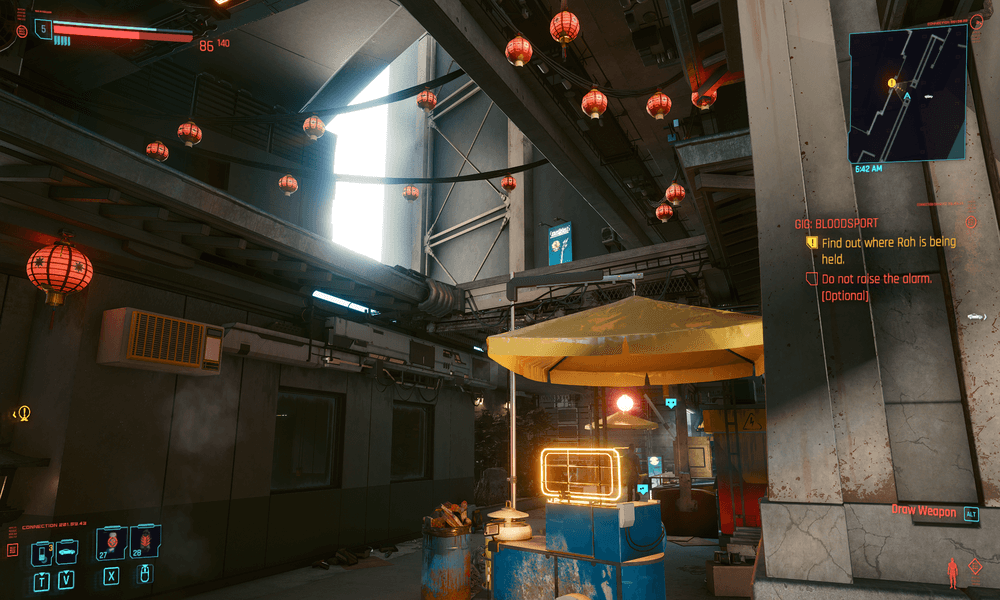 Once you get either one or two of the amount of attribute points listed above, start by accessing the building's roof, as two entry points will be up there. You can access the roof by jumping onto an object like the umbrella shown above near the entrance and then the metal walkway above it. 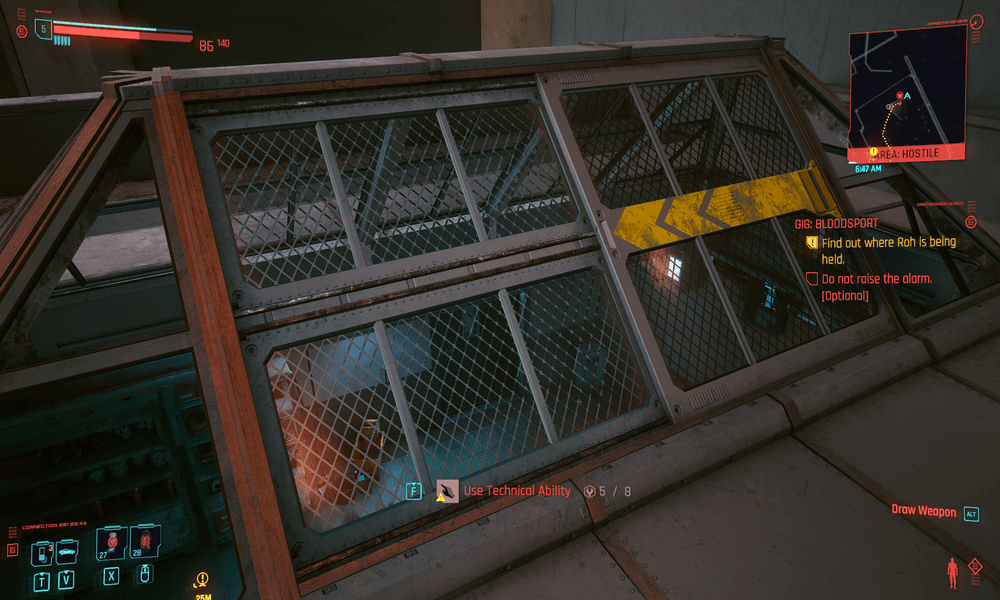 After this, you can then access two entry points that are windows; one is on the left on the other side of the one facing V, and the other towards the back of the building. The window closest to V will not require any attribute points to open, but the one towards the back you will need to have eight points in technical attribute to open, so if you don't have those points, we recommend going with the one shown above instead.

However, it's worth noting that the other point of entry is probably the best entry point aside from one other to use for this quest. This is because the entrance to the basement- where you will eventually need to go- is literally below this window. It is also worth noting that another doorway leads inside to this exact area as the roof window. To find this door, jump off the roof and go back to the entrance. You will need to go left and straight down from the dojo's main entrance. 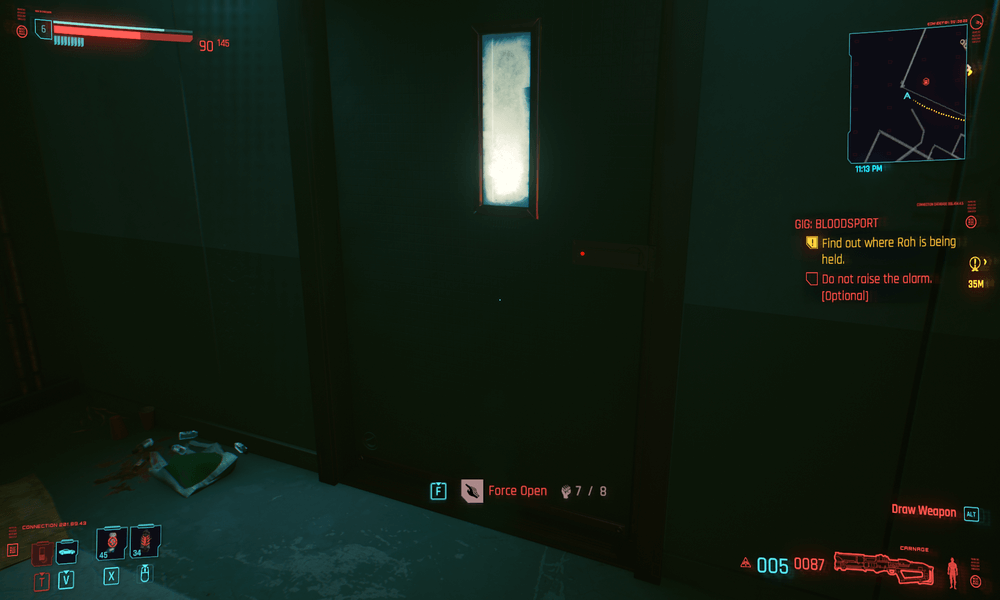 As shown above, the side door will be in this location and will require the player to have at least eight in the body attribute. So depending on your character, you should consider either this entrance or the one on the roof. For now though, hold off using either entrance and go back to the roof and to the first window we mentioned. This is because you still need to locate Roh and as a side note, this method will be the best way for you to complete the quest if you don't have eight body or technical. However, it will be notably harder to complete it, but it is not impossible.

Related:Cyberpunk 2077 GIG: Backs Against the Wall – Where to find the stolen medicine

How to locate Roh In the Tiger Claw Dojo 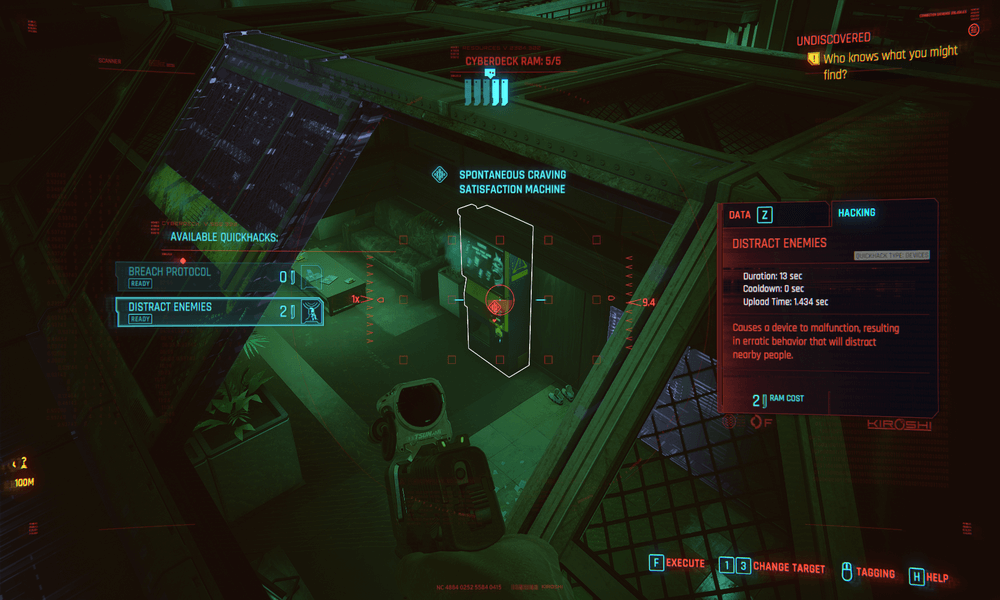 Once you are at the first window, open it but be warned there will be at least one guard patrolling inside towards the left area from the window. We recommend using your hacking ability to mark him and using nearby hackables to draw him away from the main lobby. You can do this by holding the hacking button over an object and pressing "distract enemies." 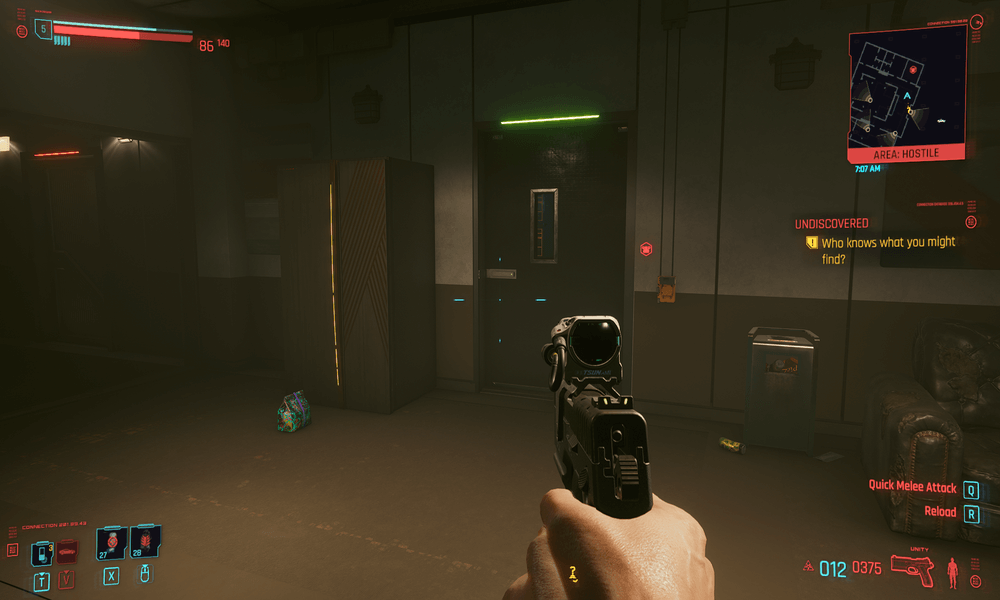 Once he leaves and is facing away from the opening, drop down and take them out and hide their body. After doing so, enter the office room, as shown above; inside the office, you will find a computer, and you will need to open it by holding the interaction key. 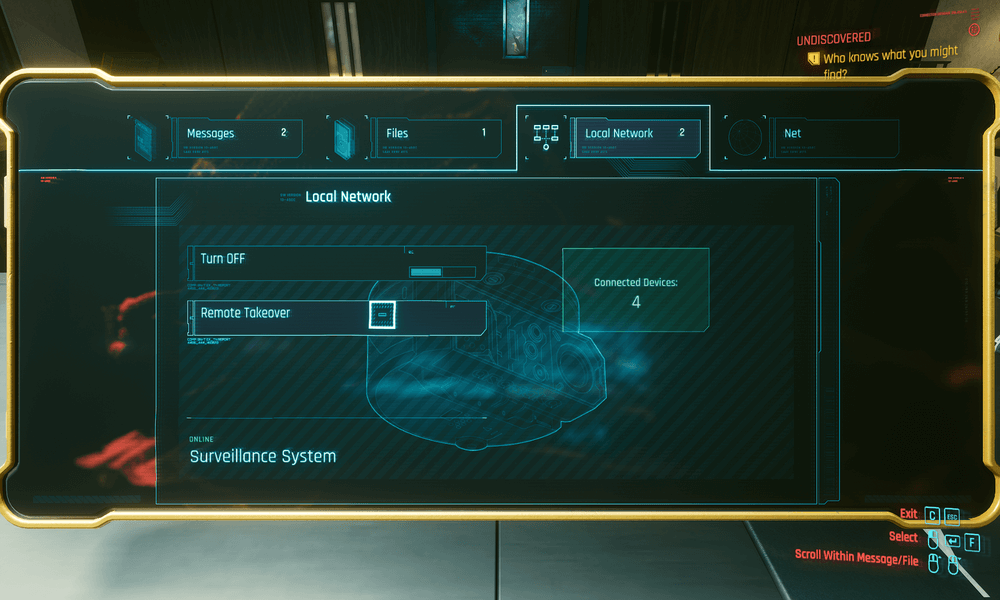 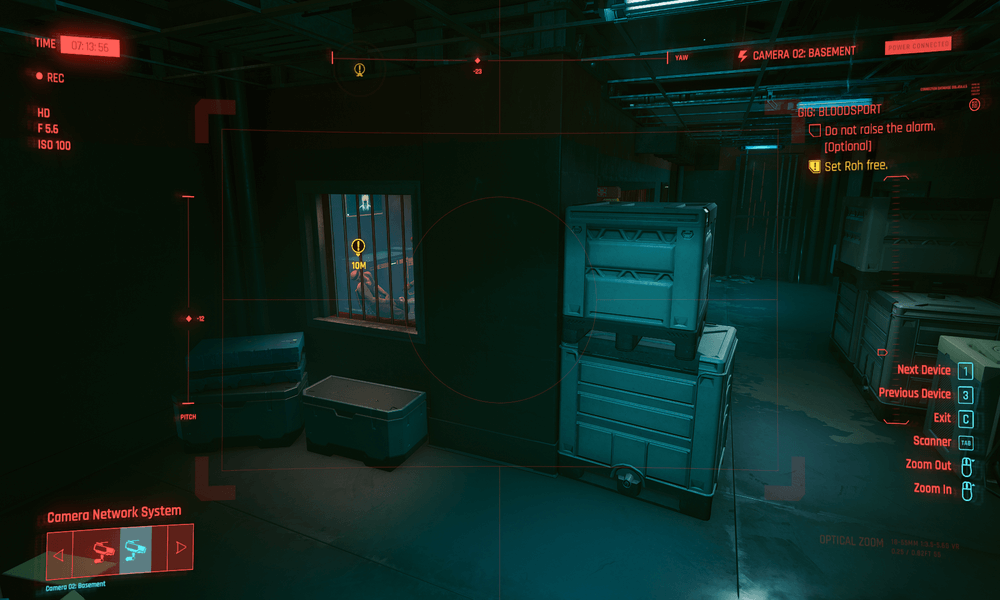 Upon doing so, you will discover Roh's location and can then exit the camera; but before you do, be sure to shut off the cameras to help you later in this quest. Once the cameras are shut off, you can then proceed to the next step in this guide; before doing this, be sure to loot the office, especially next to the camera, as there will be some eddies stacked up.

Related:How to do the Happy Together quest in Cyberpunk 2077

How to Save Roh in the GIG: Bloodsport 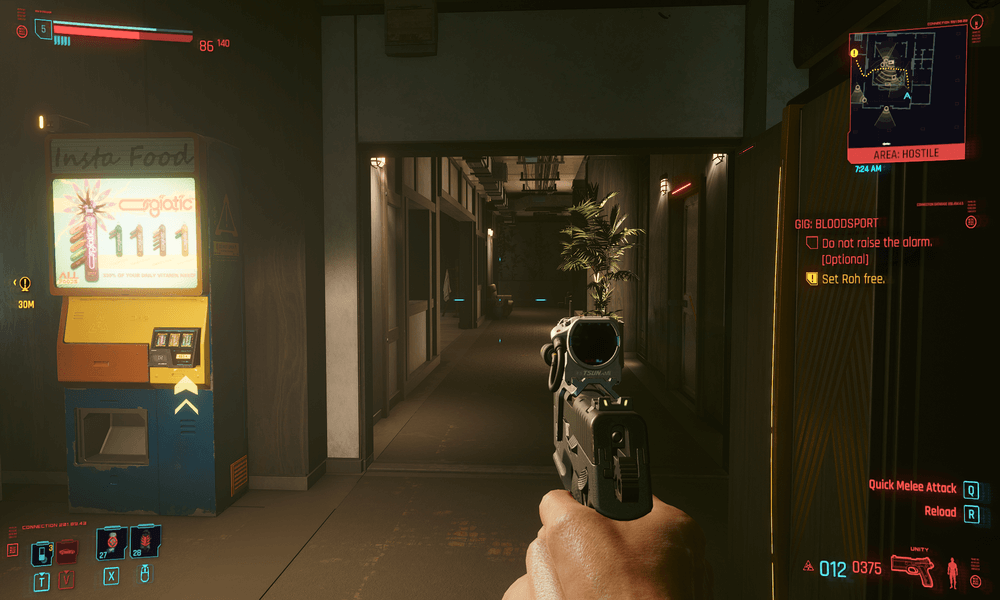 To save Roh, you have three options, either using two of the side entrances - the one on the roof and outside of the building - or sneaking all the way around. But, like we already said, the third option is notably more challenging, so if you instead want to do one of the other two options, skip to the "How to escort Roh out of the basement" section of this guide. 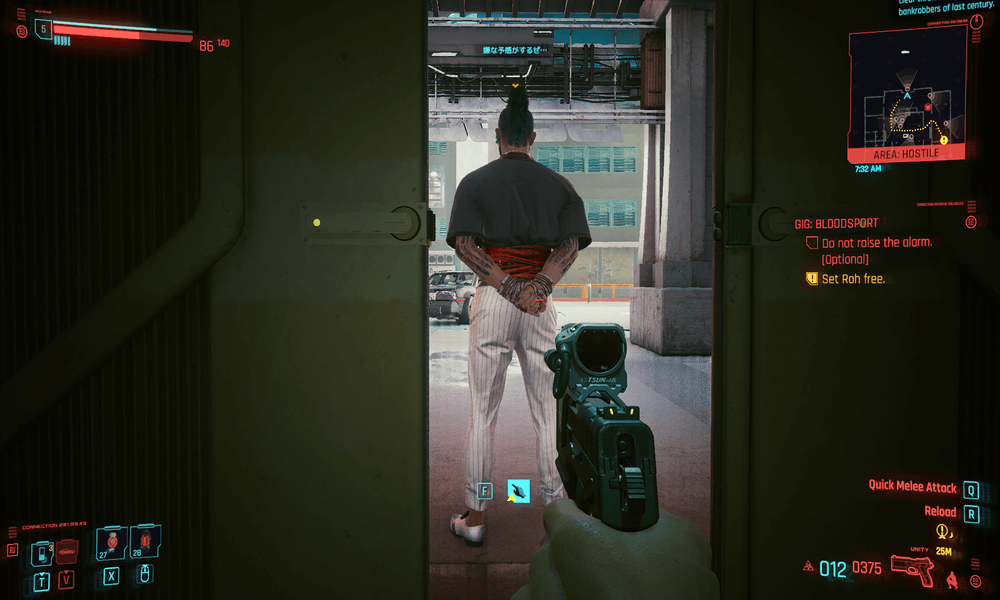 As a side note, if you want to do one of the other two options, you will have to either leave through the main entrance or the way you came into the dojo. To leave from the main entrance, you will need to be fast to take out a guard that is standing in front of the door. This can be pretty challenging as, more often than not, he will turn around faster than you can take him out; due to this, it's better to go with the other option. 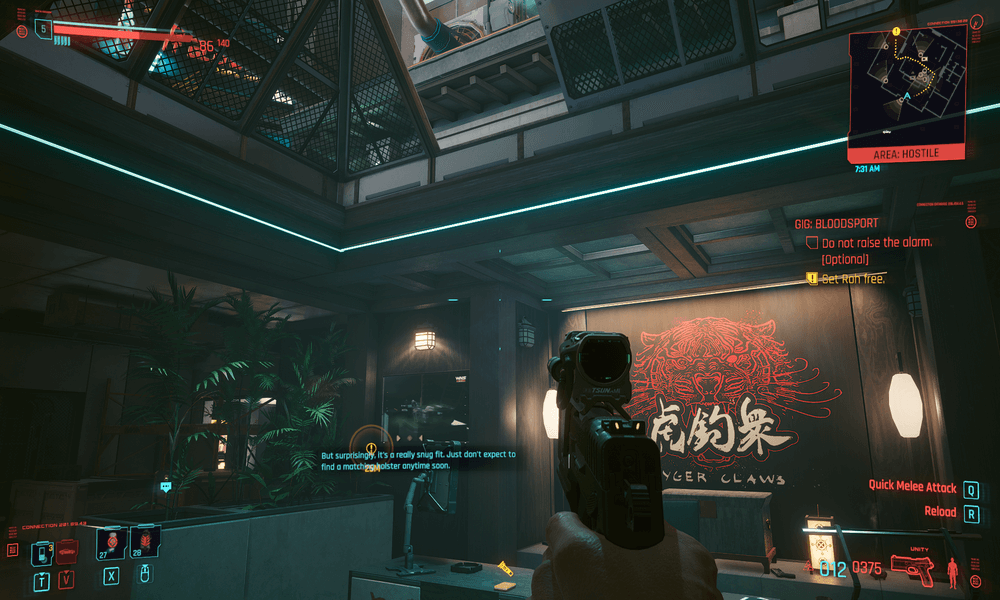 To do the other option, which is to leave back the way you came, you will need to jump on the PC monitor as shown above. Afterward, try to jump and catch the open roof window's ledge; this may take a few attempts, but it is possible. Once you get on the roof, you can then head to one of the two side entrances to the basement, depending on your skills. 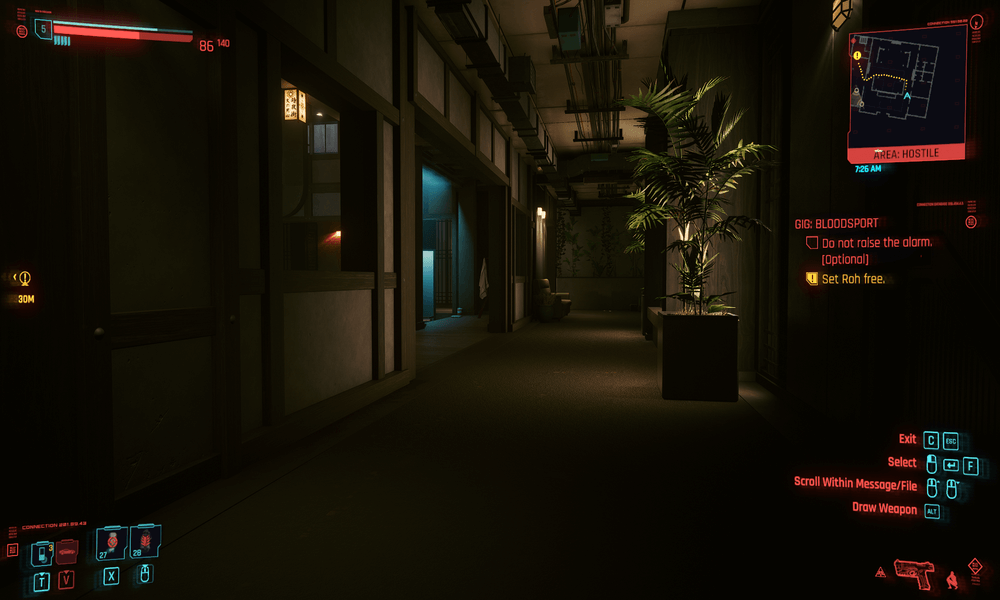 Now, for the more challenging route, you will need to exit the office room and head down the hallway towards the right. When you reach the point, as shown above, you will need to start crouching; you will also need to avoid alerting the tiger claws in the central room. 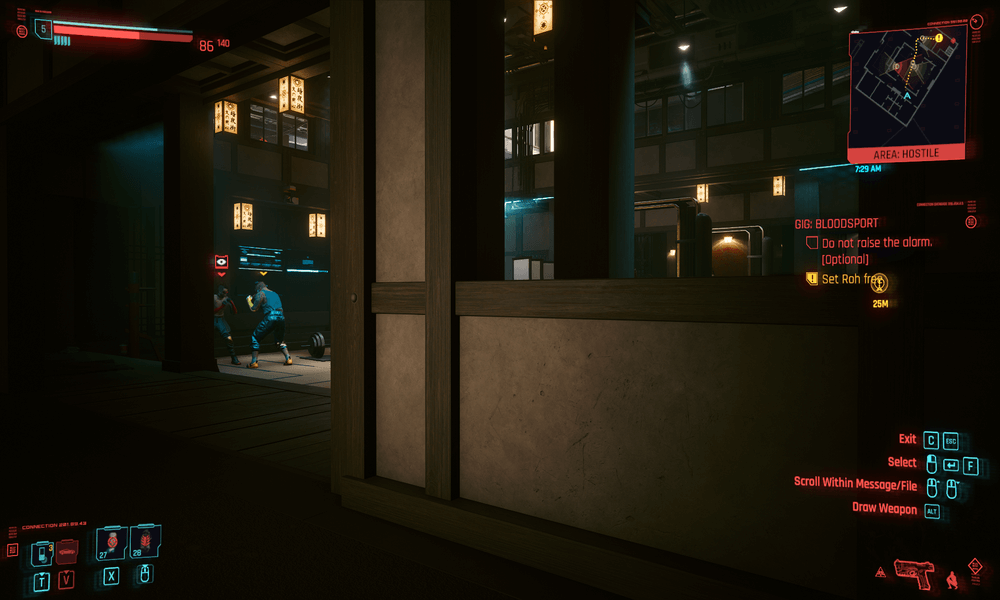 This part will be challenging as, at all times, at least one will have a line of sight of the hallway you need to go through. Because of this, you will need to crouch run past them, and you will need to do it fast and hide right after and wait out their notice meter. 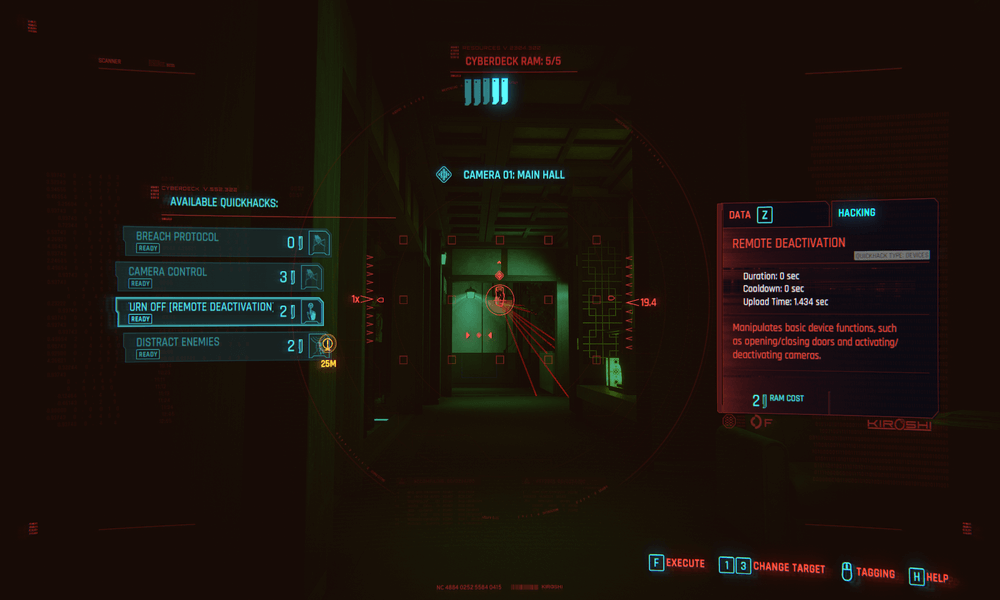 Keep doing this until you reach the spot shown above; here, you will need to disable the camera so you can continue progressing to the basement. Once the camera is disabled, continue moving to the next part. 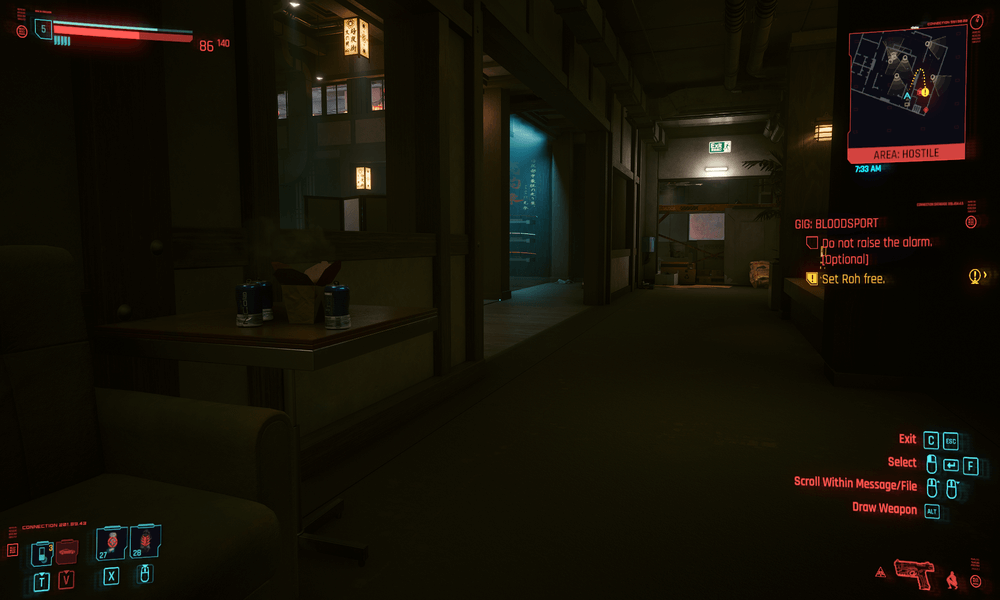 When you reach this section, which is around the corner near the camera you disabled, you will need to look at the top right of your screen and see where the enemy is in the room up ahead. This is because this enemy will sometimes stand facing the doorway entrance, which will make it nearly impossible for you to get inside without setting off the alarm. 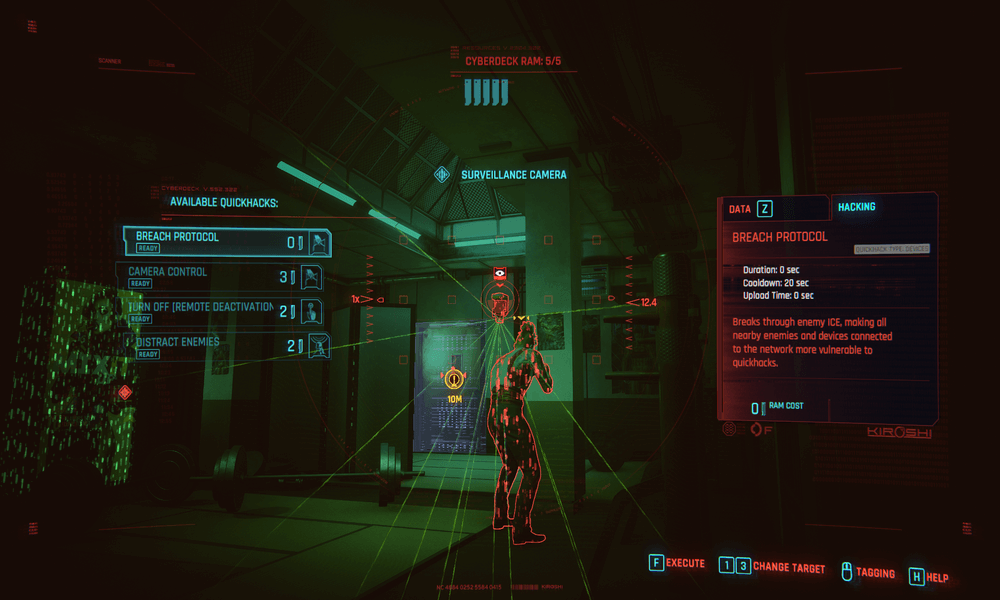 That said, keep monitoring the mini-map until they move away or are not facing the doorway. Once they move, continue like before and stealthily take them down; before entering the room be sure to take the camera shown above out by hacking it. Afterward, you can find the entrance to the basement past the door shown above.

How to escort Roh out of the basement 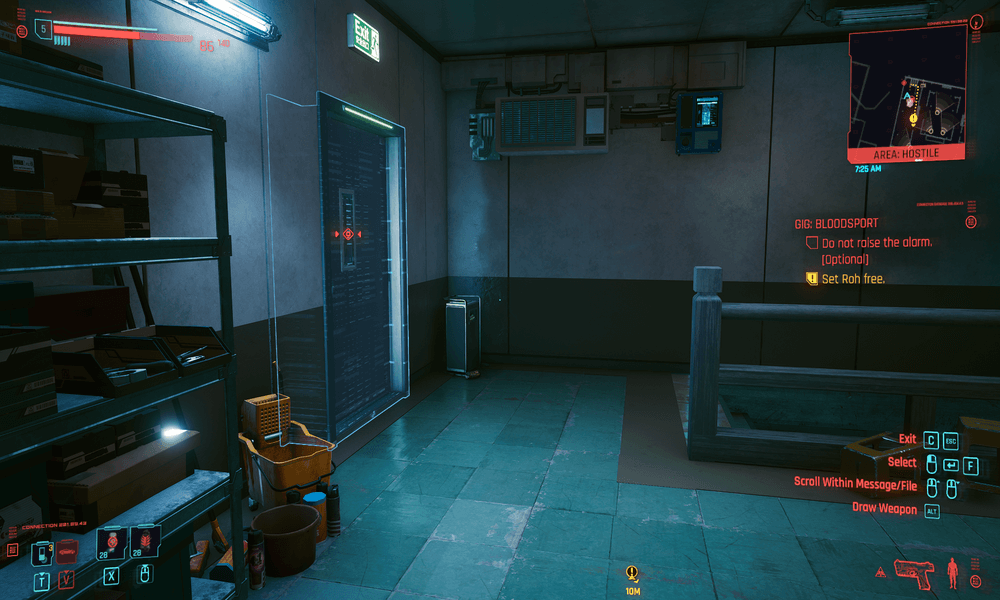 When you reach the room shown above, either from the two side entrances or by taking the long way around, you will need to head to the basement entrance. You can access the basement by going down the steps on the right in the image above. Down the steps there will be a door; open the door and sneak inside. Past the door there will be one enemy and one camera past the door, so you will need to disable and take out both before proceeding any further. 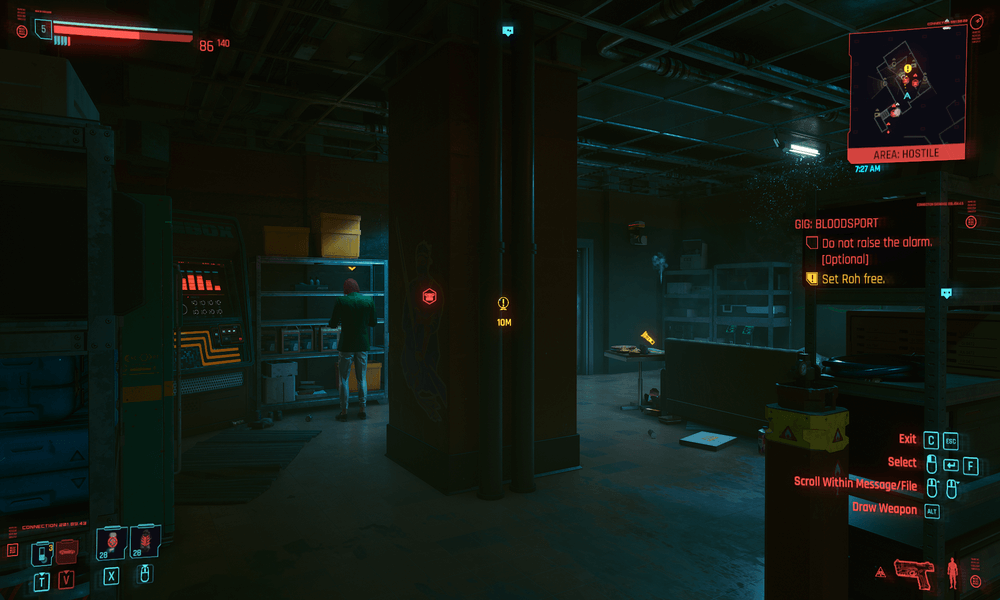 Start by taking out the camera, and you can do this the same way as last time; hold down the hack button and select the option to turn off the camera. Once the camera is disabled, move to take down the enemy silently; after this, you can then proceed to the room where Roh is being held. 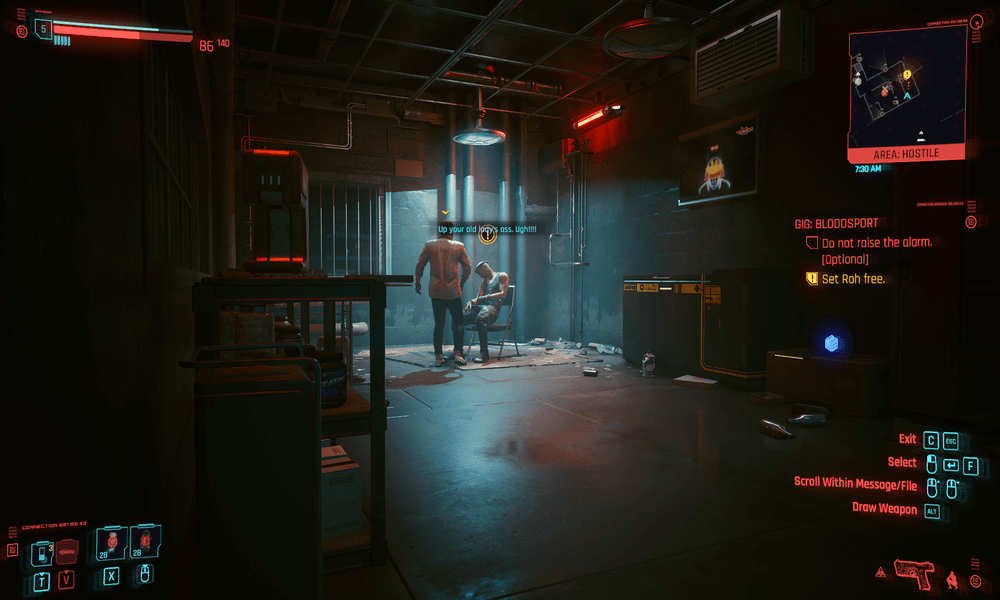 Take the Tiger claw out and then talk to roh; after some dialogue, you can then escort Roh back the way you came out of the dojo compound. After leaving the compound, you will need to escort Roh to a car that Regina will text is waiting for him. But Roh instead will sit on a nearby bench where you can engage in some dialogue. 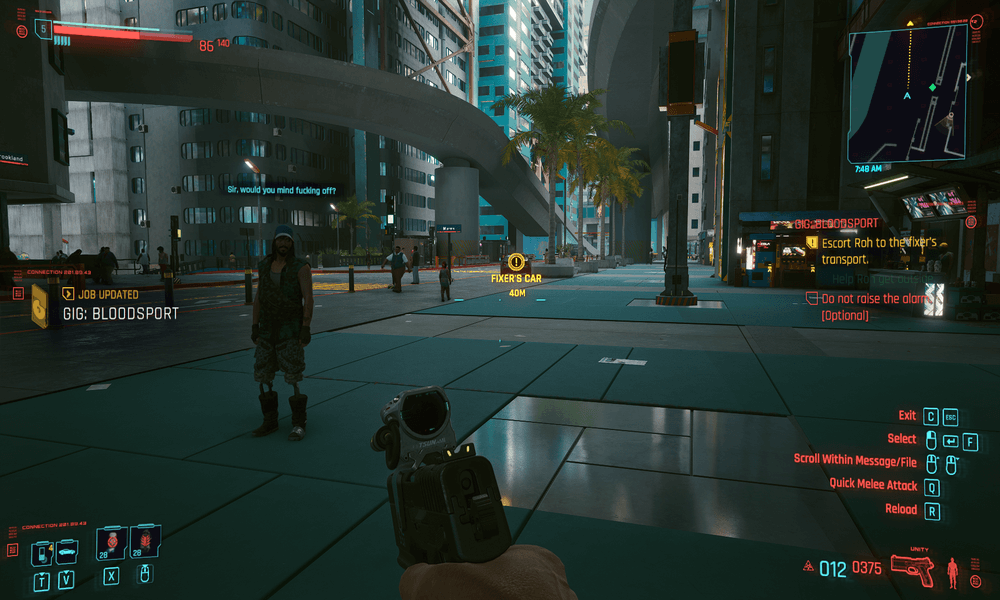 When you get done talking to him, Regina will call you, and you will complete all of the objectives. If you manage to get him out without setting off the alarm, she will text you about a bonus that you can get from the nearest dropbox, as shown below. 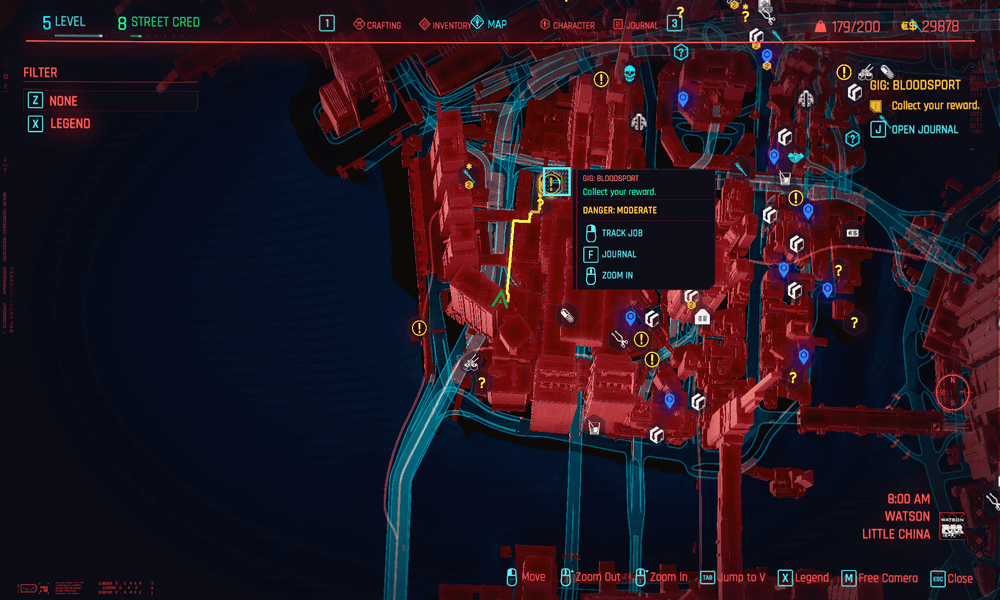 When you get your reward, that will be everything and the quest will be completed for you. However, before leaving to do something else you can instead, go back and kill all of the remaining tiger claws inside the dojo; be sure to also loot all of the rooms as some will contain pretty decent items and gear.

For more on Cyberpunk, PGG has you covered. Come on down today for guides on nearly everything in the game and more on the way. To start you off, we recommend checking out both the how to farm money and how to upgrade weapons guides.