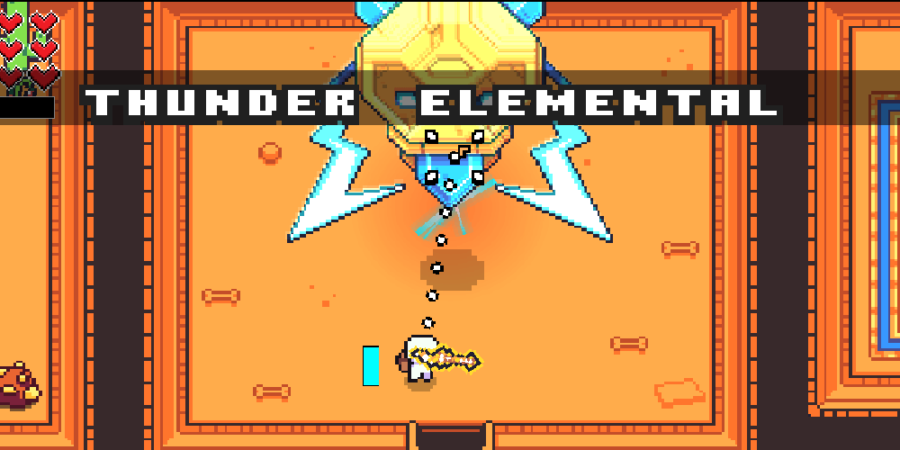 There are four Dungeons in Forager, each associated with a different biome. The Ancient Tomb is one of these dungeons. In it, we must manipulate battery blocks to open paths and obtain the mythical Thunder Rod!

How to Solve the Ancient Tomb Puzzle in Forager

In this guide, we're going to explain how to get to the Boss at the end of the puzzle. When you finish the dungeon, we recommend returning at some point to uncover the hidden paths and chests. You can do that once you obtain the Thunder Rod within the Ancient Tomb.

Before we begin, we will note: there is a boss battle at the end of this dungeon. If you haven't already prepared, we strongly recommend you get the best weapon upgrades available and make sure you have plenty of food to heal. Bring health potions if you can craft them. The boss can be difficult if you're not well-equipped. 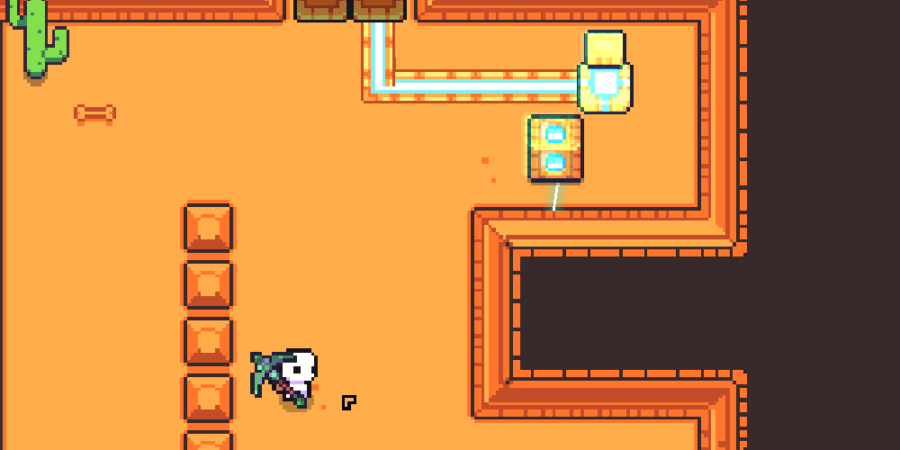 We start off in a room with a power block and a battery. As you approach the battery, you'll find that you can press the action button to interact with it and pull it towards you. However, if you go around to the other side of it and strike it with your pickaxe, it'll move a significantly larger distance away from you. This is the fastest way to move the batteries. The first thing you need to do is shown in the image above. Move the battery next to the power block to unblock the path. 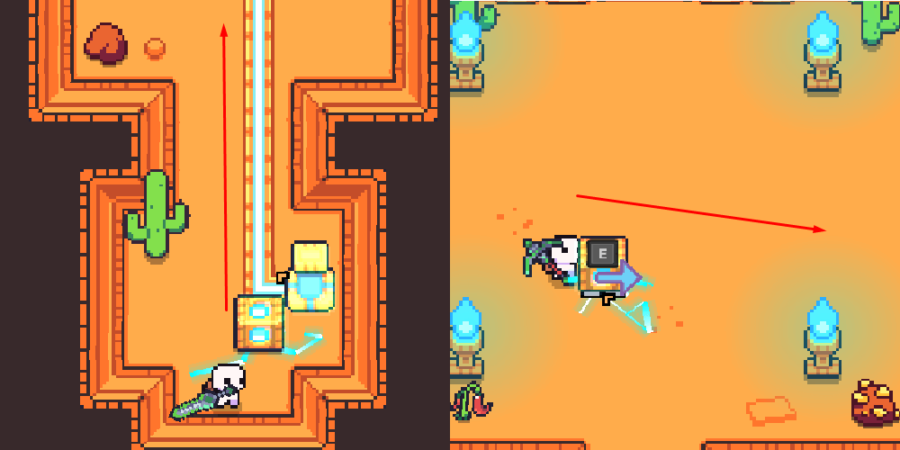 In the next room, you'll find that there is an open door on either end, and a locked door on the top wall. Proceed through the left door and begin making your way down. You'll be met with a few slow, ranged enemies. Take them out and keep moving down until you find the battery shown in the image above on the left. Begin knocking the battery up and through the open door on the right. Ignore the power block for now.

Once you knock the battery back into the main room, continue hitting it across into the open door on the right wall. You will face two enemies that are circling the room. You can take these enemies down, but it is difficult with weak swords. Whether or not you take them down, continue hitting the battery across this small room into the next 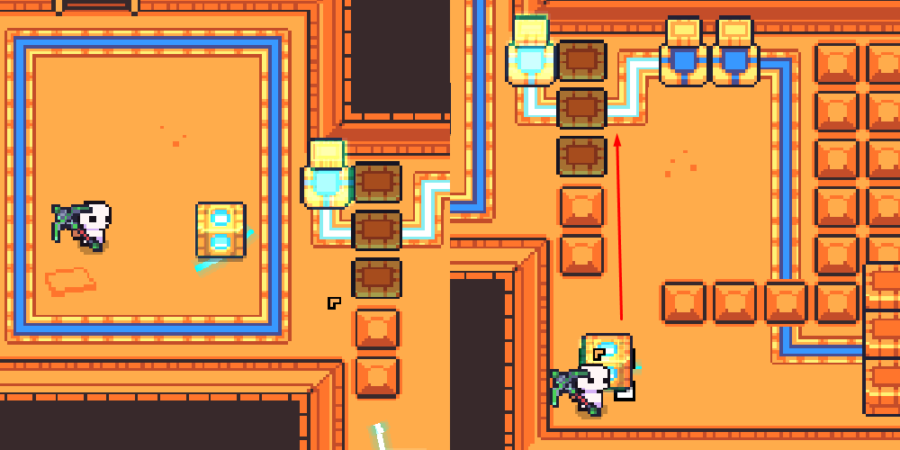 When you finally open the next path, you'll find another battery was hiding in the room behind it. This is where you're going to reverse gears a bit. Approach the new battery and drag it back through the doorway that you just opened. You're now going to bring both batteries back through the main room! 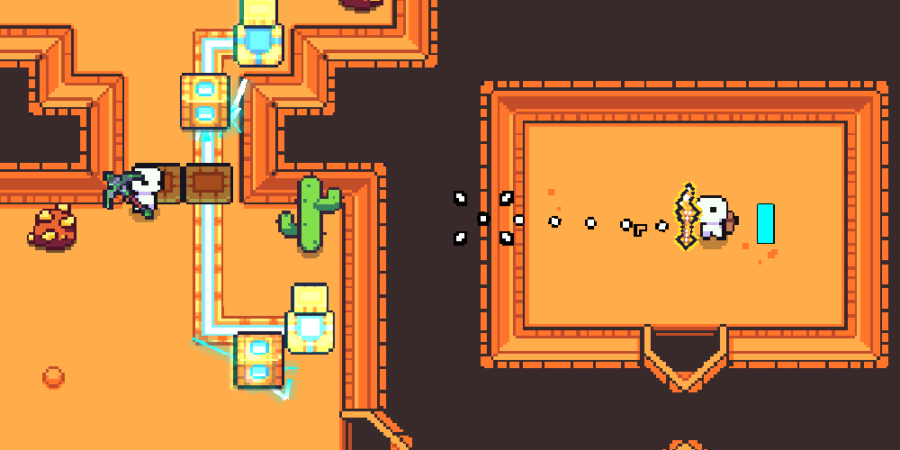 When you open this door, you'll find a Thunder Rod! The Thunder Rod acts as a power source to anything that can be powered up and also does consistent damage if you have it targeted on an enemy. Take the Thunder Rod and begin moving the batteries back, yet again, across the Main Room. 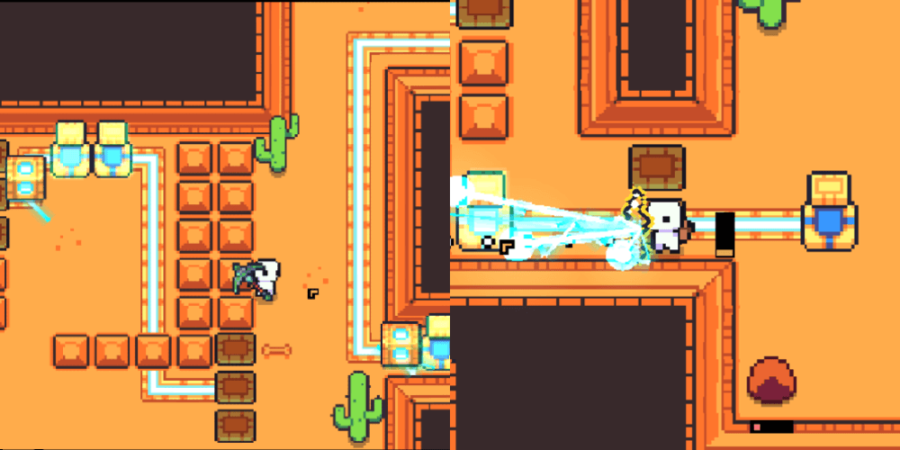 Bring the batteries all the way back to where you found the last one. Open the path here and bring a battery through. Put it next to the power block on the other side that keeps the path open, then bring the first battery through. Do the same thing with the next path. Once you've done this, you'll find that you can't frog jump the batteries again. Now is the time to use your Thunder Rod! Shock the next power block with your Thunder Rod and walk through the path.

The path will close when you stop using the Rod, but you'll be able to go back through since there is a power source on the other side of the entrance. Before you do that, though, proceed through this area into the small room. Use the Thunder Rod on the power block and proceed to the back of the small room to get the Skeleton Key. This key is the necessary tool to open the locked door in the main room!

Use your Thunder Rod to return. You will not need to bring the batteries back with you, so you can leave them as you haul the key back to the Main Room. Once you're there, check your inventory. Make sure you are well equipped and have materials to fill your Stamina bar and any lost Health. You're now about to battle.

The Thunder Elemental is the boss of this dungeon. He attacks slowly, but you need to watch out for when he moves. When he pauses and shakes for a few moments, he is getting ready to dash. His dash attacks can cause pretty heavy damage! He will also deal shocking damage and drop enemies around the room that all have their sights set on you.

Usually it's pretty easy to disperse the memory, but you'll want to do that as they appear. The quickest way to lose this battle is by allowing them to accumulate too much and cause yourself to become overwhelmed. When you defeat the Thunder Elemental, you still need to take out his minions, as they do not de-spawn when it's gone.

Once the room is clear, you'll be able to open the Big Chest that the Thunder Elemental drops. As a reward, you'll receive the Ancient Seal and a Spirit Orb.

Did you know that we also have instructions for other dungeons? Check out our guide on How to Solve the Skull Maze in Forager!

All Secret Room Locations in Forager

How to Solve the Crystal Cave Puzzle in Forager

How to Unlock All Skills in Forager

How to Solve the Graveyard Biome Skull Braziers Puzzle in Forager

How to Solve the Graveyard Biome Dark Bells Puzzle in Forager

How to Solve the Graveyard Biome Colored Pedestal Puzzle in Forager