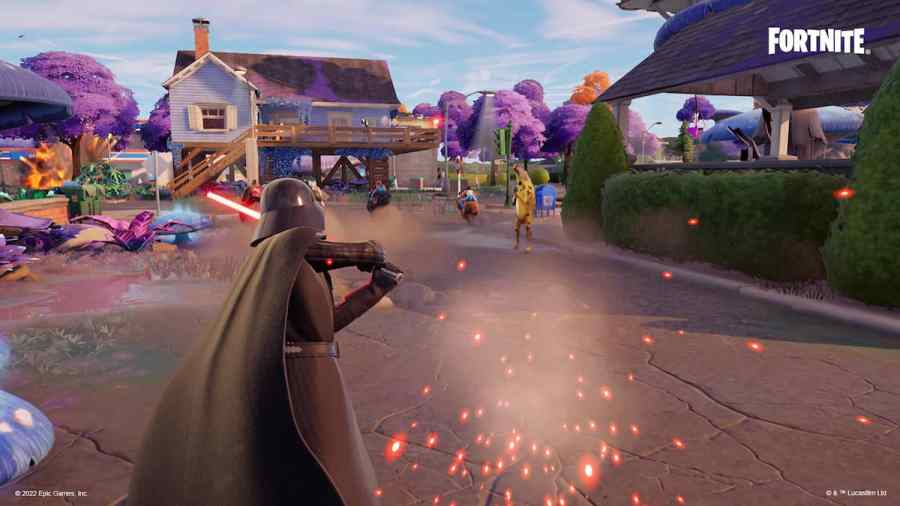 Whether you are tired of the same old Battle Royale experience, or you are looking to practice your game in a simulated environment, we have a list of the best Fortnite Creative Map Codes for you and your Squad! These maps feature a huge variety of things you can do whether it's practicing your aim or just have fun with your friends in a less competitive situation.

Epic has done a great job expanding the scope of the game of Fortnite. While the mainstay is still Battle Royale, you can now play many different game modes in Creative. This gives you plenty more to do when you play. Epic looks to be growing this part of the game more and more, which has enabled players to flex their creativity in a variety of ways.

We pick the best maps based on their popularity within the Fortnite community, the design quality, and any unique features that make the game special. Since Creative mode is ever-changing, we will provide regular updates to this list so you have plenty of new games to enjoy and different game modes with which you can experiment!

Gangster Paradise 2 is the second version of the popular roleplaying Fortnite server where players can dawn the role of a cop or robber. After undertaking a role, users can embark on several missions and challenges involving both parties with various dynamics. Some of these involve bank robbery scenarios, chasing quests, and selling items on the black market. The main highlight of the server is that it has a saving feature, allowing you to continue your journey from your previous checkpoint instead of repeating everything from the beginning.

Have you ever wondered how fun it would be to play soccer using the physics of Unreal Engine? Well, this map by Bonnie brings that concept into reality by allowing players to play the traditional soccer game with the help of a giant ball. Players can divide themselves into teams of four and use their body/pick axe to send the ball flying into their opponent's post. If you are a fan of FIFA or even Rocket League, you should check out the Hammer Ball code room with your friends.

Bedwars are currently one of the most trending game modes in the gaming universe. Every popular game like Minecraft and GTA 5 has incorporated the game mode into its core game in the form of a map room. Fortnite is not different, as the new Medival Melee Bedwars map brings the same exciting game mode with a theme-based twist. The map allows five to seven solo players to protect their beds using melee weapons. It is an exciting game map and should be a part of your custom room code list if you are a fan of the Bedwars game mode.

As the name suggests, Poppy Playtime Series is a recreation of the famous horror puzzle game Poppy inside the Fortnite universe. Similar to the original game, the series has various creative riddles underneath a horror-driven storyline that players need to solve using equipment and accessories at their disposal. The other best part of the room is that the puzzles scale perfectly in difficulty as you progress along the main questline instead of throwing hard challenges from the start. We highly recommend giving it a try if you love scary or puzzle-style games.

Have you ever thought of window shopping products inside any video game? Well, the LG Healthy Home map room fulfills that dream by allowing you to view and use most LG products inside Fortnite. Along with virtual shopping, the map room also provides a point-and-capture shooter game mode. The only twist is that accessories required for fighting will drop from the LG line of products. For example, if you want some Chug Splash to increase your shield meter, you need to find and use the LG Washing Machine. It's a unique and well-thought-out concept that deserves everyone's appreciation.

Racing with the in-game cars or bikes has always been a fun side activity in Fortnite. The developer Kalel has taken this little fun activity and turned it into the core theme of his latest map Ghost Desert Race 4D. As the name indicates, it is a racing game mode that allows you to race against eight players using any vehicle in a desert-like environment. Also, instead of using the default timer-based system found in other Fortnite racing games, the Ghost Desert Race 4D follows a unique round-wise format which makes the gameplay more engaging from others.

This map combines a variety of game mechanics, and the result is a game that serves to fulfill any type of gaming mood you might have. As a popular Boxfight and Zone Wars map, it doesn't matter if you're playing for the excitement, to improve your skills, or for a fun couple of hours eliminating your friends. In this popular map, you fight through round after round of intense close-quarters combat! Best of all, it's one of the most popular box fight maps, so you're not likely to join an empty game.

Build Fight maps rarely get better than Pandvil's Build Fights. This map has been featured on our list of Best Build Fights Maps as a Vanilla-esque take on the genre. It includes all the helpful things you might want on an Edit map but doesn't overwhelm you with too much content. It helps that this is one of the most popular Build Fights maps out there, so you'll always have someone to play against!

Percy's Edit World works as an all-encompassing Edit Map for players who want to hone their editing skills in a myriad of scenarios. It's unlikely for you to get bored and seek out other Edit maps, as there are multiple levels for you to master, regardless of your skill level! Noob or Pro, you'll find a way to improve here.

This Gun Game focuses on high-intensity instant reactions and is definitely a fast-paced take on the Gun Game genre. If you don't have impeccable reaction times and aren't quick on the trigger, you likely won't make it far. Still, even for the majority of us who don't make it to the last gun, you'll find plenty of fun when you jump into the fray of One Shot Gun Game.

Snipers vs Runners Dollhouse looked like it was going to be a one-hit wonder when it was initially released, but it now stands as one of the most-played Snipers vs Runners maps of all time. Despite its simple design, it has been updated to include new and fun features that keep fans of the genre coming back for more!

Horror stories rarely end after the first part, and we're thankful that VHS Project followed the trend. This terrifying take on the horror map genre is regarded by many players as one of the most mind-bending and surreal scary maps available. It's recommended you play this game with headphones on and in a dark room if you want to add to the atmosphere.