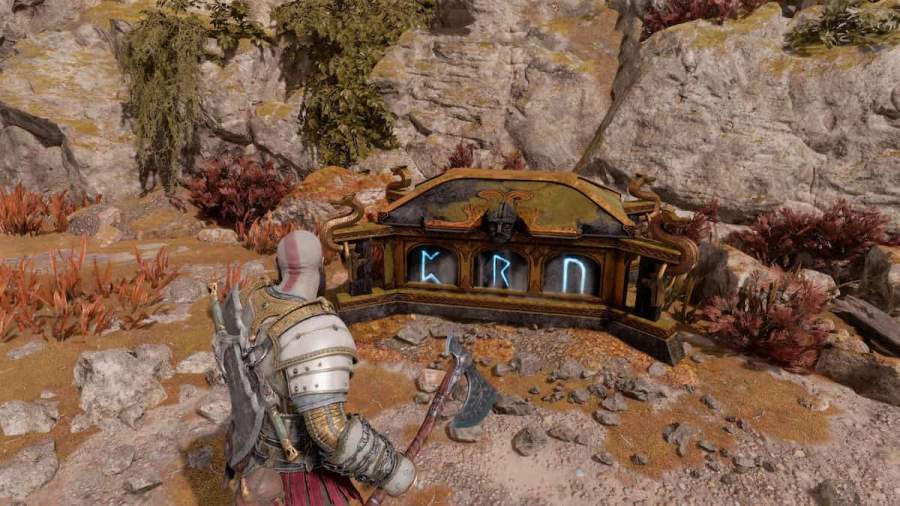 God of War is full of difficult puzzles for players to complete, with the most confusing among them being Nornir Chests. These chests can sometimes require players to perform speed trials, solve complex puzzles, or simply hunt down the keys to open them. The Nornir Chest on Alberich Island can be especially difficult to complete due to its strenuous time limit.

The first Bell is the easiest to spot, as it is located directly above the chest. The puzzle is deceivingly simple at this point, but don't worry, it gets more complicated.

You can find the second Bell by turning around when facing the first Bell and looking slightly to the right. The Bell itself is blocked behind a metal grate. Players can access the key by throwing Kratos' Leviathan Axe at the wooden panel pictured above. This will cause the Bell to rise, allowing players to hit it quickly before descending back to its original location.

The third Bell will also require some extra steps. Like the second Bell, this one is located behind a metal grate. This time, players need to have Atreus shoot the soundstone shown in the picture above, causing the Bell to lower a bit, giving players a clear shot.

This puzzle is timed, so there is an ideal strategy for the whole thing. Players should start with Bell #2 since it requires the most effort and concentration to hit, moving to Bell #3, and finally onto Bell #1. If players complete the puzzle in this order, they should find success after a few tries at most.

Where to find Odin's Ravens on Alberich Island

It will take quite a few steps to reach the first of Odin's Ravens on Alberich Island. Before heading there, make sure to have first completed the Forging Destiny main story quest, which unlocks a necessary weapon called the Draupnir Spear. With this tool in hand, walk up to the location shown in the image above and press the L2 Button to aim and R1 Button to launch it at the wall.

The Spear will stay there, allowing Kratos to jump up to the platform above. Look out for a wall of Soundstone (green metallic rocks), and use Sonic Arrows to reveal the Raven flying nearby.

Where to find the Legendary Chest on Alberich Island

To find the Legendary Chest on Alberich Island, follow the steps to reaching Odin's Ravens in this area. From the Second Raven, walk around the corner to the right and destroy another rock with the Draupnir Spear to reveal a cog. Tug on the chain pulley nearby to lower a cage underneath the waterwheel.