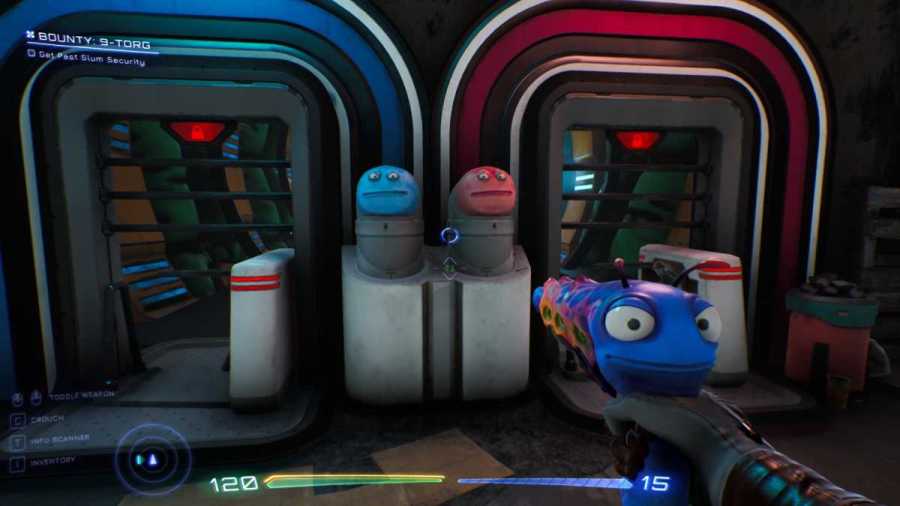 The first bounty you get in High on Life will ask you to head to The Slums. However, before you get there, you'll be met with a pair of guards positioned in front of the entryway. One is blue, and one is red, and each one is guarding the entryway of its respective color. When you approach, you will be asked to settle a debate between the two of them: which one is the hottest? You'll be provided with a choice between the red guard, the blue guard, or two forms of not answering the question. Unfortunately, you have the answer if you want to proceed. So, which guard s the hottest in High on Life?

Which guard is the hottest in High on Life?

The two guards won't give you much to go on besides their looks and general personalities with each other. Considering that they both look identical, you'll have to decide according to your preference. If you choose the red guard, he will be ecstatic and claim that he isn't normally chosen for anything. Especially when it's between him and the blue guard. He will then open his entryway so that you can enter The Slums and collect the bounty on 9-Torg.

If you choose the blue guard, he will mock the red guard and claim his superiority. He will then open his entryway so that you can enter The Slums. Realistically, it doesn't matter which one you choose because they will both lead you to the same location.

Which entryway to The Slums should you pick in High on Life?