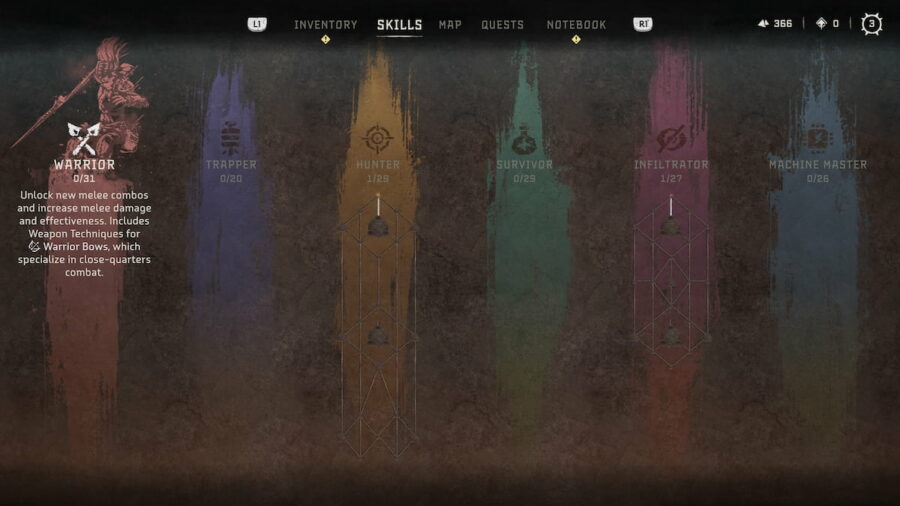 The Resonator Blast is an active skill, meaning that it doesn't require the player to charge up their Valor points to activate it. This will require stamina, but nothing else. For Resonator Blast, players need to strike an enemy with melee attacks to build up energy in Aloy's spear.

Once the spear is charged, players can tap R2 to energize the target. This will appear on the enemy as a blue disc. Switch to any of Aloy's bows and shoot the enemy where the blue disc appears to deal extra damage to them.

This active skill is required by the early Melee Pit challenges and is quite useful in close combat against human enemies. Use the combination, R1 + R1 + R2 to break an enemy's block. This will leave them open to an extra attack.

Another active ability that is needed for the Melee Pits. Nora Warrior is a combo that allows Aloy to knock her small opponents down. Her larger opponents will become staggered instead. The combo is R1 + R1 + R1 + R2.

The first of the Valor Surge abilities within the Warrior skill tree. This ability has three levels. Each level will increase Aloy's Critical Hit Chance, Critical Hit Damage, and Critical Strike Damage by a decent amount for a short period of time. In order to unlock this ability, players will need to grab all of the connecting skills within the tree.

This active skill is two abilities in one. Jump-off is an ability that allows Aloy to jump off of an enemy to create distance between them. While mid-air she can use her bow to deal extra damage. To do press R1 and hold R2.

Aerial Slash alternatively allows Aloy to jump in the air at any time and use her bow to deal extra damage. To activate it, aim at an enemy with any bow while in mid-air. Then press the R1 instead of R2 to fire the special ability off.

This weapon technique shoots three arrows at once in a quick burst. In order to do this, make sure it is currently equipped. Then players can simply hit R1 to fire with the Warrior Bow type instead of R2.

This weapon technique, specific to the Warrior Bow, allows Aloy to shoot five arrows at once in a widespread. For a tighter grouping of arrows, simply hold the shot longer, until the reticle changes. As with the other weapon techniques, in order to activate this ability, it must be equipped. Then players simply use the R1 instead of the R2 to fire the bow while aiming.

This weapon technique gives Aloy the ability to fire a special arrow with a Warrior Bow that attaches to an enemy. Once attached, players will have to detonate the arrow with melee attacks. The more of these special arrows that can be attached and detonated at once, the stronger the explosion will be. However, there is a time limit to the arrows.

Much like with other special bow abilities, players simply need to fire with R1 instead of R2.

Halfmoon Slash is another active skill required for mid-tier Melee Pits. This attack acts as a short charge. It can quickly close gaps between Aloy and her target, allowing her to be more accurate with her attacks. It can also be used alternatively to a dodge in a pinch.

The second Valor Surge ability within the Warrior skill tree. Much like the previous one, it has three tiers that add to Aloy's base melee damage for a short period of time. At the first level, it will double her melee damage.

This active skill allows Aloy to deal a powerful spin attack against all surrounding enemies in melee range. In order to pull it off, she will need to complete a combo. The combo is R1 + R1 + pause + R1 + R1.

Energy Surge is another active skill that allows Aloy to deliver a final strike. The combo is R1 + R1 + R1 + pause + R1.

The first of the special abilities within the Trapper skill tree is a Valor Surge. This one is the Elemental Fury surge. After activating, Aloy will gain a boost to her Elemental Buildup, Elemental State Duration, and Elemental Damage Resistance for a short period of time. This will make all elemental weapons and traps deal more damage.

The next special ability is a weapon technique for the Ropecaster. This will allow the ropecaster to attach to any part of an enemy without needing to fully draw the weapon. To use, simply aim and hit the R1 to fire.

This is a weapon technique that affects all tripcasters. Instead of having to perfectly aim both ends of a tripwire so that it doesn't tear, Aloy can use the Quick Wire technique to throw one out automatically.

The last of the special abilities within this small skill tree is another Valor Surge. Trap Specialist gives Aloy an increase to her Trap and Tripwire Damage, Trap and Tripwire Elemental Buildup, and Trap and Tripwire Knockdown Power. This will only be in effect for a short period of time, however, the more levels a player has in it, the higher the percentages will be.

Spread Blast is a Boltblaster weapon technique. This technique allows players to fire eight bolts at once in a widespread.

High Volley is a weapon technique available for all Hunter Bows. This technique will cause a hail of arrows to rain from above.

Ranged Master is a Valor Surge ability that will bolster Aloy's Ranged Weapon Damage, Health Recovery per Hit, Weapon Technique Damage, and Weapon Stamina Regen. There are three levels to this that will add to the increased percentages.

A Boltblaster weapon technique that will unleash an entire clip of bolts while standing still.

A Hunter Bow weapon technique that allows Aloy to load up to three arrows at once.

Powershots is a Valor Surge ability that will grant Aloy an increased Ranged Damage and a limited number of Powershots for a short period of time.

Ultra Shot is another Boltblaster weapon technique. This one will shoot special explosive bolts that hit targets far away.

Another Hunter Bow weapon technique that allows Aloy to fire special arrows that only stagger or knockdown enemies.

Triple Shredder is a Shredder Gauntlet weapon technique that launches three shredders at once.

Bouncing Bomb is a Blastsling weapon technique that allows Aloy to bounce a bomb up to three times. Each time it bounces it will deal more damage.

Toughened is a Valor Surge ability that causes Aloy to Heal a certain amount every two seconds and gain a percentage of melee damage resistance.

Burst Dodge is a Blastsling weapon technique that allows Aloy to throw bombs out in front of her while dodging backward.

Shredder Mine is a Shredder Gauntlet weapon technique that sends off a shredder gauntlet that ricochets and turns into a shock mine for a short period of time.

Overshield is a Valor Surge ability that creates a shield around Aloy. Each level will give the Shield more health.

Power Shredder is a Shredder Gauntlet weapon technique that launches a special shredder that deals extra damage and does not return.

Sticky Bomb is a Blastsling weapon technique that launches a bomb that sticks to its target.

Stealth Stalker is a Valor Surge that will make Aloy nearly invisible for a short period of time and cause her to deal twice the amount of damage against unaware targets.

Braced Shot is the Sharpshot Bow weapon technique that causes Aloy to shoot an extremely damaging shot by dropping to one knee.

Double Notch is a Sharpshot Bow weapon technique that allows Aloy the ability to load an additional arrow.

Focused Shot is a Sharpshot Bow weapon technique that increases the zoom and firepower while aiming.

Radial Blast is a Valor Surge ability that attaches an overcharged module to Aloy's spear creating a giant shock AOE blast based around her.

Related: How to upgrade the Tripwire Pouch in Horizon Forbidden West?

Propelled Spike is a Spike Thrower weapon technique that allows Aloy to throw her spikes a further distance that explodes on impact.

Spike Trap is a Spike Thrower weapon technique that allows Aloy to throw down spikes to become traps. These are not included in the trap/tripwire limit, so they can add to this.

Splitting Spike is a Spike Thrower weapon technique that causes Aloy's spikes to split mid-air to damage enemies in a large area.

Chain Burst is a Valor Surge ability that causes Aloy to disperse the same damage from one target on to all surrounding similar targets.