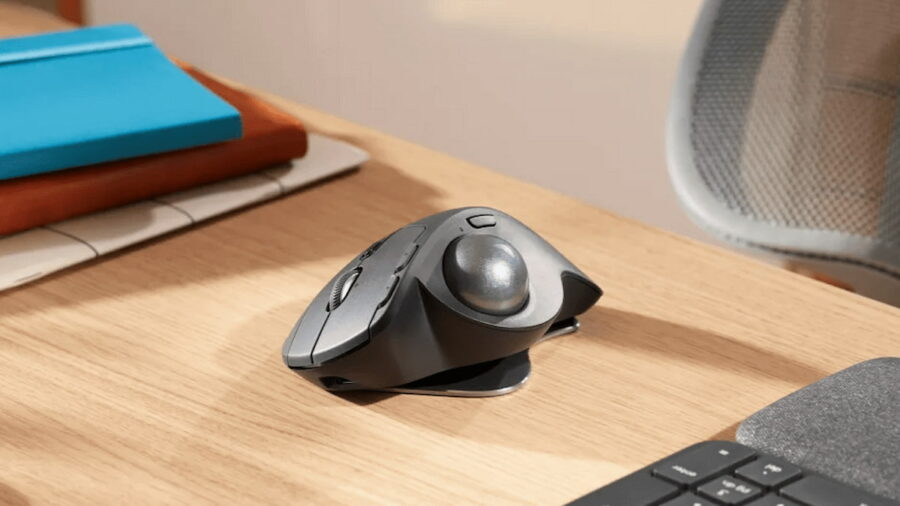 Trackball mice have been around for quite a while. For many years they were treated as a viable alternative to the traditional mouse and often preferred by many. But as time rolled on, they became less common until now; they're mostly relegated to their own specific niche in the PC accessory market.

Trackball mice require less space since they don't move around your desk, provide better ergonomics, and can be as precise as traditional mice with little practice.

First up, we have the Logitech MX Ergo Wireless Trackball, which is honestly the gold standard as far as thumb trackball mice are concerned. It's dual-mode, meaning both 2.4 GHz via a dongle and Bluetooth are supported and feature an adjustable tilt of up to 20 degrees for ergonomic comfort. The battery, rated at 70 hours, is rechargeable with the Micro USB port on the front and can be used regularly during charging.

It also has a DPI clutch for quickly switching the trackball speed, which is super useful for gaming purposes. The productivity side of things also offers a copy-and-paste function between computers by storing small enough files within the mouse's memory. The maximum DPI is 2048, which is a tad low for gaming but should get the job done just fine for all but the fastest of titles.

Related: How to Turn Off Mouse Acceleration (Windows)

The Logitech Ergo M575 is a slightly less robust thumb trackball compared to the MX Trackball but still provides a solid—and much more affordable—trackball experience. It features the same ergonomic grip, dual-mode wireless (2.4 GHz or Bluetooth), and swaps the rechargeable battery for a single AA with a reported battery life of 24 months.

The biggest omission in gaming is the lack of a clutch compared to the MX Trackball, but at half the price, it's still a very solid and usable thumb trackball mouse. It also comes in off-white, which looks very striking when paired with the blue trackball.

Outside of Logitech, the other big name you'll see in the trackball game is Kensington Technology. Their Pro Fit Ergo Vertical is an interesting combination of the vertical mouse and thumb trackball designs and also packs in both 2.4 GHz wireless and Bluetooth.

The included Bluetooth functionality also has two separate modes so that the mouse can be paired separately to two different devices without having to re-pair when you want to switch. The ball itself also uses a more recessed design compared to the Logitech thumb trackballs, which could reduce thumb strain for those of you who tend to hyper-extend your thumb.

This rather unassuming-looking trackball is stoic in both form and functionality, but it's a rock-solid design that will hold up well even with extensive use. The base has an ergonomic curve that fits in your palm and a large center-mounted trackball for easy control. You'll find four buttons in a nested formation on the sides, which makes for easy thumb and pinky presses.

A solid, no-frills trackball is sometimes all you need. The biggest omission here is the lack of a scroll wheel, which could put some gamers off of this mouse, but it's an easy fix if you're comfortable mapping one of the four buttons to scroll functionality using software such as X-Mouse Button Control.

The Kensington Expert is a radically different design than the Trackman but still maintains the same center ball ergonomics. It sports a detachable wrist rest, four separated buttons, 2.4 GHz wireless, Bluetooth. It also works with Kensington's very nice KensingtonWorks Software for customizing shortcuts, cursor speed, and other functions. It comes in a wired version for those of you who don't want to deal with batteries. The ring around the trackball serves as a scroll wheel.

Finally, we have the Kensington Orbit, another traditional trackball that uses the same scroll ring design as the Expert (not shocking since Kensington owns a patent on the technology). Like the other Kensington mice listed here, it's compatible with their customization software and offers dual 2.4GHz and Bluetooth wireless modes. The DPI here is a little low at a maximum of 1600 DPI but should suffice for anything outside of the fastest games since trackballs allow you to flick the ball for faster movement. Like the Expert, it also comes in a wired variant and multiple color variations.

Whether you have specific accessibility-related needs, are battling a repetitive stress injury, or happen to like trackballs, they are a viable solution for any gamer. Their unique designs often require software tweaking to dial things in exactly where you might want them, but a trackball can provide hour after hour of enjoyable, ergonomic PC gaming with ease.

For more hardware recommendations check out Best Keyboard and Mouse for the PS5 and Best M1 Pro and M1 Max Mouse on Pro Game Guides.