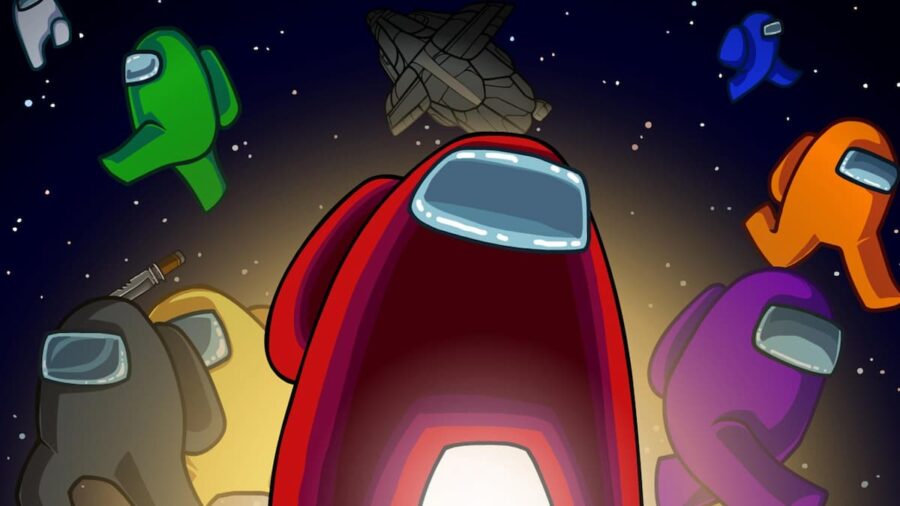 Getting together with friends and playing some games is always a great time, but sometimes things can get in the way of making that happen. That's okay! Despite your busy schedules or location, there are plenty of games you can play online together, no matter the distance. Whether you have a PC, a console, or simply just your phone, here are some games that will make it party time, all the time.

Among Us is the ultimate multiplayer game of betrayal. Play up to 15 players online as you attempt to prepare your spaceship for lift-off. However, an Imposter is among you and will do everything they can to sabotage the plans, including murder. As you complete tasks, you and your crewmates must sus out the Imposter successfully and look out for any knives ready to stab you in the back.

In this Minecraft experience, join up to four players in a party and venture into various dungeons. You must take on waves of dangerous mobs, traverse a hazardous path, and figure out puzzles to complete the missions. Gear up your characters with multiple rarity loot drops and prepare to face the big bosses to save the endangered villages.

Available on: Xbox, PlayStation, and PC

Overcooked is a chaotic four-player cooking game where you must work together to prepare orders for crowds of customers. It won't be an easy task! This game requires top-notch cooperation and coordination to complete orders with different obstacles thrown in your way. Each level will increase the difficulty and test your teamwork abilities.

If you've heard of Hello Neighbor, this multiplayer horror game Secret Neighbor is the perfect game for you and your friends. Play up to six friends at a time as you delve into your creepy Neighbor's house, searching for keys to unlock doors in an attempt to rescue your missing friend. However, the twist is that one of the friends is secretly the Neighbor in disguise! Can you successfully save your friend before the Neighbor catches you?

Using live streaming, you and your friends can play up to five people in the ultimate party game experience. Jackbox Party Pack includes several of the best hilarious games to play with friends, such as trivia, bluffing, and drawing. Each player joins a room with a given room code and uses their mobile device as a controller to fill in the blanks or complete a prompt. This game is guaranteed to have you all in fits of laughter

Rec Room is a massive online party platform with so many game choices that will keep you and your friends entertained for hours. Play dictionary, various sports games, paintball, freeze tag, and more! You can style your character in unique customers and interact with your friends and other online players through controllable emotes and actions. Try it in VR, and it will feel like you are side by side with your friends.

Mario Party Superstars is a fun board game and minigame collection that you can play with your friends, up to four players at a time. Play as your favorite Mario characters and challenge your friends to the classic Mario Party board game of collecting stars on various maps. You will go head to head in only the best Mario minigame challenges, stretching back to the Nintendo 64 games.

Compete in a last-man-standing battle against three other flimsy friends in Gang Beasts. This battle game allows you to dress up as silly characters and attempt to win the round by knocking out your competitors. However, these characters can squirm and wiggle in unnatural ways, making it a wrestle to knock them out. You will have to get creative with your punches, headbutts, and dropkicks in this humorous experience.

Get physical in this motion sports game, with plenty of nostalgia from previous Wii sports. This time, you can play online with friends of up to four players in games like Volleyball, Soccer, Tennis, Bowling, and more. You can customize your character, unlock new items by completing sports, and use cute emotes to interact with fellow players.

Available on: Xbox, PC, and PlayStation

Rubber Bandits, much like Gang Beasts, is another multiplayer physics-based game that you can play up to four players online. Choose to compete in a Heist game mode, where you must steal the money and escape, or simply an all-out battle with various deadly weapons. Get creative as you throw objects and fight your wiggly friends to get the victory.

Minecraft is already one of the most popular survival and crafting games available on multiple platforms, making it one of the best games to play with friends. You can join five to eight fellow Minecrafters online and work together to find materials, build up an epic base, and take on the mobs as the sun sets. There are endless possibilities you can build together!

Play online soccer with your friends in a whole new way with this hybrid racing and sports game. You can play up to four players as you control vehicles and attempt to beat your competitors in a soccer match unlike ever before. Utilize boost, learn new tricks, and score a goal by knocking the giant ball into the goal with your speeding car.

Join your friends in an online battle showdown as legendary characters from various titles such as Mario, Zelda, Pokemon, and more! Each character has unique abilities to take down your enemies when utilized in powerful combos. With so many items, rules, and locations to choose from, you can always discover new ways to battle your friends in a friendly competition.

In another silly physics-based game, you and your friends work together to complete puzzles and navigate your way through intricate obstacles to achieve a mission. You can use your wobbly bodies to climb, lift things, and even pull each other up from a ledge. It will require some teamwork but is guaranteed to be a fun and humorous time.

This whimsical cooking game is the perfect party game to play with friends on VR. You must work together to cook food and prepare orders for hordes of impatient fairytale creatures. Beware of maniacal jesters and beasts who seek to sabotage your orders. This is a silly and chaotic game of teamwork cooking with a twist.

Much like Super Smash Bros, Brawlhalla is a battle arena game in 2D. Play with up to eight friends as you select various unique characters and use their special abilities to fight each other. You must adequately utilize your abilities in combos if you hope to take down your competitors and be the last warrior standing.

Available on: Android, and iOS

Play the classic game of Pictionary with your friends straight from your mobile device with Draw Something. You or your friend will choose a word to depict with a drawing and then create that piece of art for the other to guess. The guesser will be able to choose from an array of letters revealed to them and spell out the proper word to gain a point.

Animal Crossing quickly became one of the most popular games with its adorable characters and the grind to discover and build up your island. It also happens to be a great game to play with friends! Online friends can travel to your island and adventure with you as you find materials and craft more accessories for your home. Show off your styled character and home with up to eight friends at a time!

Roblox is the perfect game to play friends online because there are endless experiences of all different genres and themes to discover, from horror, shooters, roleplaying, and more. You can also team up with your friends to create your own experience, build a map, and test out Roblox's game studio. This is a game that you will not tire of for hours.

Take control of clumsy characters and compete with your friends in chaotic obstacle course races and other silly minigames in this physics-based game, Fall Guys: Ultimate Knockout. This is an excellent game of laughs you can play with four friends where all rules go out the window. Do what you can to get ahead of the competition by hopping over obstacles and shoving past your fellow racers.

Related: When is the next Fall Guys season? Dates, leaks, skins & more!

Rocket League: Sideswipe is a great mobile alternative for Rocket League that allows you to team up with a friend in a 2v2 online match, whether casual or competitive. Earn unique rewards in a whole separate mobile battlepass and work your way up the ranks in this thrilling car soccer experience.

Experience the fantastic racing adventure of Mario Kart right from your fingertips in this mobile game, Mario Kart Tour. You can get all the Mario Kart features you love anytime you want and hop in with friends. Race on recognizable Mario Kart maps or in real-life landmark cities!

Stardew Valley is a fascinating pixel multiplayer game where you can build up your farm, grow a garden, and adventure the map searching for helpful tools and materials. You can join up with your friends in a four-person party and work together to run a successful farm and defeat mobs located in the caves nearby.

If you and your friends enjoy a more horrifying experience, Dead by Daylight is the perfect party game for you. Play up to five players at a time in a 4v1 thrilling online game. Your friends will become your enemies as one player gets selected as the killer, and the rest of the friends must attempt to survive the night by hiding or running from them.

QuizUp is another fun game to play with friends on mobile. You can compete head to head with a friend in round-based trivia on various topics. Choose from a large array of themes from educational to entertainment, such as hit TV shows and video games. This is a simple but fun time to test your and your friend's knowledge of random facts!

Looking for more Pro Game Guides best games content? Check out our lists of Best games to play when you’re short on time or Best games that support Ray Tracing!