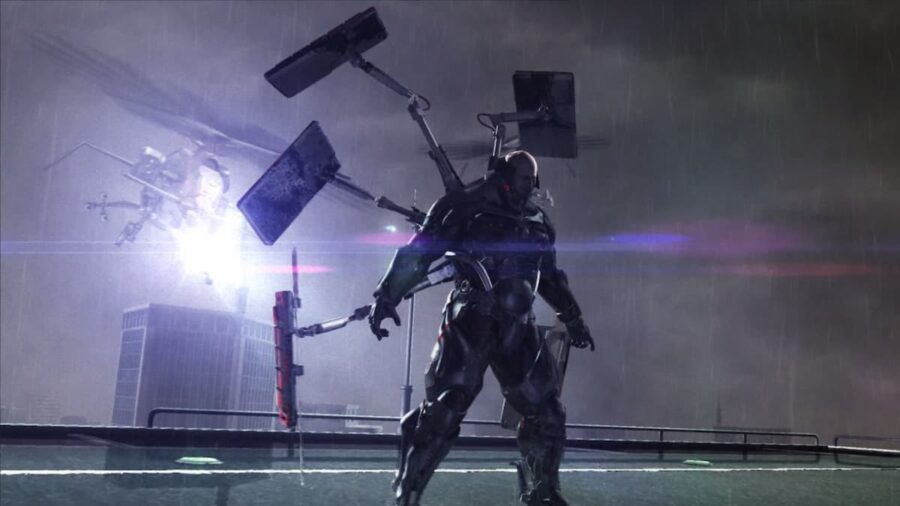 Since Sundowner appeared in the first story cutscene and killed the Prime Minister, he's had a target on his back. At the end of Mission R-04: Hostile Takeover, we finally get to fight the warmonger himself. Armed with defensive plates and a helicopter that provides overwatch, Sundowner can be an intimidating boss to face. However, he is not impossible. Here's how you beat Sundowner's fight in Metal Gear Rising: Revengeance.

Before you begin the fight, don't forget to equip a Surface-to-Air Homing Missile in your consumable slot. If you forget, you will have to re-equip it at the beginning of each attempt, which can get tedious. Due to his single gimmick, Sundowner is one of the simpler bosses, but he is excellent at punishing mistakes.

His primary move is his plate block, where he throws up his defensive plates and causes any attacks against them to explode Raiden. This move is annoying at first, but it is easy to counter. When Sundowner throws up his plates, activate Blade Mode and slice the indicated portions.

There is also a helicopter that sabotages your lock-on feature and fires missiles at you. When it flies behind Sundowner, your attacks will lock on to it, forcing you to either avoid locking on altogether or position yourself between Sundowner and the helicopter. If you possess homing missiles, however, these are an efficient way of defeating the helicopter for a short time. It will respawn, so be prepared.

Right off the bat, Sundowner will lunge at you, prompting a QTE if you parry the attack. The game will prompt Blade Mode and highlight the robotic arms that mount his plates if executed successfully. If you slice these arms without hitting the red plates themselves, those plates will be destroyed for the duration of the fight.

When he goes into a defensive position and raises his explosive plates, you can activate Blade Mode and carefully slice across the plates, allowing you to cut the mounted arms. If you do strike the plates, they will explode and damage Raiden, throwing him backward.

Sundowner's most dangerous attack is indicated by a yellow glow. This attack cannot be parried and must either be jumped over or outrun. If caught, Sundowner will repeatedly stab you and deal massive damage.

Once you cut off every plate, leaving Sundowner defenseless, the fight will progress to Phase Two. Alternatively, if you want to avoid Phase Two, you can avoid slicing off all plates and instead focus on inflicting damage. If you kill him purely by inflicting damage, Phase Two will not occur.

Once Sundowner has no more defensive plates, he shifts to Phase Two. In this phase, he will focus less on defense and more on offense. He will use another attack where he glows yellow and cannot be parried. To avoid this attack, jump when he's about to activate it. After some time, Sundowner will jump to a nearby platform and send out smaller enemies. These can be used to regain your health with Zandatsu.

Once you kill these enemies, he will grab the pole and sweep it toward you. You can parry this attack, and if parried twice, the pole falls apart. This attack functions similarly to Monsoon's ball of debris. You can also run up to Sundowner and strike his back during this attack. Once Sundowner reaches 10% health, there is a short flying section.

This flying section is fairly self-explanatory since the only real mechanic is avoiding obstacles and progressing through the tunnel. At the end of the tunnel, the game will prompt Blade Mode. When Sundowner fires missiles at you, there will be a QTE, and if it succeeds, congratulations. You have now beaten Sundowner.