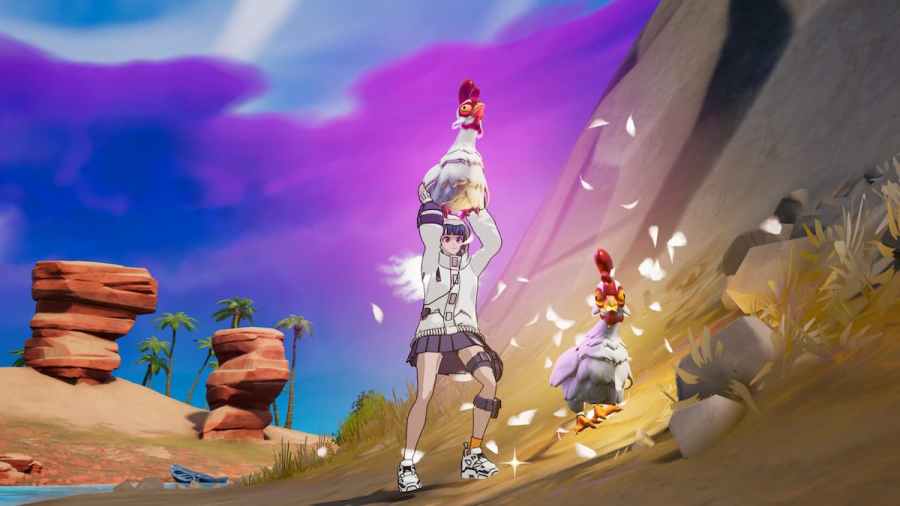 Fortnite is one of the best battle royales to play with the whole family, with fresh updates and new exciting challenges constantly being revolved into the game, including themed challenges in their unique events. In Avian Ambush week, you get to utilize the silly chicken creatures that roam the map and complete various tasks with them to earn some extra XP and levels toward the battlepass. You can even use a chicken to deal damage to your enemies. Here's how!

As you can see from the map below, there are plenty of chickens around that will work for your Avian challenges. However, they tend to roam around, and it might take a little bit to catch them. They are found in greater abundance toward the desert biome and around some named locations.

While you can find them spread around the wild, you will have a greater chance of locating them in some of these marked areas. You might want to drop in any of the following spots for a quick run and grab as the match starts:

How to deal damage with a chicken peck in Fortnite

Once you locate a chicken, you'll have to pick it up. This can be a bit of a challenge since these chickens will run away from you as fast as they can. Run beside it, and once the option pops up, press the button to pick them up:

Now that you have the chicken in your possession, your jumps will allow you to fall back to the ground slowly, and if done correctly, you can also damage other players or animals that try to attack you. You will have to be close range to do this successfully since the chicken can only peck what is directly in front of its beak. Approach your target, and aim the chicken toward them. Whatever you do, don't let go of the chicken. The chicken will automatically peck at any opposing force directly in front of it.

You'll have to get a few pecks in for the challenge to be completed. The easiest target to use is other animals that are attacking you, such as a boar or wolf, or even another chicken. The chicken doesn't peck too quickly, so attempting to do this on enemy players might be a bit harder. Completing this challenge for the Avian Ambush can boost up your XP and help you earn some levels before the season change.

Check out our other Pro Game Guides Fortnite guides for more assistance, such as Best spots to Launch into air using Launch Pads in Fortnite or Where to find FireFly Jars in Fortnite?

How to deal damage with a chicken peck in Fortnite