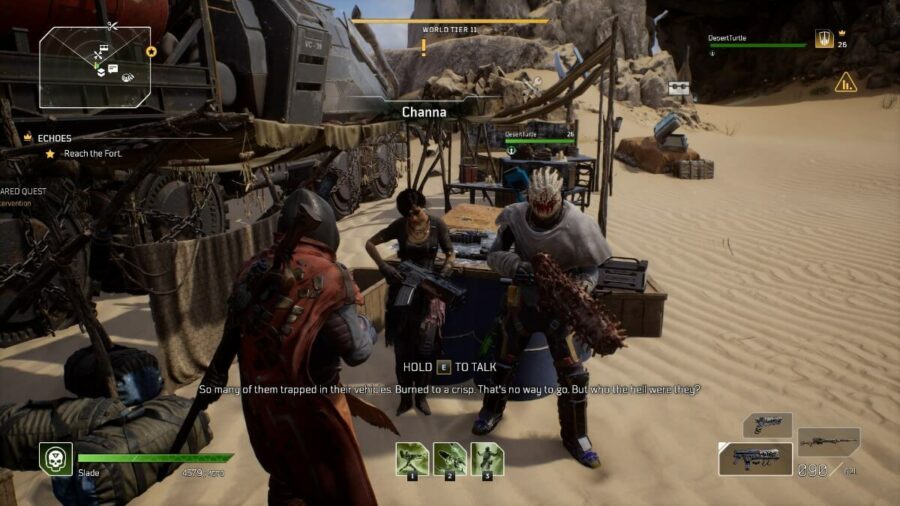 If you haven't received a legendary weapon yet, the quest Big Iron is one of a few quests with a guaranteed drop for one, so here's how to complete it.

Related: How to beat the Chrysaloid boss in Outriders

That said, grab the quest from Channa and then proceed to the fort location by following the objective waypoints. At some point, mid-way to the fort, you will encounter some enemies, kill them and continue to where you need to enter a tank, as shown below.

Use your interaction key to enter the tank, and you will blow an opening into the fort - after this, proceed inside, and upon entering, you will need to fight some more enemies.

After a fight, you will need to clear a blockade to proceed to the next part of the area, but before you do, check the building shown and marked with a red arrow below for a chest.

Once you grab the chest, proceed to the next area by destroying the blockade, as shown below. However, be sure to check the building to the right as you can find a chest inside it - hopefully, it will contain something good!

Related: How to Dismantle Weapons and Armor in Outriders

In this next area, you will need to fend off multiple waves of enemies, so be prepared. But once you are done with this next part, you will be able to start the big iron quest via the entrance below.

Once in the Big Iron area, you will need to continue on until you reach a cave entrance, as shown below.

When you enter the cave, continue on until you reach an area, as shown below.

In the cave above, marked by the red arrow, is the first weapon part you need to collect, grab it and continue on through to the next area.

After another wave of enemies, you will be able to find the next weapon part as shown below in the cave to the left, however, be sure to check the cave to the right for a chest. Once grabbed the weapon part, you will need to proceed to a point where there is a village full of ferals again.

At this point, you will need to fight numerous hordes of ferals until you reach a point, as shown by the image above. Up a set of stairs where the red arrow is pointing will be the final part you need to complete the quest Big Iron.

That being said, grab the last part, and you will be able to get a choice of one out of three legendaries upon turning it into channa back at camp.

For more on Outriders, we recommend checking out both Are Outriders Servers Down? Here’s how to check server status and How to fix lag and stuttering issues in Outriders PC.