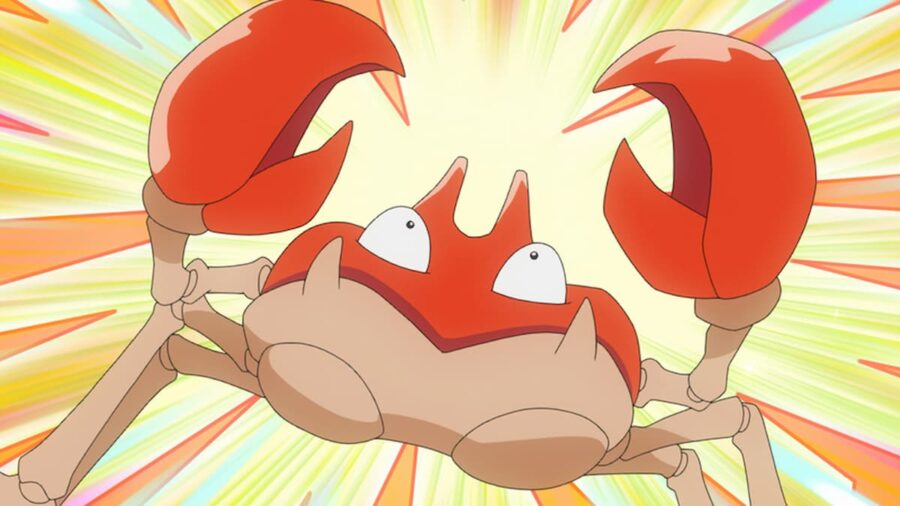 The Pokémon series has run for many years and featured numerous entries in the mainline. Many of these games introduce new regions, characters, and Pokémon. One type of Pokémon that has been consistently added is crab Pokémon. With so many crab-based Pokémon, you may wonder which is the best crab Pokémon.

There are many different crab Pokémon throughout the series. From the humble Krabby to the new Klawf, crab Pokémon have found their place among the huge roster of Pokémon. Below you can find all 14 crab Pokémon ranked.

Crabominable is a unique take on the crab Pokémon, ditching the traditional Water-type for Fighting and Ice-type. While it boasts phenomenal offensive stats, its awful speed and Ice-typing leave it open to strong attacks. Its design combines the appearance of a crab with aspects of a yeti or abominable snowman. As a result, Crabominable is covered in thick white fur and trades its claws for powerful fists fitting its Fighting-type.

Corphish comes in somewhere between a crab and a lobster and plays as the more defensive option to Carvanha. It sticks to the classic red look that Krabby started for crab Pokémon in Gen I but puts a spin on it with the lobster aspects. Corphish can hold its own in battle, but Carvanha and its evolution Sharpedo seem to be the better choice, leaving this crab lobster hybrid lacking.

When it comes to crab Pokémon, Water-type is very common, so Clauncher has some tough competition when it comes to Water-type crab Pokémon. But its Mega Launcher ability allows it to take opponents by surprise by powering up sphere and pulse moves. It has a pleasing design of bright blue with some blacks and yellow, changing things from the traditional red crab in the Krabby and Corphish lines.

Crabrawler is the pre-evolution for Crabominable when it was young and not yet covered in thick fur. With its Johnny Bravo haircut and bright blue boxing gloves, this crab Pokémon had a bright future until The Pokémon Company shackled its evolution with the Ice-type and reduced its speed. Still, Crawbrawer's pure Fighting-type and Iron Fist ability allow this crustacean to pack quite a punch, especially at early levels.

More akin to a cicada nymph, Paras sneaks into this list with its crab-like appearance. While the critter is adorable, a dark fate awaits it due to the fungus growing on its back. While its Bug and Grass-type combination leaves it weak to Fire and Flying-type attacks, Paras and Parasect were a hot commodity because only Bug was super effective to Psychic in Gen I. Sadly, its use and viability have dropped off, but its unique aspect still makes its line a stand out one.

This horseshoe crab fossil carries the Water-type crab Pokémon are known for but also has the Rock-type, making it more defensive but extremely weak against Grass-type Pokémon. Kabuto is fairly weak, especially considering how late you receive this Pokémon in Gen I and how long it takes to evolve. And while Kabutops is an incredible Pokémon, it loses its horseshoe crab aesthetic to become an apex predator shellfish Pokémon.

Related: Who is Grusha in Pokémon Scarlet and Violet?

Dwebble may be Bug-type, but its hermit crab aesthetic leaves no doubt it belongs on this list. It also has the Rock-type, which goes a long way to mitigating some Bug-type weaknesses. Combine this with its high attack and defense stats to make Dwebble a good early choice for your team. This is further enhanced when Dwebble evolves into Crustle, but at level 34, this milestone takes some time, and you may feel Dwebble falling behind. However, the night is darkest before dawn, and hermit crabs are nocturnal, so stick with this little one until it evolves.

Crawdaunt, and its more speedy counterpart Sharpedo, take place for the first Water and Dark-type Pokémon. It continues the crab and lobster aesthetic with a darker touch, perhaps hinting at the offensive and defensive powerhouse it can be. Unfortunately, it lacks speed, so it may not get to use its heavy-hitting attacks, but Crawdaunt's potential and unique design make it a crab worth considering.

While the Pokémon series is full of disturbing and terrifying Pokédex entries, few are as sad and twisted as Parasect. The crab vessel of this Bug Pokémon is nothing more than a lifeless shell meant to spread the parasitic spore on its back. While Parasect's design and backstory are heartbreakingly cool, it does suffer from its dual weakness to Fire and Flying-type Pokémon and generally poor stats. Still, it can find a niche in its decent attack and ability to inflict its opponents with a variety of status conditions.

This right-arm dominant crab packs a powerful punch—or rather a powerful blast. Clawitzer's Mega Launcher and high special attack make any pulse or sphere move extremely deadly. Combine this with its overall good remaining stats, and Clawitzer is a great crab Pokémon. It carries on Clauncher's design but adds a more sinister aesthetic that looks like it would have picked up the Dark-type on evolution. But this is not the case, and Clawitzer remains pure Water, allowing it to avoid picking up additional weaknesses.

Related: What is the final Sprigatito evolution in Pokémon Scarlet and Violet?

Kingler deserves the title of King of the Crabs when it comes to crab Pokémon. With an incredible attack score and hidden ability, Sheer Force, Crabhammer has never hit so hard. While Kingler's special stats and HP are lacking, this crab hits like a ton of bricks and boasts a great defense as well. It and its pre-evolution Krabby started the crab Pokémon line along with crab Pokémon being Water-type. Finally, Kingler's design is simple but classic regarding crab Pokémon.

Crustle not only features a great design; after all, it is a hermit crab living inside stone, but it has phenomenal attack and defense as well. This makes the Bug and Rock-type Pokémon an offensive powerhouse that can take some hits. Combine this with its wide move pool, and Crustle can take on many different foes. Its abysmal speed does hold Crustle back, but with the right setup, this hermit crab can shred through your opponent's team.

Klawf has become an icon on the internet after being revealed in a trailer for Pokémon Scarlet and Violet. This crab's design is nothing short of exceptional from its goofy smirk, suspicious eyes, and comical eyebrows. While we don't know much about Klawf at this time, its Rock-type should provide it with strong defensive capabilities. But it will most likely also function as an offensive Pokémon due to its Anger Shell ability, which increases its attack and speed when dropped below half health.

Call it nostalgia or the fact that Krabby started the crab line of Pokémon, but the original crab takes first place for best crab Pokémon. Ash's Krabby showed this Water-type crab's worth in his first-ever battle, being the only Pokémon Ash owned to sweep an entire League match after evolving. In addition to this, Krabby's design is simple, adorable, and iconic when it comes to crab Pokémon. Krabby is a force to be reckoned with early on as it has phenomenal attack and defense for a first-form Pokémon.

For more information on Pokémon, check out All Gym Leaders in Pokémon Scarlet and Violet (So far) and What is Flash Fire in Pokémon? on Pro Game Guides.