The Roblox Egg Hunt event started the same year Roblox launched, way back in 2008. Since then, the Egg Hunt has evolved from single level events to more complex missions spanning across the entire Roblox universe. This year's Egg Hunt will be no different.

Spring 2021 is here, and Robloxians are asking: When is the Roblox Egg Hunt? As of March 30, 2021, Multiple games have confirmed that Egg Hunt begins this Easter Weekend.

Here's a look at the dates for the past three Egg Hunts:

In the meantime, why not grab some free Avatar items from the 8th Annual Bloxy Awards?

Unfortunately, we still don't know this information. Previous Egg Hunts have shown the event to run between anywhere from three to five weeks. This year, we expect Egg Hunt 2021 to last somewhere within a similar timeframe.

What Games will Feature in Egg Hunt 2021?

Tons of developers have applied, only a select few will be chosen. Last year, Bad Business, Build a Boat for Treasure, and Mad City were some of the few to appear in the Agents of E.G.G. 2020 event. We expect many of the same games to take part in this year's Egg Hunt 2021. However, with so many new games added to the Roblox platform since last April, we also expect many new games to play a major role.

*Confirmed indicates that the game developers have tweeted or acknowledged their participation in this year's Egg Hunt.

Which games would you most like to see join Egg Hunt 2021?

The Roblox Egg Hunt 2021 event will be called Into the Metaverse. News of Egg Hunt 2021 first broke in Dec. 2020 when calls were sent to Roblox developers to submit their games for the event. This confirmed two things: 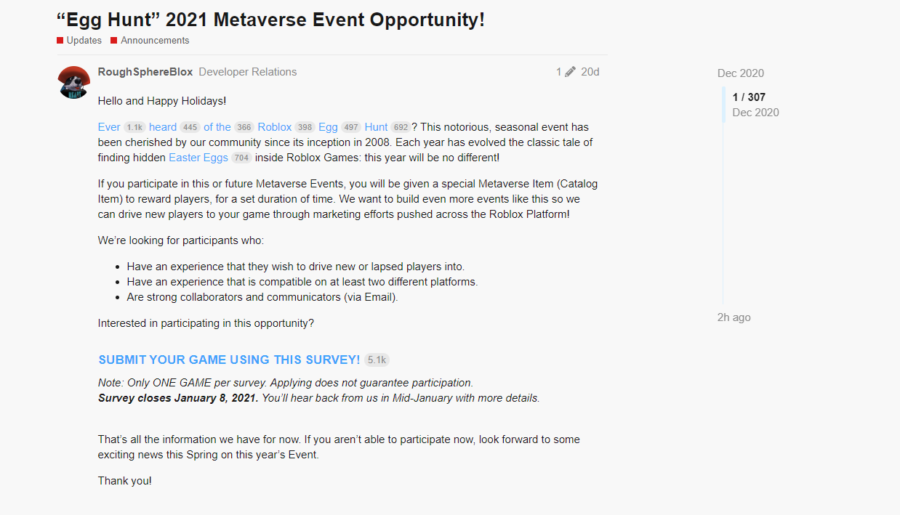 This isn't the first time the "term" Metaverse has floated around the Roblox community. Dave Baszucki, CEO and co-founder, is vocal about the Metaverse, of transforming Roblox into a shared virtual universe where players can share human experiences in a safe, online environment. The 2021 plan of creating real-time human expression on all Roblox avatars is yet another step toward achieving the Metaverse.

While we don't know what Into the Metaverse will entail, we expect the Dev Hunt to unite players across multiple games in ways the game has yet to achieve.

Eggs, and lots of 'em! Except these eggs have special designs and are cosmetic items for your characters. One of the greatest appeals of Roblox events are the cosmetic rewards for your Avatar, and the Egg Hunt doesn't disappoint.

The picture above is just a small example of the type of eggs that have shown up in past Egg Hunt events. It's too early to tell what the new eggs will look like, but chances are you'll be rewarded well.

What is a Dev Hunt?

Dev Hunts are missions made by Roblox developers across a variety of some of the best Roblox experiences that the game offers. Dev Hunts provide Roblox developers with the opportunity to showcase their games to the widest possible Roblox audience, as events are popular among the mass community. Many of the most popular Roblox games show out for the Dev Hunts, but smaller Roblox developers are also welcome to receive some much-deserved recognition, and even create a mission for the event.