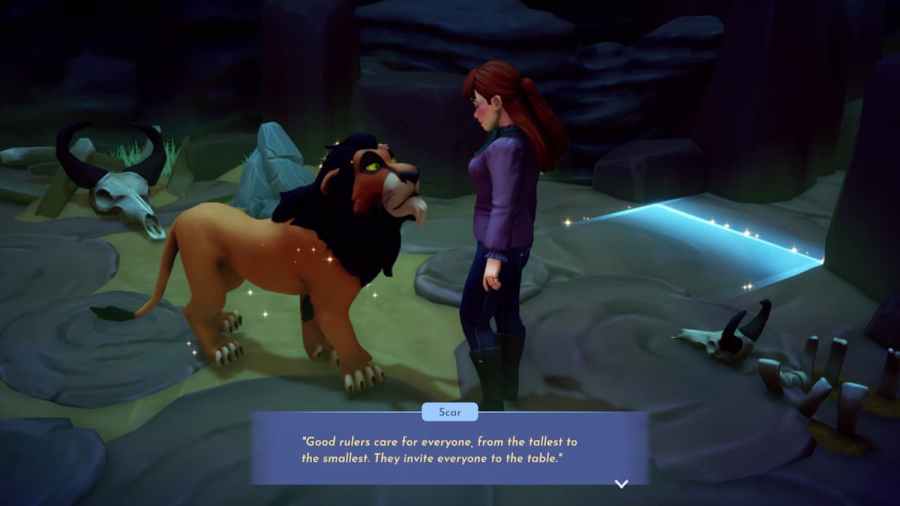 The Making of a Monarch Quest Guide for Disney Dreamlight Valley

Start this quest by talking to Scar, who wants to host a regal feast. He'll give you two recipes to cook: Teriyaki Salmon and Snow White's Gooseberry Pie. Cook them at any cooking station, then meet Scar in his cave, the Elephant Graveyard. Give him the meals, and you'll share them. But wait, Scar says there's more to your dinner than you first thought.

Scar was trying to get back an item you apparently took from him long ago. You were teaching him this lesson: "Good rulers care for everyone, from the tallest to the smallest. They invite everyone to the table." It sounds like an enchantment, so go talk to Merlin about it.

Related: How to get Moonstones in Disney Dreamlight Valley

You'll need to help Scar learn how to be a good ruler of the Sunlit Plateau. Start by building two Sunbird Feeders from the following materials:

Once you've crafted them, use your Furniture Menu to place the Sunbird feeders nearby the pond in the western part of the Sunlit Plateau. Talk to Scar about his life lesson. He'll begrudgingly agree to help feed the Sunbirds. Rather than using the feeders you just crafted, you'll need to feed flowers to the sunbirds in the Sunlit Plateau the old-fashioned way. After you've finished, talk to Scar again. He'll ask you to go back to his cave to see if the enchantment has been broken.

It hasn't, and Scar is a bit miffed about it. But just as he begins to admit defeat, he takes a moment sincerely thank you for trying to help... and the enchantment lifts. Find the Magic Mirror Shard on the ground and return it to Scar. He'll thank you for returning this with a Geyser furniture piece and more Disney Puns.

To unlock The Making of a Monarch, you'll need to raise Scar's friendship level to 10. You'll also need to have unlocked the Forgotten Lands Biome. If you haven't done them already, you'll need to have completed the prior quests in Scar's Questline: Friends Aren't Food, Breaking Bones, and The Circle of Life.