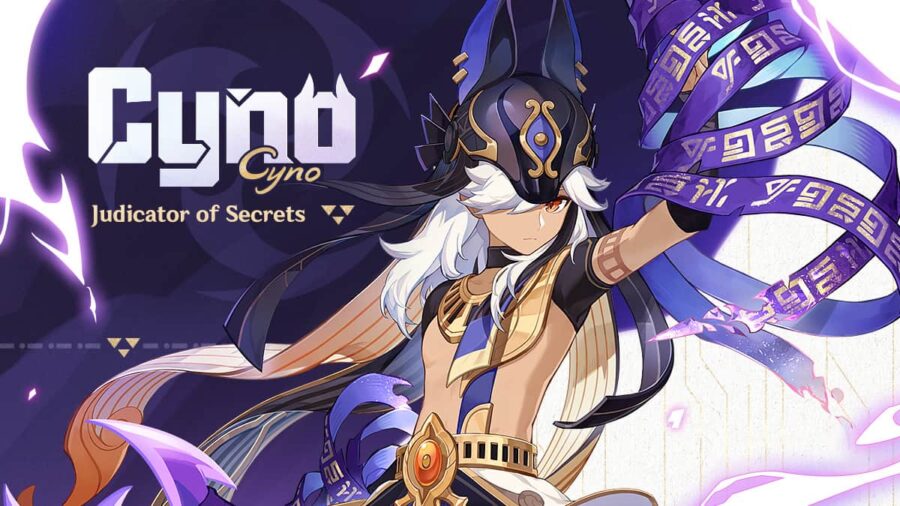 How many Primogems will it cost you to add Cyno from Genshin Impact to your teams?

Seriously though, if you added this horrible joke teller to your roster, but need help figuring out how to build him, don't worry. We've got you covered.

While he shares a lot of similarities with Razor, there is one major difference: Razor hits hardest as a Physical DPS. Cyno will prefer to do elemental damage, so plan for him to be the Main DPS in Aggravate or Hyperbloom team comps. If you were a fan of Razor's "Burst then hack away" playstyle, we've got good news for you. Cyno will want to be in his Elemental Burst state, Pactsworn Pathclearer, as much as possible and will use it to deal wild damage.

Cyno will have a five-star weapon designed just for him, Staff of the Scarlet Sands. All jokes aside about the weapon's looks, it will make Cyno formidable. A CRIT rate sub stat is always nice to have on a weapon, and its Weapon Skill, Heat Haze at Horizon's End, will incentivize players to build up his Elemental Mastery to boost his reaction damage and attack at the same time.

If you don't want to pull on the weapon banner, Cyno can make good use of both Kitain Cross Spear or Moonpiercer. Both are four-star craftable weapons, though crafting Kitain Cross Spear may be easier since you probably have more Northlander Billets ready to go.

When thinking about Main Stats for your artifacts, you can try the traditional Main DPS set up of CRIT / Elemental Damage % / Attack%. However, you will likely get more value out of an Elemental Mastery main stat on your Timepiece Artifact. Try to find CRIT, Attack, and Elemental Mastery substats to boost his damage even more.

What you need to ascend Cyno in Genshin Impact

Other than the standard amounts of Experience Books and Mora, you'll need Vajrada Amethyst pieces, Divining Scrolls, Scarabs, and Thunderclap Fruitcores dropped by the Electro Regisvine to ascend Cyno. We recommended raising him all the way to level 90, as he is a main DPS character and should be a focus for your resources. Raising all of his talents will boost his damage, but prioritize his Elemental Burst first, then his Elemental Skill, then his Normal Attack. You'll need more Mora, Divining Scrolls, Teachings of Admonitions from the Steeple of Ignorance Domain, and Mudra of the Malefic General, which is dropped by the Raiden Shogun weekly boss.

Plan to pair Cyno with mostly Dendro and Electro support units. The Dendro Traveler, Nahida, Fischl, Kuki, or Dori would all be good choices. If you want to mix in some Hydro support characters for a Hyperbloom team comp, try Xingqiu or Kokomi.