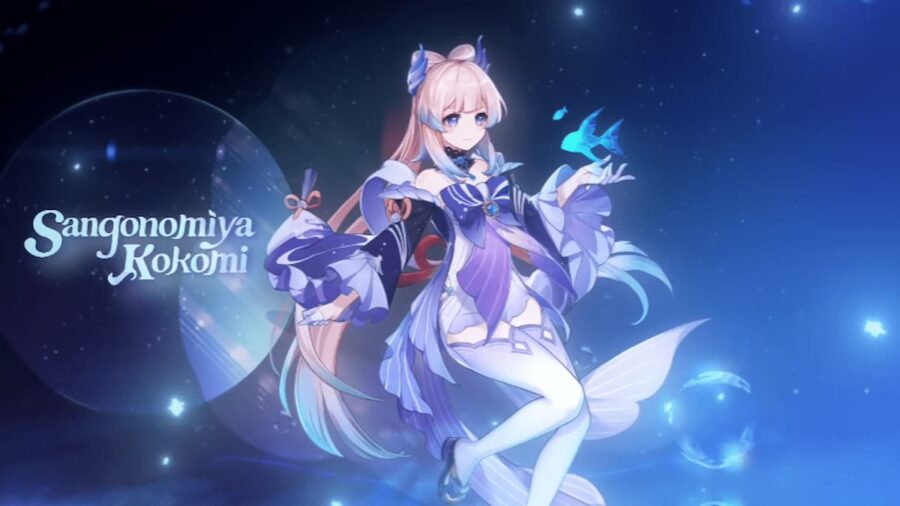 Genshin Impact's ever-expanding roster of characters includes Kokomi, the leader of the Sangonomiya Resistance. She's a five-star, Catalyst-wielding, Hydro character and a skilled tactician. Her kit's main draw is her healing skills, but she also has drawbacks. Here's how we recommend building her.

She was one of the first characters in Genshin Impact designed to be used as an on-field healer, not off-field. She also was the first character introduced to have a starting CRIT rate of -100% rather than 0%, effectively meaning that she can not strike critical hits at all. Due to the potential DPS loss by keeping her on-field, fans widely panned her kit before her release. However, with a new artifact set designed for her, she's become a valuable option on many teams and in co-op play. She can keep everyone healed, apply Hydro, and deal a fair amount of damage simultaneously.

Related: Where to Find Boars and Raw Meat in Genshin Impact

The five-star catalyst Everlasting Moonglow is a weapon designed specifically for Kokomi. Everlasting Moonglow increases Healing Bonus by 10% and increases Normal Attack Damage by 1% of the Max HP of the character who wields it. Also, for 12 seconds after using an Elemental Burst, the character's Normal Attacks that successfully hit opponents will restore 0.6 Energy.

The Thrilling Tales of Dragon Slayers Catalyst can also be used as an easy-to-obtain three-star option to boost the on-field character's attack when switching from Kokomi. Or, if you have the billets to craft it, Prototype Amber works very well to boost Kokomi's HP while providing additional healing and energy to the team.

The Ocean-Hued Clam artifact set was released after her initial banner run. Still, it was clearly designed specifically for Kokomi. The esthetics match and its four-piece bonus allow Kokomi to deal damage in a small AoE around the on-field character every 3.5 seconds, which scales with the amount of healing Kokomi provides, up to 30,000 damage per instance. On a well-built Kokomi, you can almost guarantee that you'll hit this damage cap every 3.5 seconds. Try to get artifact pieces that boost her HP and find a Healing Bonus Circlet.

Normal Attack: The Shape of Water

What you need to ascend Kokomi in Genshin Impact

Aside from the standard amounts of character EXP books and mora, players will need Varunada Lazurite pieces, Spectral husks, Sango Pearls, and Dew of Repudiation, a unique drop from the Hydro Hypostasis. You'll need more mora and spectral husks for her talents, as well as Teachings of Transience and Hellfire Butterflies.

Kokomi is a versatile character that can cover both healing and hydro applications at the same time. You can pair her with characters that need healing, such as Xiao. Since the Bloom reaction cannot strike critical hits, she'll work well in Bloom teams with other Dendro and Hydro characters.