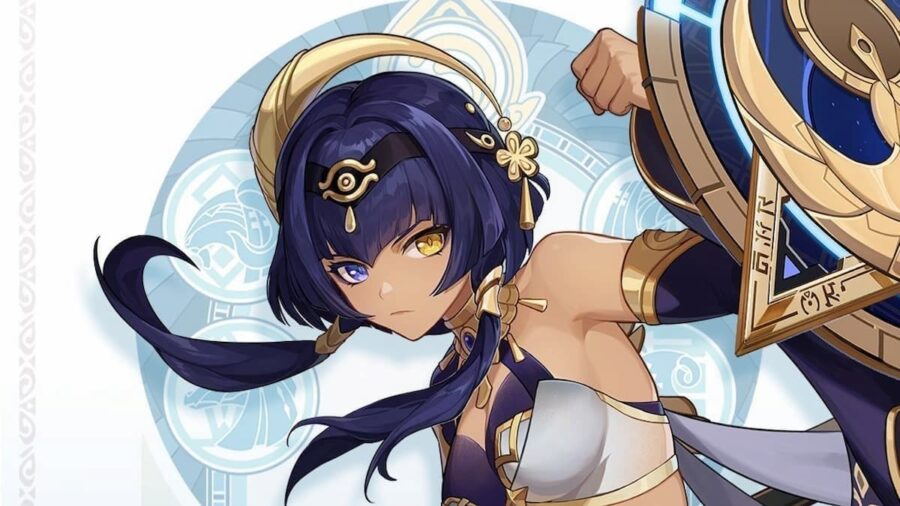 Candace will be the first four-star Hydro character to be introduced in a Genshin Impact update. Both Barbara and Xingqiu were present in the initial release of the game. Naturally, fans are excited for her as a first for the game and a beautifully designed character. We've got some guidance if you've added her to your roster and need help building her.

She appears to be the elemental damage cousin of Yun Jin. She's equipped to be off-field support who quick-swaps in to activate her Elemental Burst, swipe back at an enemy via her Elemental Skill, then let another Main DPS character take over. She doesn't heal or shield (even though she carries one), but she will add a lot of damage to teams that want to use Hydro elemental reactions such as Bloom, Hyperbloom, and Electro-Charge.

You'll really want to take advantage of Candace's Elemental Burst. She may not have the benefit of many other Hydro characters on her teams, so choosing a weapon with an Energy Recharge sub-stat like the Favonius Lance or The Catch would be helpful. Most of Candace's damage scales on her Max HP, so the three-star Black Tassel would also be an easy-to-build option for her.

Related: When exactly does the Genshin Impact home screen change times of day?

Candace doesn't have a four-piece Artifact set designed solely for her. A four-piece Noblesse Oblige set is never a bad choice for support characters. If you want to boost Candace's damage, try two-piece combinations of either Tenacity of the Millelith, Heart of Depth, or Noblesse Oblige.

We recommend an HP% Timepiece, a Hydro Damage % or HP% Goblet, and a CRIT or HP % Circlet. Her sub-stat's can be any form of HP, attack, CRIT, or Energy Recharge. Elemental Mastery would not be as beneficial in this build as she would be applying Hydro to enemies to set up a reaction, not triggering them herself.

What you need to ascend Candace in Genshin Impact

To ascend Candance, you'll need the standard amounts of Experience Books and Mora, Varunada Lazurite pieces, Red Satin pieces, Redcrest fruits, and Light Guiding Tetrahedrons, dropped by the Algorithm of Semi-Intransient Matrix of Overseer Network. Since she scales so heavily on her Max HP, leveling her to 90 would be beneficial.

You'll need more Mora and Red Satin pieces to level up her talents. You'll also need Teachings of Admonition from the Steeple of Ignorance domain and Tears of the Calamitous God from the Raiden Shogun weekly boss.

We recommend prioritizing her Elemental Burst over her Elemental Skill. You can level her normal attacks if you want to, but this would be a much lower priority.

Most Sumeran characters belong in some form of a Dendro reaction-based team. We recommend using her as a support in a Bloom or Hyperbloom team comp. Try her with Dendro, Hydro, and Electro characters such as The Dendro Traveler, Nahida, Nilou, or Cyno. You can also use her in an Electro-Charge team with Fischl, Yae Miko, or Raiden Shogun.