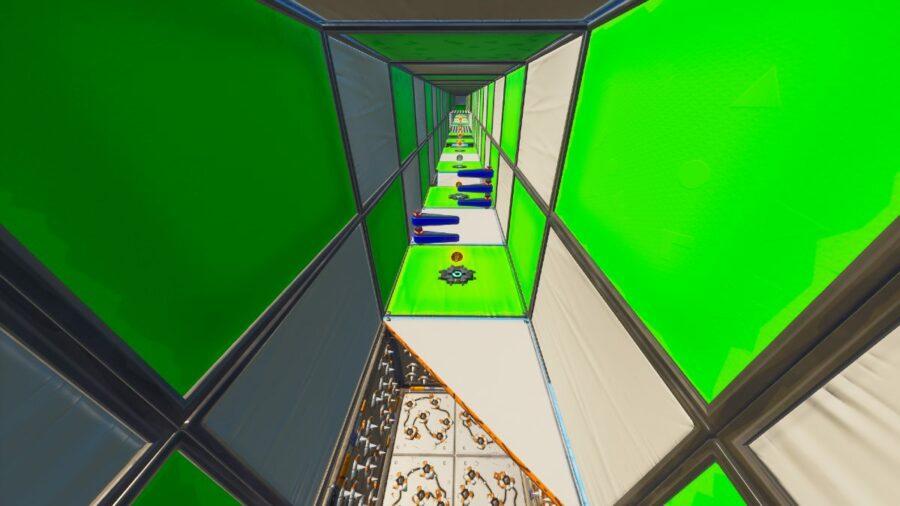 While most Deathrun maps are supposed to be quite difficult, many players want to take it easy and warm up their skills before they start playing extreme maps. Easy deathruns are generally not advertised on the Discovery tab, so we've compiled a list of super easy Deathrun codes that are great if you're a beginner, default, or noob! These maps also feature several basic fundamentals you need to know when trying some of the more difficult deathruns.

Deathruns are one of the most popular creative games in Fortnite for mapmakers. Some of them love to torture their players with excruciating difficulty in their deathruns, perhaps to emphasize the death while they run. Our codes list below combats that idea by providing fun deathrun maps without painstaking difficulty. If you want to relax and make deathruns a casual and social experience, we have you covered!

Although it's up for debate on whether this game is easy or not, we wanted it to have a special mention on this because of it's simple concept: a deathrun where you must rely on luck to jump your way from one end of the room to the other. Having been inspired by the Squid Game series, most players will recognize the similarity: you begin on one side, and must take a 50/50 chance with every jump. One option leads to elimination, and the other only leads you closer to the end.

While some people play easy deathruns because they want a casual experience to enjoy with their friends, some use them to set the best records and give other players a reason to compete. This map is the second map we've featured by developer R15_Lestremon, and it works great for either goal. If you fancy yourself a challenge, try to beat the record in the video above. Otherwise, start your dive into the world of Deathruns with this casual experience—the way its meant to be played!

If you are looking for a deathrun map that's easy and occasionally funny, you'll enjoy this map by R15_Lestremon. You can purchase objects to help you at the start of the map, but only if you earn enough coin! This adds some re-playability to the map, as you'll be able to use special tools in each round that either help you finish faster, or slow down anyone racing against you!

This map was created by popular YouTuber CanDook, who has been featured on this and many other Fortnite code lists we have. Parkour Fun Run emphasizes the laid-back and social aspects of playing Fortnite Creative, as it features over 350 levels of easy jumps and simple puzzles. It also has many secrets for you to discover and even challenges players to unlock achievements!

Anyone who plays Deathruns more for the social interaction than the competition will tell you that the longer the deathrun, the more fun it is. You can easily spend hours completing minor challenges while having a good time with your friends in this simple deathrun with over 300 levels. No need to make it a competition to race to the end—it's all about the journey on this fun map.

This is a new Deathrun map that came out during Chapter 3 Season 1, so it's built to include all the fun, new mechanics in the game. It was so well designed that it ended up making it to the list of Epic's Picks. This map features 10 themes of 20 levels each, ranging from a Wild West theme to a Winter Wonderland!

Short, sweet, and to the point. 80 Level Default Deathrun is a high quality, easy challenge that brings your standard deathrun mechanics and doesn't include any excessively difficult challenges. This deathrun is the perfect map to play with friends over casual chat rather than trying to outrun and outskill them. If you're new to the deathrun game mechanic or just want to refresh your reflexes, this is the best map for you.

When you've finished the 80 level deathrun above, you'll want to give Apfel's 120 Level Default Deathrun a try. The challenge rating doesn't increase, but it adds more levels for players to up their skill in the classic creative gamemode. Apfel is a well known map maker that has made over 100 maps, so you know they have the experience and ability to make high-quality maps that provide exactly what they say they will.

This is a 50 level of easy parkour. It starts off easy as pie, then progressively gets a tiny weenie bit harder but it was created in mind so anyone can complete it. Even if you are horrible at parkour, honestly, you have the chance of completing this deathrun.

Fall Guys has taken the world by storm and is quite a popular game among just about everyone who can access it. If you haven't gotten a chance to play it yet, then you can give this Fall Guys themed deathrun a shot that might at least give you a taste of what you are missing.

While this looks very simple, it's a pretty great design and the visuals are quite interesting to see! This utilizes a bunch basic shapes with a nice color palette that looks quite stylish! While this is an easier deathrun, it will still pose enough of a challenge to give you some good practice for future maps!

Another great summer deathrun that is relatively easy, and has a whole lot of levels that will have you sliding around and bouncing off of obstacles. You can use impulse grenades to get around, and even do a bit of surfing to make it across one of the levels. There's another one that I haven't seen before, which is you need to run through the obstacle quickly because you take damage! If you go too slow, you'll be brought back to the beginning. There's a Slurp Juice waiting for you at the end of that level to get you healthy again. If you are just starting out in these, I would hold off on this one for a bit, because it's slightly more difficult than some of the others.

You'll need a code to play any Fortnite map published in Creative or Playground modes. With it, you can play that map with other players. You can enter Fortnite Deathtun codes quickly.

If you wish, you can enter Fortnite Deathrun codes in-game. Go to any island in the Welcome Hub, enter the code, and the map will be accessible.

A Fortnite deathrun is a type of map in which your goal is to reach the end of the map by jumping over, through, or around traps. Most deathruns have hundreds of levels, each of which only takes a couple seconds to complete. They can be considered puzzles since you generally need to figure out a method to get around the obstacle, but players usually consider deathruns to be a good way to show off your parkour or maneuverability in Fortnite.

For more Fortnite News & Guides, check out Fortnite Best Skins Ranked, How to get the Volcanic Assassin Quest Pack for free in Fortnite on Pro Game Guides!