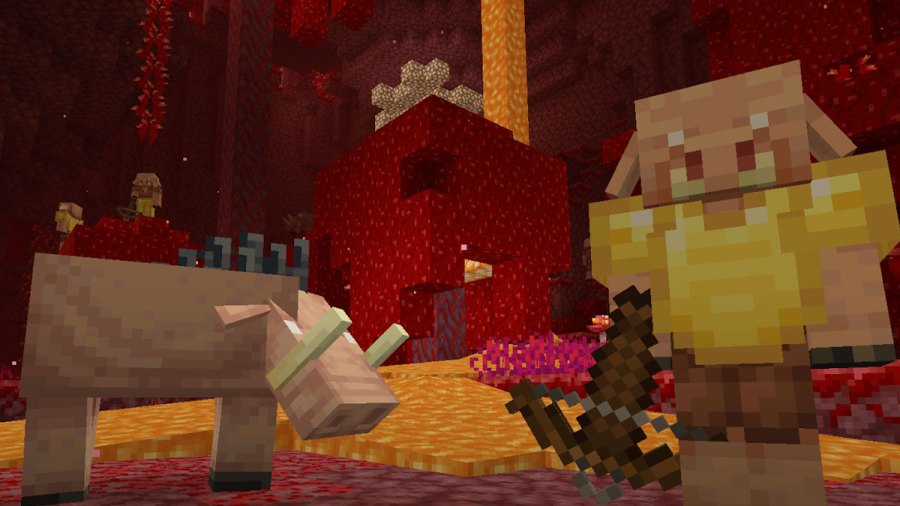 We're looking at some of the Best Minecraft Pocket Edition Seeds you can find! These will make starting a new world a lot easier and give you a leg up on having an epic place to build your next creation. In our list below, we've included screenshots of the major highlight from each seed, a description of what you will find, and coordinates for key starting areas.

If you're playing on PC or another device, head over to our Best Minecraft Seeds or Minecraft 1.18 Seeds posts for our best Java and Bedrock seeds!

This survival island is for beginners and casual players. You spawn on the edge of an ideal Jungle Island that is home to multiple small biomes, including a lush cave that is nestled perfecting underneath the deep Jungle that fills up most of the island. Players that play on Minecraft PE will also be fond of this survival island for how easy it is to set up a large, but safe, home base.

This seed is not for beginners. You start off on a stony island with limited resources: three trees, some animals, and a portal to the underworld. The Nether is known to be a huge challenge for new players, and this seed places you on an island where the only direction to go is down. Of course, you could build a boat with the trees, but that defeats the purpose of spawning on the perfect hardcore island!

This seed sets the gold standard for biome-diversity in Minecraft PE. You spawn on the border of a biome split of damp Jungles, arid Deserts, and temperate Badlands. Given that a variety of biomes are essential to any good Minecraft experience flush with resources, this makes this the perfect seed for beginners and casual players. It's not bound to just warm biomes, though! You'll find over

It took nearly a decade for Minecraft PE players to play cross-platform with their friends, so they're no strangers to isolation in Minecraft Survival. This seed represents that solitary playstyle because you start on a large island with only one Village to keep you company. However, you'll find unobstructed beautiful views and ample resources when you spawn on this large, mountainous island. The imagery is so magnificent, you likely won't even notice that you're playing on a smaller screen!

This seed reminds us of how civilizations are built on top of older buried ones! This seed spawns us in front of a beautiful, yet unassuming village around a mountainous formation. However, its real secret lies withing. Digging through the rock will lead you to a grand old Ancient City, complete with a Stronghold, Mineshafts, and even a Ruined Portal. No wonder these townsfolk never need to leave their small island!

This was one of the first seeds that caught the public eye in Minecraft 1.19. It proves to be an ideal seed for players who want to appreciate the beautiful the Lush Cave, but also want to explore the new Wilds Update biomes. You start in an area that is near most of the overworld biomes, so most resources are quickly available to you. A couple of hundred blocks away, there is a Lush Cave that branches into an Ancient City and causes one of the most fascinating transitions between biomes. There are also two exposed Mineshafts in the Lush Cave!

Minecraft 1.19 couldn't have made world generation more interesting. You begin this seed on the edge of a Desert biome that is touching a Mangrove Swam. A short walk from spawn will take you to one of the most peculiar combinations of structures we've ever seen. This Desert Village is morphed with a Shipwreck, Nether Portal, Outpost, and Desert Temple! With all these uncommon and rare structures right next to spawn, you have plenty of gear and valuable resources available to you to get a head start on the map!

You might be playing Minecraft on a small screen, but you'll feel like you're living the rich life with this wonderful double-mansion seed. This is the perfect Minecraft Wilds PE seed if you want to establish more of a story in your survival world. You will also find almost every biome within a 2,500-block radius of spawn!

In this fascinating seed, you start next to a village in an impossible situation. We say impossible, because the only way for this to happen is that one villager fiddled with Spacetime and accidentally warped an entire Chunk out of place. Whatever the reason for this crazy situation, it works well to protect them from the Pillager Outpost that spawns only a short distance away!

If you're looking to live a life of vikings and pirates, you cannot go wrong with this seed. In this seed, you spawn in front of a plains village which is tucked inside a cove, overlooking a vast cold ocean. The village has crops, huts, and wooden jetties. It also has a Shipwreck right next to it, which is perfectly positioned for making a boathouse out of its vessel. Additionally, around the spawn point are multiple channels of rivers for if you wish to sail to neighboring biomes with ease.